My favorite romance movie is undoubtedly Rocky.  People who have not watched it recently, who have memories of the later Rocky films cluttering their memories of the first, do not tend to think of it as such, but Rocky is a love story.  Rocky’s burgeoning relationship with Adrian is at least as vital to the films plot as boxing is.  But the image of Rocky in pop culture is more about the vibrant, outrageous sequels than the somber and contemplative first movie.  All that anyone usually remembers is that Rocky loses at the end and even that I would say is wrong.  At the end of Rocky, the eponymous lead has won all he ever wanted.

The best and most enduring element of this movie is the title character.  I defy anyone to watch Rocky and not empathize with the beleaguered boxer.  Though I call the movie a romance, as the title would suggest this is very much Rocky’s story.  His romance of Adrian may be the central plot, but the story is told from Rocky’s point of view.  The movie quickly establishes Rocky as a down and nearly out man.  His boxing career is going nowhere and the proprietor of his gym wants him out.  To make ends meet he works as leg breaker for a two-bit loan shark.  Rocky is also show to be honest and an all around good guy.  He clearly works for the loan shark only reluctantly.  Rocky tries to help a young girl who is hanging out with a bad crowd, only to have her throw his advice back in his face.  What Rocky seems most interested in doing is chatting up the shy pet store clerk Adrian. 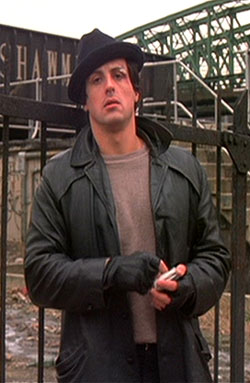 One of Rocky’s several opposites is his friend Pauley, Adrian’s brother.  He is cruel and dismissive of his sister, though he does care about her.  Where Rocky hates having to work for Gazzo, Pauley wants to do it.  Pauley is sad, pathetic, and mean, but he is one of Rocky’s few friends at the start.  Another is Apollo Creed.  Creed is one of the things that make this first movie so interesting.  There is no villain in this movie, like Clubber Lang or Ivan Drago from later movies.  Apollo is whom Rocky fights at the end, but his portrayal very sympathetically.  He may be cynical, but his cynicism is what lands Rocky his big chance.  Apollo is what Rocky wants to be.  He has a successful boxing career; he is intelligent and eloquent.  He has all the qualities that Rocky wants.  Then there is Mickey.  Mickey is Rocky’s future.  He is what could happen to Rocky forty years down the road, after life gives Rocky it is last few knocks.
The big fight with Apollo comes into the movie late, for most of the film Rocky is trying to woo Adrian.  He spends time coming with bad jokes to tell her.  He stops by her pet store twice everyday.  Adrian is reluctant at first, but after a push from Pauley, she starts seeing Rocky.  Adrian is who Rocky loves, but Rocky mostly wants someone to care about him.  She is incredibly shy and repressed at the beginning, but Rocky is eventually able to draw her out of her shell.  Their deepening relationship takes up most of the first half of the movie.

After Rocky agrees to fight Apollo, all the people who wanted nothing to do with him before come to him for help.  Instead of dismissing them outright, Rocky lets those who can help him help him.  Mickey originally was trying to run Rocky out of his gym, but afterwards he sees Rocky as his last chance to matter, Rocky proves his caliber by agreeing to let Mickey train him.  Once the unforgettable training montage starts, Rocky becomes the greatest sports movie ever.  Despite knowing that he is completely outclassed Rocky knows that this is his last and only chance at mattering and he has to give it his all.  The fight highlights the differences between Rocky and Apollo.  Apollo is a showman; he is putting on a performance for the crowd. Rocky is workmanlike, he simply puts his head down and goes to work.  No one takes Rocky seriously until his is able to down the champion.  After that, Apollo shows his other side, the ruthless fighter.  Rocky just continues as he started.
Possibly my favorite sequence in any film is round fourteen.  Both fighters are exhausted, especially Rocky, but they continue to go at it and one of the announcers, who really help make the fight scene, exclaims, “What is keeping him up?”  That question is the essence of Rocky’s, both the film and the characters, appeal.  He may go down, but he will never stay down.  When Apollo does knock him down everyone expects him to stay down.  Apollo dances victoriously, Mickey tells Rocky to stay down, Adrian finally finds the courage to watch the fight, and music the crescendos as Rocky shows his unbreakable spirit as he climbs to his feet.  Apollo, who despite his early lackadaisical approach is show to be a supreme competitor, stares in disbelief.  After that moment, the outcome of the fight is all but irrelevant. 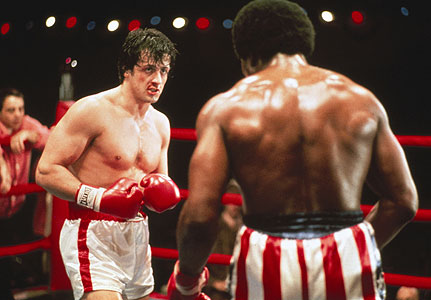 When the fight does end, it is interesting to note that the judge’s decision is drowned out by Rocky’s cries for Adrian.  The only way the outcome is known is by Apollo’s reaction.  The movie does not hinge on the outcome of the fight, but on Adrian’s joining Rocky in the ring.  Like when he is interviewed after accepting the fight he has no answer about how he intends to fight Apollo, but he does remember to say hi to Adrian on TV.  Adrian proves to always be more important to Rocky than fighting.  And the romance is more important than the boxing.