I didn’t do enough reading in September; of course, I often say that no matter how many books I read. My goal is four books, though, and I didn’t reach that milestone this month. I just didn’t spend the time reading that I normally do. I expect to get more reading done in October, though I don’t know how much more. Probably the next Outlander book, a Christie and maybe something more. 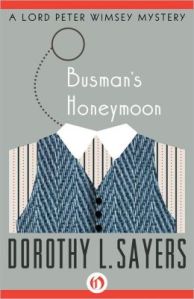 This is the final Peter Wimsey mystery and I didn’t like it much at all. It was apparently adapted from a play, and it reads like it. Much more of the story is told through dialogue with minor characters, with much less time for the protagonists. This story does include Lord Peter and Harriet’s wedding. That early section of the book is great, but it has little to do with the mystery. It goes on for a good quarter of the book and gives a nice send off for some of the smaller supporting characters. Then there is the mystery in the middle; this is the part that feels like a play adaptation. The majority of the dialogue is told through cumbersome dialogue. It also makes it harder to get into the mystery. That mystery is also meaner than the norm for this series. It ends with what feels like a final wrap up. Lord Peter is less sure of “hobby” as a detective now that he is married. Also, he was disgusted by the petty monstrousness of this case. It provides a fitting, if somewhat depressing, end to this series. 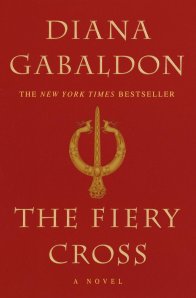 This fifth volume of the Outlander series follows Claire and Jamie as it draws close to the start of the American Revolution, as well as a community starting to form around Fraser’s Ridge in the North Carolina back country. The Fiery Cross largely continues plotlines started in the last book, like dealing with the despicable Steven Bonnet and the growth of Brianna and Roger’s relationship. It seems significantly slower paced than previous books. The first quarter or so of this 1000+ pages long book take place at a Gathering of emigrated Scots, where both Brianna and Rogers and Duncan Innes and Jamie’s Aunt Jocasta’s weddings are scheduled. Little events, eventually important little events, keep dragging this scene out further. It is simultaneously amazing that Gabaldon keeps the scene moving without really moving anything and frustrating that that is how the book starts.

The one big development in this book is the complete dismantling that Roger goes through. He was a university professor in the twentieth century, with skills that aren’t exactly useful in the frontier of the eighteenth century, but he made due. Over the course of this book, Roger is crushed even further down. His attempts to learn to shoot end when he discovers that he is physically incapable of being a good shot. While early in the book he is lauded for his musical skill, which is soon taken from him as well. There are always difficult trials that characters face, but few times in this series has a character taken the brunt of misfortune that Roger faces in this book. While this book does move ponderously at times, there is a central mystery that ties it together nicely.

The Guns of August

This is an exhaustive look at the first month of the start of WWI, as well as the days the immediately led to it. It is a fascinating read, illuminating the characters of the men in charge while also clearly illustrating the sequence of events. What comes across most clearly is the arrogance of everyone involved. The French had their plan if it came to war, and they were going to stick to it no matter what the situation actually was. The Russians were completely disorganized and incompetent, with their entire government crumbling. Germany was flush with economic and military success and eager to expand their country. All of them thought any conflict would be short lived and decisive. That arrogance is most apparent with Germany’s decision to invade Belgium. If they would have avoided it, then there was a good chance that Britain would not get involved or at least not involved as fast. But they didn’t think that Belgium would fight. The idea that they might not like the idea of being conquered by Germany seems to have never occurred to them. They somehow didn’t expect the reaction they got for burning their way through a country that had been neutral. The personalities of the leaders come through, as well. None are shown to be true villains, but neither are any portrayed as heroes. One of the most fascinating was Joffre, the Commander in Chief of the French Army. He stuck to his initial plan, despite what the Germans were doing not matching what he expected. But he also helped maintain control during their retreat without breaking.

The one weakness of The Guns of August is that other that a few chapters covering a naval engagement and Russia’s disastrous campaign against Germany in the East, it is almost totally about the Western front. Weakness isn’t really the right word, I guess. That’s just not what the book is about. For example, it does give just enough of a glimpse of the goings on to make me want to know more about Russia’s war with Austria. Still, I am sure there are other books about that very subject; I just need to read one of those.