Wayforward does good work. They are the go to company for solid, if only rarely spectacular, licensed games as well as updates on classic games. They are the ones behind games like A Boy and his Blob, Contra 4, DuckTales Remastered and Batman: The Brave and the Bold. As good as those games, as well as a couple of handfuls of others across primarily the Wii, DS and 3DS, are Wayforward has always done their best work on their original titles. Those include the Mighty games – Mighty Switch Force, Mighty Milky Way, etc. – and the Shantae games. When Wayforward went to Kickstarter to fund the latest Shantae game, Shantae Half-Genie Hero, it seemed like the surest possible bet. While the game missed its projected release date by more than a year, the finished product turned out to be everything fans hoped it would be. 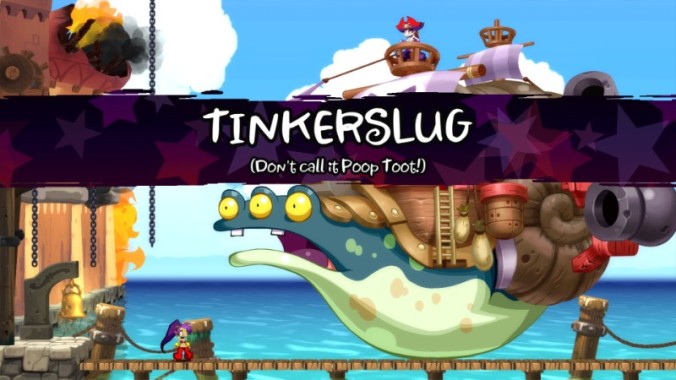 Shantae: ½ Genie Hero breaks no new ground. While its story doesn’t pick up from its predecessor Shantae and The Pirate’s Curse, the gameplay doesn’t stray far. The biggest difference is in our heroes abilities, with Shantae reverting to her dance triggered transformations rather than relying on skills like those of Risky Boots. The same transformations that she used in her first two games. Well, not exactly the same, but similar. Still, while Shantae is a riff on the same kind of game people have been playing for more than 25 years, everything about it is so well done that it just warms the heart.

First of all, the graphics and sound are excellent. It shares a general look with DuckTales Remastered, but it simply looks better. It is not the pixel art of previous games, but it is fluidly animated and is frankly one of the best looking 2D games I’ve ever seen. It still has that usual Shantae look, which includes a lot of cartoonish voluptuousness for better or worse, and Sequin Land has never looked so good. The game also has some great tunes, I don’t know how else to say it, they are just some awesome listening. 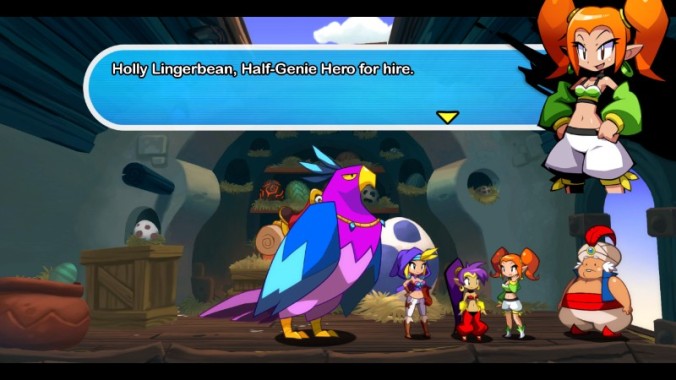 Gone is any sense of this game as a sort of Metroidvania, the game is strictly level based. Each level has two or so distinct areas and while each area has places to explore, the play out completely linearly. The stages are largely really well designed, each with distinct challenges. One takes place in the air during a flying carpet race. Another has Shantae lost in a spooky mansion. While they don’t really break any new ground, they are interesting and fun to play though. The linear nature makes for some awkward bit, when you must go back to stages to look for doodads and power-ups. It is tempting to run back to each stage after completing the next one and getting a new power-up, and the game encourages this by gating the unlocking of the next stage behind completing some tasks for the townsfolks. They are not onerous tasks and the time spent searching for whatever the citizen or Uncle Mimic needs can also be used to scrounge up extra hearts and collectibles. They are fun to explore, up to a point and by the end of the game it reaches the point where it stops being fun and starts being a little tedious. 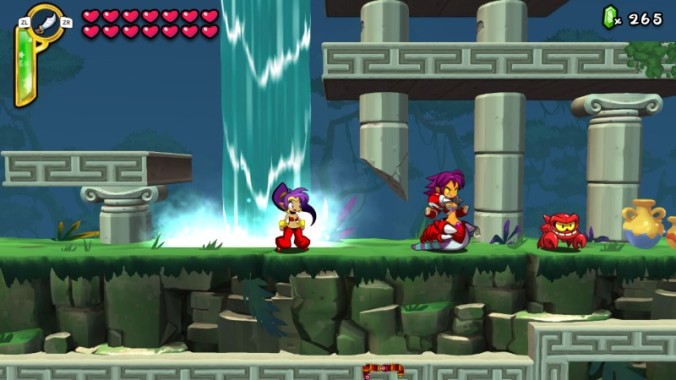 Shantae controls as well as usual. Unlike the original GBC game, her hair actually feels like it has sufficient length to make a good weapon. I did have a little bit of a problem with the difficulty curve. The first stage, after the quick opening one, is likely to be the most difficult task in the game save for the final level. You haven’t really had a chance to get any extra hearts or power-ups at that point, so it is all about the player’s skill. After that, when the player gets more and more hearts and finds numerous healing items, the folds like tissue paper. Until the last stage, which is suitably challenging. 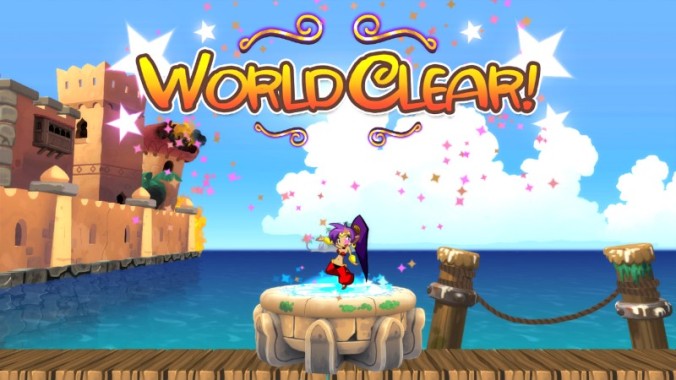 Most of my complaints here are nitpicks, reasons why Shantae: ½ Genie Hero is not the best game ever, merely an extremely good one. My expectations for this series grows with each game I play, and each time the new game exceeds them. I don’t really know is this game is better than the previous one, but at the very least it is as good. Shantae: ½ Genie Hero joins Shovel Knight as one of the best Kickstarter triumphs.