The week of the 4th of July has really messed up my ability to get together posts for my fledgling blog, but this week I plan to review at least one more season 1 episode if Futurama and the new episode, with a mention of last week’s new ep.  Also at least one more installment of 25 Years of NES and one movie review.  There are many other things near completion that I hope to get out, but we’ll see.  On the the comics.  It was a big week for me buying comics and all in all a good one.
Flash 3:

Written by Geoff Johns and drawn by Francis Manapul and Scott Kolins.
The new Barry Allen Flash series continues to be one of the best books coming out.  This issue continues the Flash’s struggles with the Renegades, doppelgangers of Flash’s Rogues from the future, and with the resurrected, original Captain Boomerang as he escapes from prison.  The art is distinct.   I do not possess the vocabulary or knowledge to accurately describe it, but I do know that it is unlike most other comics.  Johns is also doing a good job of setting up Barry and Iris Allen.  I would agree with the complainers that so far there is no reason the series could not have starred Wally West, but it doesn’t.  There have been 20 years of Wally stories, if the man who writes the best of them wants to write some great Barry stories more power to him.  And these have been 3 really good issues.  Barry is a hero through and through.  Instead of focusing on all of the implications that paint him as a murderer, he is helping someone else who has possibly been wrongly imprisoned.  Iris is helpful and equally busy.  Yes, so far, Barry has acted like Superman, but since DC has Superman doing other stuff, maybe Barry can become the moral center of their universe.
Green Lantern 55:

Written by Geoff Johns and drawn by Doug Mahnke.
It’s big, loud, dumb and almost perfect.  Hal, Carol, Sinestro and Atrocitus fight with Lobo.  The leaders of four of the seven color corps throw power ring constructs all over the place in an over the top fight with one of superhero comic’s most over the top characters.  Lobo is a character, much like Marvel’s Deadpool, that is great in small doses but is easily over used.  His one issue appearance here is definitely a good thing.   Mahnke’s art is as over the top as the story.  This issue is just pure fun.  And the ending with the origin of Dex-Starr is both silly and somewhat touching.  While I was not a huge fan of Blackest Night, the Green Lantern book has come out of it still being great.
Justice Society of America 40:

written by Bill Willingham and drawn Jesus Merino.
This is the rather lackluster end to what has been a pretty good alternate reality story.  Obsidian returns and the JSA beats the bad guys.  I really do not know what to make of this issue.  It seems like it is either the last couple of pages of epilogue from the previous story extended to a full issue or 3 issues condensed down to one because after this James Robinson is taking over for three issues for a JLA/JSA crossover and Willingham could not set up the next story or fully finish this one.  So what is here is a few fun moments and lost of Obsidian monologue telling the reader what happened.  Everyone knows how this was going to end, so the least I expected was to be shown it in an interesting way, not having is flatly recited to me.  Not a good issue.  I’m growing increasing shaky on what is my favorite superhero team, especially since most of the interesting characters, Power Girl, Star Girl, Liberty Bell, Hourman, are going or gone.
Justice League of America 46: 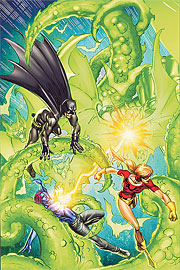 written by James Robinson and drawn by Mark Bagley.
Robinson’s JLA/JSA team-up ramps up.  The story itself is actually pretty good.  The Starheart, a chuck of which is the source of Green Lantern‘s (Alan Scott) powers and through him powers his children Jade and Obsidian, is on Earth and driving many super powered individuals crazy.  It is an interesting start to the team up and a good way to involve both teams.  But his dialogue is terrible.  Jesse Quick, up until recently known as Liberty Bell, only thinks of her dad.  All the time.  Donna Troy rambles idiotically in what I believe is supposed to be funny dialogue.  Mr. Terrific talks down to Power Girl and she takes it.  Any of the instances could be forgotten, but they pile up enough to leave a bad taste in the reader’s mouth.  I’m sticking with this title through the team up out of love for the JSA, my interest in the line-up Robinson has for the JLA and my previous enjoyment of Robinson’s writing in Starman and JSA.  After that, I may drop both Justice team titles.
Thor 611:

written by Kieron Gillen and drawn by Rich Elson.
This is my attempt to get back in to Marvel after a series of terrible events, culminating in the horrendous Dark Reign, thoroughly destroyed most of my interest in the line.  But the “Heroic Age” sounds good, so I’ll look.  And seeing how Thor is the best Marvel hero, I started here.  Not bad.  The Asgardians mourn Loki; they question the leadership of Balder and the Desir plot to destroy the dead Asgardians.  I do know of the bulk of the events from Siege even though I did not read it and I read most of JMS run on the title, so I’m not completely lost.  This issue is not great, but it is pretty good.  If the next issue pays off the set up in this one I’ll be happy, but this is not getting me too excited.
Wonder Woman 600:

So to cap off the month we get Wonder Woman’s big anniversary issue to go along with Superman’s and Batman’s.  It is also the start of Straszynski’s run on the title.  The first story is written by outgoing writer Gail Simone and drawn by the person responsible for Wonder Woman when she was the best George Perez.  It starts with a team up of numerous super heroines to defeat the “Cyber-Sirens.”  It shows how all of them look up to her and how Wonder Woman is the greatest.  Then she skips out on the President to attend Vanessa Kapatellis’ graduation.  I really liked this story.  Perez is one of the best artists in the business and Gail Simone has few misses on her record.  I can’t help but see the end of this as a bit of delayed backlash against the writers who came after Perez (Messner-Loebs and Byrne used other characters, Jimenez destroyed them) that ignored the great supporting cast he set up.  To see Vanessa recovered from the indignities put upon her in bad stories that made both her and Wonder Woman look bad feels great to those who read and loved Perez’s WW.  The next story is written and drawn by Amanda Conner and is the best thing in any book this month.  Power Girl, (I love me some Power Girl, especially drawn by Amanda Conner) Wonder Woman, and Batgirl beat-up Egg-fu (basically super villain Humpty Dumpty) then PG and WW go to PG’s place so WW can tell her what’s bothering her cat.  It’s cute, funny and gives me hope for more WW PG team ups.  Next is Louise Simonson and Eduardo Pansica’s story where Superman and Wonder Woman team up to take down a terrorist who stole Zeus’s lightning.  It’s adequate.  I had to reread it even after taking some review notes to really remember it.  It is followed by Geoff Johns and Scott Kolins’s pointless lead-in to JMS’s story.  This was the most disappointing story because I really wanted to see Johns write Diana.  No writer is better at distilling why a character is cool into one sentence that can be used for years worth of stories.  Sure, his takes are often simplistic, but they lay great groundwork for other he and other writers to build on.  When he’s used Wonder Woman, it was generally in stories that were not about her and she did not feel right.  There was not enough to this story to even get that feeling.  Though the panel of young Diana staring out to sea wanting to see what else was out there was great.  Also in the issue were some great pin-ups by Adam Hughes, Francis Manapul and Phil Jimenez and one truly horrible one by Jock.
Then there is JMS’s highly anticipated debut.  I don’t like it.  The story could have potential.  It is going to end with the majority of her history restored to normal, maybe all of it, but the how could be intriguing.  The marketing is turning me off, as is the new costume.  WW old costume was just as messed up as Superman’s and Batman’s.  They are Superheroes; they are inherently ridiculous.  That is the fun of the stories.  And WW wears a patriotic one-piece bathing suit.  She looked like some sort of magical hooker.  DC decided to change this by making her look like an actual hooker.  They did not take out the suggestive part, they took out the magic that makes it okay.  And it’s not like this an original story.  Writers since Perez, except Simone, have destroyed Themyscira and the Amazons, only to return them with their version.  I see no reason to believe that this will be different of better.