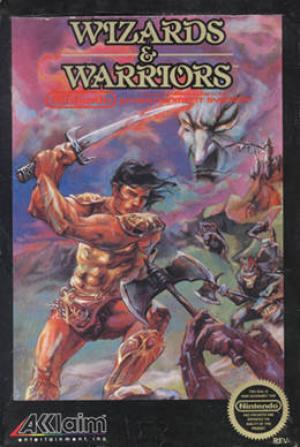 Wizards and Warriors is not a game often mentioned in best on the NES discussions.  With good reason, the game is kind of a mess.  Players assume the role of Kuros the warrior as he fights literally through hell to save a Princess from the evil wizard Malkil.  Published by Acclaim in 1987 and made by Rare, makers of Donkey Kong Country and Banjo-Kazooie, Wizards and Warriors is a standard NES action/adventure game.  It is an unexciting but enjoyable mix of Metroid and Ghost and Goblins.  There are, however, a few things that make Wizards and Warriors stand out a bit from the crowd.

The game controls rather well.   There is nothing exciting about the way Kuros moves, but it is better than many games on the system.  It avoids the wonkiness of NES trash like Might Bomb Jack or Legend of Kage, where the jump button sends the player flying all the way across the screen.  It takes its jump physics from Mario, with the ability to alter the trajectory of the jump after you hit he button.  The jump is especially important considering how pathetic Kuros sword is.  Pushing the B button swings his sword, but it has no range or reach.  Luckily, he holds the sword out as he jumps and runs it into enemies.  He can also hit enemies with his feet, making the jump a superior weapon than the sword swing.  That alone creates an interesting game play dynamic. 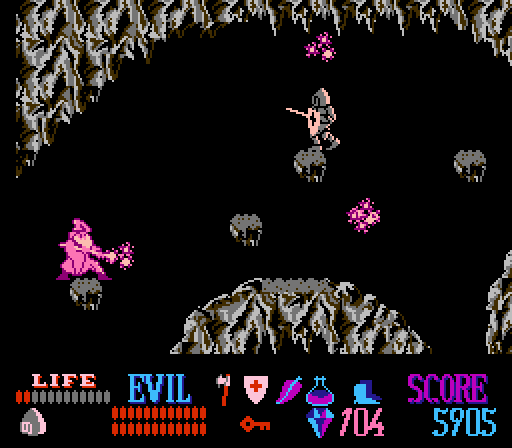 The levels are not flat plains like the Mario, more like mini Metroid maps.   Each level is a small area that the player is free to traverse, with the objective not reaching the end, but finding the gems needed to bribe the door guard into letting you pass.  Yes, Rare fondness for collectathon bullshit was prevalent even back in the NES days.  Not that this example is particularly egregious.  While the exploration elements of the levels are fun, that fact that you cannot progress with enough gems is annoying.

That is only annoyance number one.   To go along with your sword, you get several sub-weapons to use.  First is the most important: the throwing dagger.  Much like the boomerang from Zelda, the dagger comes back after you throw it and is definitely your best offensive tool until you get the throwing axe, which is just an upgraded dagger.  Then there are the other upgrades.  Like the Feather of feather Fall, which is just as useless as it’s name is stupid.  Or the boots of Lava walk that do not actually let you walk in lava in the one level that has lava.  Or the cloak of darkness, which makes you invisible.  Unfortunately the enemies do operate on sight, but the player does.  So with the cloak on the player cannot see what he is doing, but the enemies can still get attack him.  What’s especially great is that the game seems to know these items are useless and loves to put them at the bottom of climbing areas so if you fall you fall in them.