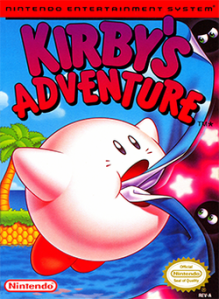 There is no question that Nintendo has one of the best stables of long running franchises in gaming.  They have Mario, Zelda, Metroid, Starfox and F-Zero to name several.  But one tends to get never get its due: Kirby.  Kirby has starred in more great games than many of Nintendo’s other stars, but his franchise often is treated like an also ran.  There are two reasons for this.  The first is that Kirby games are most often on handhelds, which small-minded gamers consider lesser than their console brethren do.  Of Kirby’s 20 games, 11 are on handhelds and it was 10 years between Kirby 64 and last year’s Epic Yarn. The second reason is that  Kirby’s console games often come out long after the console they are on has stopped being relevant.  The first of the two SNES games hit the same year as the N64 and the second the year after. Kirby’s Adventure came out a full 3 years after the SNES.  While its quality was recognized by those who played it, Kirby largely slipped by the dwindling NES audience.

Kirby’s Adventure is a very late NES game and it shows in many ways.  The graphics are easily among the best on the system.  It uses parallax scrolling to create the illusion of running around a two, a technique that gives it a pseudo-3D look.  The sound is wonderful.  On the audio and video front, the game is stunning. 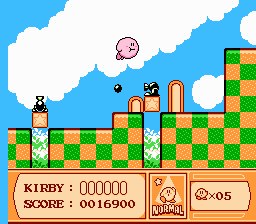 The game’s big draw is Kirby’s ability to suck in enemies and steal their powers.  There are numerous powers to steal, more that 20 but they are not all of equal use.  Some, like sleep or ball, are mostly useless.  Some are brokenly good, but have limited uses, like mike and crash.  The best powers are wheel and back drop.  Speeding and spinning across stages, as a wheel is terrific fun, as is suplexing any enemy you face.  Not every enemy will give you a power, but it is not hard to find them.  Finding new powers and experimenting with them makes Kirby a great game.  Each level has enough variety that you can play through the game multiple times. 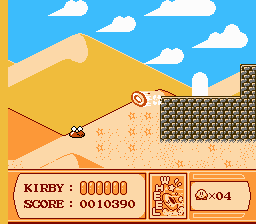 Unlike most NES games, Kirby’s Adventure is easy.  Really easy.  It was designed to be a game for beginners, and it shows in the difficult. Kirby can take numerous hits before he dies and in addition to all the powers, Kirby can fly.  So the enemies pose little threat and the stages are easy to navigate.  The slight difficulty works in the games favor.  Its breezy challenge goes perfectly with the puffy pink hero and the geography of Dream Land.  It is not a game of intensity and stress, but a cheery romp through a land made of clouds.

The last level is particularly fantastic.  After you chase down the series bumbling baddy King Dedede, retrieving the Star Rod that he had stolen, only to realize that he had stolen it to protect Dream Land from the resurrection of the ancient evil Nightmare.  So Kirby takes the Star Rod in hand and fights this villain, with some help from King Dedede.  The game suddenly becomes a shooter, with Kirby shooting stars with the rod and Nightmare shooting black stars back at him.  Then they land on the moon and have a final battle there that ends with Kirby defeating Nightmare while blowing a hole in the moon.  It is one of the best boss battles on the NES.

It is a widely believed fact that Kirby began as a placeholder sprite that eventually became the main character of his game.  Kirby is a simple looking character; the intro to Kirby’s Adventure shows how easy it is draw him, but even in the NES, the he had a lot of charm.  He makes goofy faces and mostly bumbles his way through his adventures, but his charm transcends his simple nature.  The same is true with his games.  They are often simple and easy, but they are charming and always fun. 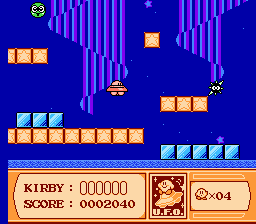 One thought on “He’s Probably Named after the Vacuums”