I was hoping to have a review of X-Men: First Class or Super 8 for today, but I did not end up seeing them as soon as I would have liked. (I have seen both now, reviews are forthcoming.) So instead, I decided to write a review of my favorite movie, Porco Rosso.

Yes, I have been known to employ a bit of hyperbole. Yes, there are a handful of other movies that I routinely pronounce as my favorite, but that should not diminish the brilliance of Porco Rosso.

Porco Rosso is a story about a seaplane pilot in the Adriatic Sea between the World Wars. It is full of wonder, nostalgia, and a touch of surrealism. The main character, called both Marco and Porco, is an ace pilot with the head of a pig. His physical piggishness is not fully explained in the movie, and it does not seem to be of much concern to anybody. It just is, and the film is not really about it. 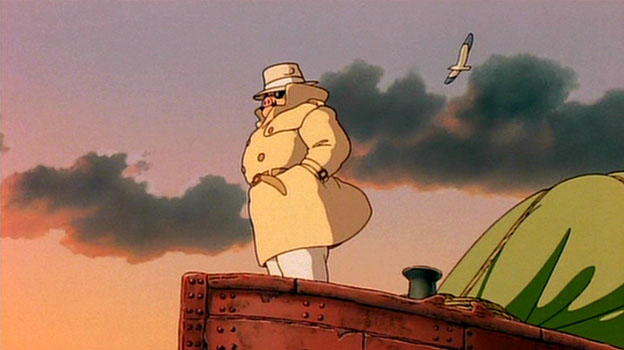 Porco is definitely a pig, though. Both literally, with the nose and ears, and figuratively, he is sexist, gluttonous, greedy and lazy. Porco is also a battle-scarred veteran, who is disgusted with his past and he has no faith in the future. He is not truly the pig he seems, his appearance as such is a fraud, a defense to keep the world that has hurt him at bay.

His supposed piggishness is shown in how he lives his life. He hates the fascist government that has risen to power in Italy, but he is not willing to do anything to combat them. Instead, he has set himself up a cozy scam thwarting the incompetent pirate gangs, but never apprehending them. Not that his employers care, everyone seems to enjoy the show that is their battles. Porco also hangs around his love Gina’s bar, though his self-loathing prevents him from pursuing her. 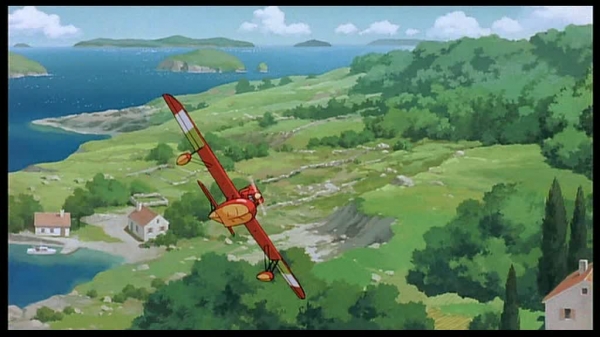 The plot mostly just meanders around for 90 minutes. There is no grand conflict, just a series of excuses for beautifully animated aerial dogfights and breathtaking vistas and landscapes. It is a slow, charming look at a world that exists no longer, a world that is fading even as the movie finishes, as well as a contemplative examination of the main character.
There are two changes in the life of the disillusioned pig pilot. The first, less important, change leads to the second, more important one. That first one is Curtis, the hotshot American pilot hired to take Porco down. He forces Porco to work harder than he has had to in apparently a long time. He can no longer coast on the pirates’ uselessness. He must also get the maintenance for his plane that he has clearly been putting off for some time. The second change is Fio, a young mechanic who disrupts Porco’s disillusionment. Fio is exuberantly optimistic, full of energy and life. She affects everyone she encounters, from Porco to the pirates to Curtis. In spite of Porco’s claim that he only fights for himself, she forces him to fight for her. She throws his piggish lie in his face, showing him the fiction of persona to which he clings. Porco is only a pig because he thinks he is. 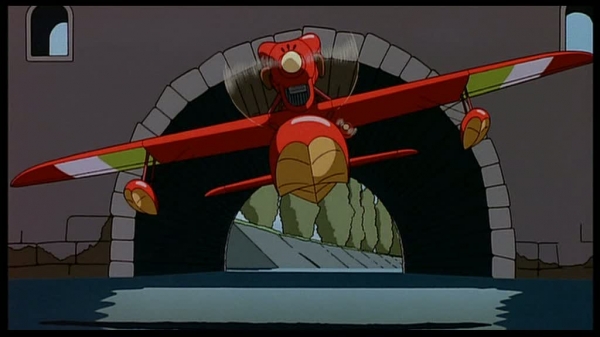 Besides Porco, what really shines through in this movie is Miyazaki’s love for flying machines. They show up in most of his films, but Porco Rosso is the only that focuses on ones that are more real than fiction. As much as it is about Porco, Porco Rosso is about the joy and wonder of flight. The wondrously crafted planes and vistas really get this across.

Porco Rosso is alternately somber and funny, exuberant and reserved. But it is always entertaining. It is truly beautiful. Yes, it is a kid’s movie about a pig that flies a plane, but it is also one of the most adult animated films ever made. Like the best of films from Pixar, Porco Rosso is truly a movie for everybody.

One thought on “Farewell to Freedom in the Adriatic”