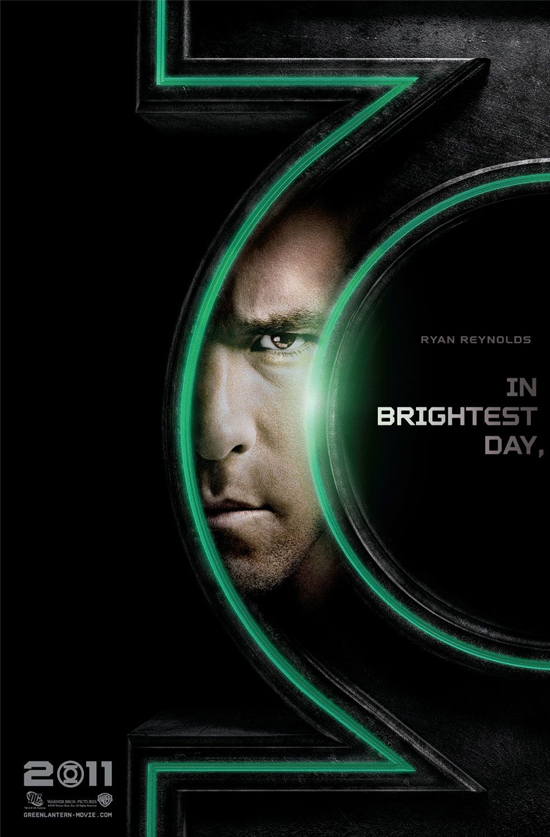 Green Lantern is about 5 years too late to the superhero movie party. Back when viewers were suffering through Daredevil, Catwoman, Fantastic 4, and Ang Lee’s Hulk (seriously, just because you like his movie about gay cowboys doesn’t make Hulk not a turd) Green Lantern would have seemed pretty good. It treats its subject with great, even undue, respect and is reasonably well acted. Unfortunately, in this post-Nolan Batman, post Iron Man landscape Green Lantern just isn’t up to par.

At the heart of Green Lantern’s problems is an odd dichotomy; the parts on Earth are much better than the parts set on Oa, the Green Lantern planet, but at the end you wish the movie had spent more time in space. The biggest difference between the two parts is that there are characters on Earth and plot devices on Oa. Ryan Reynolds as Hal Jordan is terrific. Hal has a decent character hook that the very things that make him good as his job whether as a pilot or Green Lantern, his cockiness, his fearlessness, also make him a jerk. The more likeable he tries to be, the less effective he is. Reynolds has good chemistry with Carol and Tom, his boss/ex and friend respectively. Moreover, Blake Lively does a solid job as Carol Ferris. Tim Robbins is decent as a blowhard Senator, being both likeable and phony. Peter Saarsgard’s Hector Hammond, one of the villains, starts as a sniveling creep and becomes progressively weirder and disconcerting as the film goes along. While the set-up is little more than generic superhero movie, it is done with enough competence to not be sunk by the weak plot.

On Oa, though, there is just Hal and Sinestro. Geoffrey Rush is wasted as the exposition spouting Tomar-Re and the usually great Michael Clark Duncan does not work as the piggish drill sergeant Kilowog. Both of these aliens and the rest of the numerous Green Lantern Corps seen a few group shots, have the same problem: they are not characters. Whether they exist as nods to the fans or just to sell action figures, outside of their brief interactions with Hal they don’t seem to exist at all. Sinsestro, played by Mark Strong, is great. He is arrogant, dismissive and powerful. More of him would have definitely been welcome. While the Oa story beats were not well done at all, that is what separates Green Lantern from other superheroes. The movie, though, just doesn’t make Oa seem alive. This looks especially bad when considering how well a similar idea was done in Thor just a couple months ago.

The biggest problem with the movie is how jumbled the narrative is. The plot moves in stops and starts, never building up any momentum. There are several scenes that have no purpose, like Hal’s nephew’s birthday party. It seems like much of it was done to fit Green Lantern into the standard superhero origin, though that didn’t work. There are also odd tonal disconnects, like everyone on Earth treating the ring like a joke but it being deadly serious in space. The plot and tone of the movie often just don’t make a lot of sense.

One part of Green Lantern that has been unduly criticized are the special effects. All of the aliens, for all the more that they were in the movie, look good. The ring powers can be a little harder to accept, because it idea of objects made from glowing green energy is inherently unreal. The 3D is, as 3D always is, a waste of money. That is really no fault of Green Lantern’s. 3D is a stupid, expensive fad that really just needs to die. I’m tired of seeing dark and muddy movies. Other than the usual 3D gripings, Green Lantern had a good, distinctive look.

The likeable cast buoys this film some, despite the wobbly narrative. It feels like somewhere there was a strong movie that was buried under the cliché that it could not free itself from. Green Lantern is not an especially bad movie, and it is certainly better than the crap that clogs up the bottom of the superhero pool. It is unfortunately about 5 years behind the times.

One thought on “Not the Brightest Day”