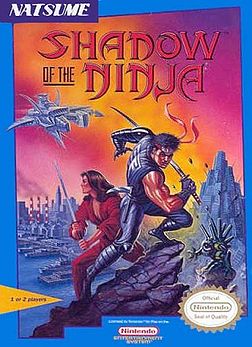 Natsume today is known mostly for the Harvest Moon series, but that wasn’t always the case. While they were never quite on the level of Capcom or Konami, Natsume published quite a few quality games over a variety of genres for various systems until basically the PS1/N64 era. Like any Japanese game company worth its salt, Natsume published some fine NES games. None of them seem to have been very popular, but the ones I’ve played are solid games. I’ve played a bit of Shatterhand and poured over an issue of Nintendo Power about the unfortunately named S.C.A.T, though I never actually played it. After reading this Hardcore Gaming 101 article, I decided to rectify that and downloaded Shadow of the Ninja off Virtual Console.

Shadow of the Ninja is pretty much Ninja Gaiden, with a splash of Contra. It plays basically like Ninja Gaiden, though a touch slower. It isn’t quite as fluid controlling as Ninja Gaiden, but it does try to do more than just ape the more popular game. That is where the Contra part of the equation comes in. Shadow of the Ninja features simultaneous co-op play. One player controls bluish dude ninja Hayate and the other brown (pink?) chick ninja Kaede. I actually got to try out the multiplayer with my brother, ad it works pretty well. There is some noticeable slowdown, but not enough, at least in the first level, to hamper the play experience too much. 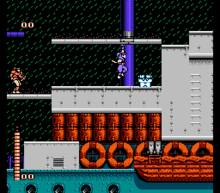 In single player, you can choose which of the two ninjas you play as, though as far a I can tell there is no difference between them. The game starts the player with the standard katana, with other weapon available to find. There are throwing stars, with are limited in number but just as powerful and longer range than the sword. Then there is the other main weapon, the chain sickle. It is an interesting weapon. It has a longer range than the sword, both in length and in that it can be aimed up and diagonally, but it is useless at close range. Despite the sickle being more interesting and unique, I found the katana to be much more useful. It is just easier to use. The sickle changes the way the game is played and it is already hard.

Boy is it hard. I never made it past level 3. It starts out easy enough, but soon the enemies take a stupid number of hits and the bosses get harder and harder. Still, one expects NES games to be hard. The only problem I have is that the player effectively only has 5 lives to beat the whole thing. If I still had the patience that I did when I was 10 I could see myself wasting days and days playing this game. The enemies could have their hits halved and they could cut the part where you power-ups disappear when you get hit, which happens so frequently as to make the power-ups useless, but it is no more flawed than plenty of NES games that are called classics nowadays. Its not like Ninja Gaiden is perfect.

The graphics are pretty much standard NES. The first stage has some neat rain effects going on. Really, the first stages is like an NES version of the tanker segment of Metal Gear Solid 2. The music is also really good. Shadow of the Ninja isn’t really a great NES game, but it is a good one. One that could have used a sequel to refine it. There are never enough simultaneous two player games and the chain sickle is unique enough that I wish somebody would have based a whole game around it. It you’ve beaten the Ninja Gaiden games on VC and are hankering for more you could do worse than Shadow of the Ninja, but it isn’t anything really special.