January was a good month of reading for me.  My goal for this year is 50 new books, which means a little over 4 a month and I’m already ahead of pace.

The Master Mind of Mars

After five books, Burroughs Barsoom stuff was starting to feel a bit stale. He had been telling the same basic story over and over. With Master Mind, Burroughs does something completely different. Instead of a straightforward adventure story, this is a combination of that and of social satire. Ulysses Paxton is transported to Mars, just like John Carter was, and ends up helping out Ras Thavas, a mad scientist who is experimenting with brain transplants. The story balances critiques of the anti-religious city-state that Thavas calls home and their rival religious fundamentalist city. Though there is some token mocking of Thavas’ compatriots, it is mostly a take down of the fundamentalists. Though there is plenty of adventure and mad science, the memorable part of the Master Mind of Mars is the satire. It is plenty entertaining. It isn’t a mean critique, but it is an accurate one. While I prefer the first few books for their novelty and sense of adventure, at least this story has its own identity. Good stuff.

The Fighting Man of Mars

This is back to the straight adventure, but with the same energy that the first few books had. It helps that the protagonist is a normal Martian and not the superhero like John Carter. Tad Hadron is just a guy. Plus, there are several twists on the original formula. There is Tavia, a slave girl that Hadron saves who, unlike most of the rest of the female characters in the series, as competent a fighter as most of the men. Then there is the kidnapped girl, Sonoma Tora, who turns out to not be worthy of Hadron’s devotion. In all it is a worthy addition to the series, if not quite as interesting as Master Mind is.

The Eye of the World

This is the third of Justin Scott and Clive Cussler’s Isaac Bell adventures. They take place in the early 20th century, with a focus on then cutting edge technology. Instead of taking place primarily in the west and dealing with train and railroad policing, The Spy is set on the east coast and is features a mystery about a saboteur trying to disrupt the makers of brand new battleship technologies.

These are very much guilty pleasures for me. The setting, in the time of Teddy Roosevelt, is one of my favorite time periods. Isaac Bell is the prototypical hero, perfect if not particularly interesting. This is just a fun book. The supporting cast isn’t quite as vibrant as it was in the previous two books. The villain is good though. He is a bit obvious, as there really isn’t much mystery as to who is behind it. The Spy is a fun little adventure, but nothing remarkable. 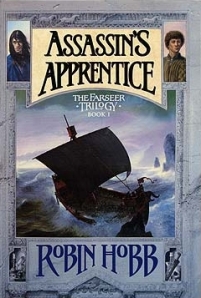 This is the first book in the Assassin’s trilogy, which is the beginning of a series of books taking place inside the same world. This came highly recommended and though I liked it, Assassin’s Apprentice didn’t really blow me away.

The plot follows the early life of young FitzChivalry Farseer, the bastard son of a prince who is trained to be an assassin for the King. It is a very slow building book, leisurely setting introducing all the players in the royal court and Fitz’s other friends. Also, it lays the seeds for a conflict that I assume is going to run through the trilogy. Other than his training, the novel mostly focuses on a growing conflict with pirates who kidnap villages only to return them as lifeless zombies.

That storyline is put off for the next book, while the climax of this one deals with a somewhat rushed plot to usurp the throne. This is one of my complaints with Assassin’s Apprentice. The other problem is some funny POV stuff near the beginning, where the prose shifts from past to present tense for a bit an annoys the crap out of me.

Still, I see why this series has the reputation it does. It didn’t love this particular book, but I did like it quite a bit. If the next two parts of the trilogy can payoff this one’s set up it will make for a wonderful series.

You should like Calvin and Hobbes, this is an essential part of any healthy person’s life. This is a small collection of the comic’s strips, a mere taste of what C&H has to offer, but it does have the added benefit of commentary from Bill Watterson. I find that sometimes with commentary like this it is possible to learn too much about the creator of something, that they are not quite as brilliant as their work would suggest. That is not the case here. Though I do not agree with everything Watterson writes, especially about the effects of merchandising his comic, I definitely respect his opinions. This is a definite must for fans of Calvin and Hobbes.

Another first volume, this one obtained from the Baen Free Library, this is the first part of the Deed of Paksenarrion. Sheepfarmer’s Daughter is somewhat dry, almost like a historical recounting of an actual military campaign. It is a very heavily military and D&D flavored fantasy, one that focuses on the daily lives of low rank soldiers.

Paks is the large daughter of a farmer, who runs away to join a mercenary company rather than marry the man to which her father has betrothed her. This book covers her early training and seasoning, ending with her starting to realize her potential as a paladin. The world is not especially interesting, it is simply a boilerplate fantasy setting. All the stock fantasy trappings are here, with nothing to make is stand out at all. That in itself is not a deal breaker, but there are other problems. Like the flat characters. Other than Paks, nearly everyone else is just one or two character ticks around a name. The only somewhat interesting part is the battles themselves. They are well written, but it is not enough to overcome the tedium of the rest of it.

The Lure of the Mask

This is an old adventure/romance novel that is somewhat light on both adventure and romance. While there is a thread of something truly interesting here, with the mystery of the anonymous singing woman and her masked identity, the plot is too reliant on coincidence. Events happen, but the characters do little to shape or even participate them. And there is a startling lack of payoff. Everything works out because that’s how novel’s end, not because the character’s actions came naturally to this conclusion. There is little reason to revisit this 100 years after it was published, there are better examples of the genre and from the time period. However, I can’t say there wasn’t a kind of inconsequential charm to

2 thoughts on “What I Read in January”