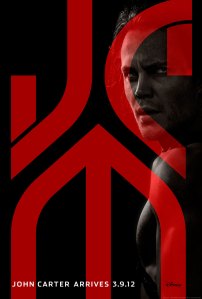 John Carter is almost a new addition into the pantheon of great Sci-fi movies, but ultimately it is too flawed to be considered with the absolute greats, like Empire Strikes Back and Blade Runner. John Carter is still very good and highly entertaining. Based loosely on the first two books of a series by Edgar Rice Burroughs (Tarzan), the tales of John Carter’s adventures on Mars have been delighting people for more than a century. The film version is not without its compromises, including the very title of the film, but it does a great job of conveying the look and feel of Barsoom on the big screen.

To start with, John Carter is definitely a flawed film. The plot often feels rushed, a result of not just fleshing out the events of the somewhat sparse first novel but also weaving in some elements from the second one. This movie is packed with things happening, leaving it little time to breathe or to linger on any of them. The changes to the plot are largely good ones, reading the books I never got the feeling that Burroughs put much thought into what came next so there are places in the books and especially places between books that don’t quite gel. John Carter is in some ways a better telling than the original, but it is certainly not a concise telling. The jumpiness of the plot undercuts any tension or weight much of the narrative could have had, leaving John Carter feeling slightly empty.

However, the character do a lot to make up for the plot’s shortcomings. John Carter is a world weary, sarcastic hero in the vein of Indiana Jones, though nowhere near that entertaining. His eventual love interest Deja Thoris is one of the most legitimately interesting female leads in an action movie. She manages to avoid “strong female character territory,” instead coming off as a true person, albeit one of the strange world that is this films Mars. She is a scientist warrior princess but not out of some contrivance to make her seem as awesome as John Carter, but because as a Princess she was trained to fight and choose to learn. She doesn’t just fall for John Carter, using her expertise to help him, she deceives him and tricks him, trying to convince or force him to help her. John Carter may be the main character, but Deja has goals as well, and is largely smart about pursuing them. The villains are not so fleshed out, Sab Than is just a thug and the other is his manipulator.

The green skinned, four armed Tharks are some of the best uses of CGI characters I’ve ever seen. Possibly it is director Andrew Stanton’s background in animation showing through, but even though they could not pass as real, they do seem alive. The way they move, their facial expressions, the Tharks almost steal the whole movie. Woola, Carter’s alien dog thing, does steal large parts of it. He runs around like a playful cartoon character, zipping along at his master’s heels. Though the CGI in this movie is not the best I have seen, it is probably the most believable. Because it doesn’t ask the viewer to believe these things are actually real, just that they are alive.

That goal is helped by the healthy dose of humor running through the film. John Carter is an outlandish adventure, playing it absolutely straight would be unbearable. So Carter treats his adventure’s with more than a touch of be comical disbelief. The movie is not a comedy, but it doesn’t take itself too seriously. It is very similar in tone to the Star Wars movies. It can be and is serious during the important scenes, but the heaviness of the later scenes is contrasted with the lightness of his early adventures.

In all, John Carter is a good movie. Its not mind blowing, in the 100 years it took John Carter to get to movie screens, much of it was stolen by other films. There is nothing here we have never seen before, but for the most part John Carter is a very well but together collection of now familiar elements. If you like sci-fi, and maybe felt disappointed in the Star Wars prequels, I can’t recommend this enough.

3 thoughts on “John Carter of Mars”