It is time for more Video Game Archaeology! Video Game Archaeology is my monthly exploration of an artifact video game found during my excavations of various bargain bins and yard sales; an examination of a game cast off and long forgotten. This month’s game is Low G Man: The Low Gravity Man, an action game from Kid and Taxan for the NES. 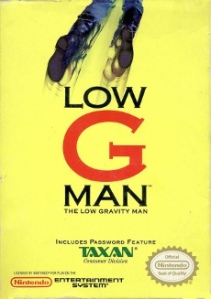 Low G Man was released in 1990 by Taxan. Before playing it for VGA, I was not familiar at all with it. I had heard some people refer to it as a joke, as though Low G Man was a comically awful game, only worth remembering for how badly it failed. Knowing nothing else, I was content to leave my knowledge at that. Then I learned that KID had developed it and it jumped to the top of my list of old games to play. Though they stayed alive into the 2000’s making Japanese visual novels, KID was best known to me as a solid developer of NES action games, specifically the GI Joe games. Since I enjoyed those games so much, I was eager to see more of their oeuvre. While I wasn’t overwhelmed by it, Low G Man wasn’t disappointing either. It was just a kind of good NES game.

Low G Man is a middle of the road NES action game, generally well made but Lacking the polish or spark of a truly great game. There is nothing brokenly wrong with the game, but neither does it do anything to distinguish itself from the multitude of similar games for the system. Low G Man tries, though. The first part of the attempt to give Low G Man an identity is right there in the title. The title character has a “low gravity suit” that allows him to jump incredibly high. As in about 2/3 of the screen to start with, and power ups that increase it significantly. It takes a bit to get used to the height of the jumps, but it works. Except that most of the levels are not designed to incorporate the high jumps. Yes, the player can jump higher than the screen, but there is little reason or incentive to do so. The second distinguishing characteristic of Low G Man is the two part fighting system. The player has two main weapons, a freeze ray and a spear. The ray, which I assume is supposed to be some sort of EMP gun since the enemies are mostly robots, doesn’t actually damage enemies; it merely stops them. The spear is needed to damage enemies. So first the enemy must be frozen, the stabbed to death with the spear. The problem is that the spear and gun share a button, making it easy to accidentally use the wrong one. While it is satisfying to freeze an enemy, then jump on its head to stab it repeatedly, it mostly just grinds the action to a halt. It works for boss battles, but for most of the rest of the game it is tedious and awkward. What keeps Low G Man from being great is that its signature gameplay features are either badly implemented or simply bad ideas. It feels much like the first Mega Man game: all the parts are there for a classic, but it doesn’t quite come together. Unfortunately, there was no Low G Man 2 to sand off all the warts.

Though there was no sequel, this game does share a lot with the GI Joe games, especially the first one, on the NES. Both games have 3 part stages, with occasionally controllable vehicles. The music is similar, and the graphics are almost identical. Really, the graphics are very good. Though too often the background is black, when out in the open you can see the player characters long hair wave as he jumps. Both the GI Joe games and Low G Man feel the same. I am willing to consider GI Joe the polished classic to Low G Man’s rough draft. The only thing that was really dropped was the cumbersome spear fighting. Though the emphasis on jumping high is gone, Snake Eyes still jumps absurdly high.

Low G Man is not a must play. It is just another competent action game in the veritable sea of action games on the NES. For fans of KID’s other NES games, though, it is worth checking out Low G Man. Just remember that it is an NES game, and therefore quite, frustratingly difficult.