Xenoblade, to my knowledge, is the first game to actually follow up on  Final Fantasy XII’s attempts to breath life into the stagnating RPG genre. It may be too little, too late but nevertheless Xenoblade makes an admirable attempt at moving forward.  I am not necessarily referring to the traits from MMOs that both games adopted, though I think the streamlined battle system is used to great effect; I am talking about a shift in focus from the story to the gameplay.  Not by just adding increasing opaque and complex systems, but changing the way the games are actually played. This is not just what I think, this sentiment is echoed by Xenoblade’s director in an Nintendo Power interview.  The story is the usual anime-inspired pap, but the entirety of the gameplay pushes the genre somewhat closer to its western brethren while not losing any of its eastern charm. 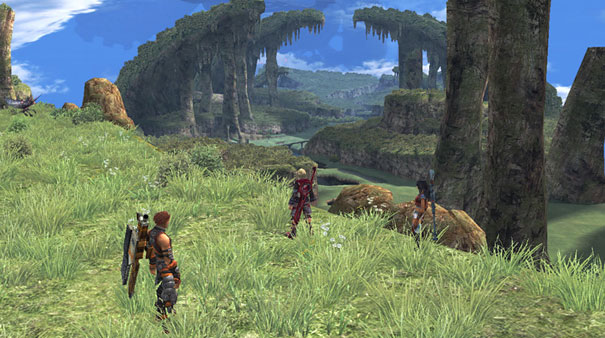 Even if it were a by the numbers, vanilla exercise, Xenoblade Chronicles would be somewhat remarkable.  Sprawling JRPG epics are not so common as they once were.  In the previous two console generations big games like this abounded, but like Bison they are now quite rare. The craving for an epic made it hard to accept the hubbub around Xenoblade’s disappearing reappearing release date.  Was the actually good enough to warrant such attention?  For once, the answer is yes.  Most games get that great reverse sour grapes reputation, that the game we didn’t get was actually really great, but only a few times has this been true.  It was true of Final Fantasy V and of Mother 3.  Fortunately it was also true of Xenoblade Chronicles. 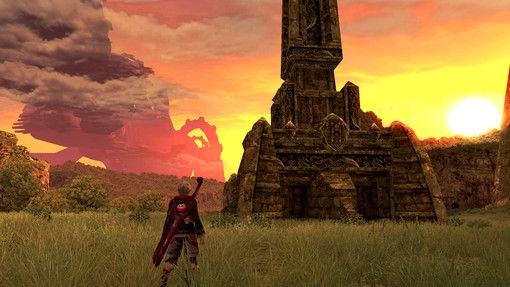 I haven’t actually played it enough to make any lasting judgments.  The first twenty hours are fantastic.  The story isn’t great, but it is more than tolerable.  I’m still not sure how some of the more complex battle mechanics will work, but so far battles are engaging.  Where the game shines, though, is in the scope.  I have played games like Skyrim or Fallout 3, but I still say that Xenoblade has the most impressive landscapes I’ve encountered in a video game.  They are not quite as expansive, though they are far from small, but they a significantly more interesting.  Xenoblade is a serious attempt to create a world, and it succeeds in spades.  The first three open areas: around Colony 9, the Guar Plains and the Satorl Marsh, are all interesting, well populated landscapes.  The grassy hills and cliffs of the plain, occasionally beset by torrential downpours and the moody, foggy marsh are especially entrancing.  I was impressed by the big, empty Sandsea in FFXII years ago, but that has nothing on this.  Even if all other part of the game fall apart before the end, just exploring the world makes Xenoblade worth the price of admission.  Fortunately, so far the rest is pretty good too.