Another light month. I spent a lot of time on Path of Daggers, but the other books I finished this all took some time too. More variety this month than usual, with a collection of newspaper comics and a collection of essays to go along with the usual fantasy fare I read.

This is a digital combination of the first two collections of Thompson’s excellent Cul de Sac newspaper comic. Cul de Sac is about a family, a neurotic son, a bratty daughter and their parents. It reads like a marvelous combination of Peanuts and Calvin and Hobbes. 4 year-old Alice is the star. She is a force of nature, full of wonder for the world and a determination to push her boundaries. Alice steamrolls most of her classmates and is generally a nuisance in the way only a 4 year old can be. Older brother Petey is a weird, closed boy who is also relatable. He may have his quirks, but he also gets the usual older brother joy from picking on his younger sibling and angst from his parents. The parents are just as odd as their children, taking some joy in making things difficult for the kids. The Peanuts like gang from Alice’s preschool are also fun.

This is a fine collection of some excellent comics. There is some enlightening commentary from the artist, but mostly the focus is on the comics themselves. And these are some especially good ones. I really like this comic. 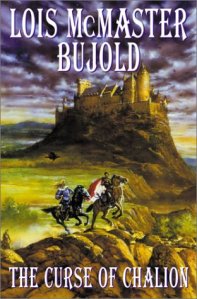 I read this for the first time roughly a year ago, and my review here is still spot on. This is a great fantasy novel, one that stands alone but leaves room for more stories to be told in the same world. It also avoids the world ending escalation of most of the genre. This is one of my absolute favorite novels.

Teenagers from the Future

This is a collection of essays about DC Comics Legion of Superheroes, covering the future superteam from their origins to the present, looking at them from many different angles. As with any collection, some of the essays are better than others, but on the whole this is a good bunch. What I really like is getting serious writing about comic books, something that is somewhat hard to find. Even though the Legion of Superheroes is not one of my favorite, I did love a serious look at their impact and influences. I can’t recommend this to anyone who doesn’t either like the Legion or somewhat scholarly writing, but if you fall into either of those categories, it is worth picking up.