This series hasn’t really turned out liked I had hoped. Not the Zelda series, but my series of blog posts as I attempt to replay them all this year. I am about halfway through Link to the Past and have put some time in on Majora’s Mask, but I haven’t really had the time to sit down and play them that I had wished. It doesn’t help that I have been playing them on my Wii and it is currently unavailable to me. I have managed to play the free download version of 4 Swords on my 3DS, though. I know it really doesn’t come until much later, but I’ve played it and I might as well go over it while it is still fresh.

4 Swords began as a link up extra in the GBA port of Link to the Past. Nintendo was trying to sell connectivity, and 4 Sword was their way of shoehorning it into LttP. The version I played was rereleased as a free download as part of the Legend of Zelda’s 25th Anniversary. Essentially, it is Legend of Zelda: The Arcade Game. It is a mix of traditional Zelda dungeons with some Gauntlet like sensibilities.

Gone from 4 Swords are all of the series overworld and story parts. It is just dungeons. There is also no gradual accumulation of tools; you have a maximum of two at any given time. The emphasis is on getting the best use out of limited tools and on cooperation. 4 Swords is ideally a multiplayer game. I, unfortunately, was unable to play it that way. It is playable in single player, with one person alternating control over two Links. It is actually a lot of fun. The dungeons aren’t particularly complex, they are randomly generated, but there are some novel cooperation puzzles. The arcade game comparison comes in with 4 Swords goal of collecting Rupees. The player is scored on how many Rupees they collect. In multiplayer this adds a touch of competition, with each player trying to get the most Rupees, but in single player it just makes collecting the Rupees more important than usual. 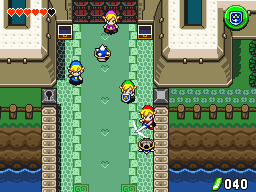 It is certainly not the full Zelda experience, but there is certainly a lot to love. While the initial dungeons fall into the usual Fire/Forest/Ice variety, the bonus dungeons are neat. They are done in the style of previous Zelda games. One looks like LttP, another Link’s Awakening and the last looks like the original Legend of Zelda. It is really cool. This is a fun distraction rather than a full game. Definitely not an essential experience, but a worthy addition to the Zelda series.