I have been out of the blockbuster video game loop for a while now. For this whole generation, actually. This wasn’t entirely by choice, but I haven’t felt like I’ve been missing out. I’ve been more than happy with the games I’ve been playing. I choose the Wii 5 years ago and have had little cause to regret that choice. While I have had access to a PS3 for a couple years now, but I still haven’t really scratched the games available on it. Plus, the preponderance of shooters has left me with less to catch up on than I expected. (My position of shooters is that I don’t like them very much, so I don’t play them.) However, a couple of months ago, flush with dropping 400 bones on a WiiU and eager to have things to play on it, I decided to tip my toe back in the blockbuster pool with Assassin’s Creed 3. If this is the sort of experience I have been missing while playing my Wii and DS, I think I’ll stick with what I’ve been playing. 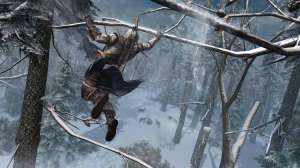 Assassin’s Creed 3 is not that bad of a game, but it is severely flawed. The frustrating thing about it is that parts of the game a nearly excellent, but the broken and stupid parts really drag the whole experience down. To start with, and this is a problem I’ve found to be prevalent on HD consoles, this game is buggy as shit. I really don’t understand how a game that crashes this often made it on to the shelves. The gameplay framework that ACIII is built on is very good. Running across rooftops in Boston and New York and through the trees on the frontier is a blast. And through the combat can get tedious, it works well. The problem is that the majority of the story sequences focus on bullshit minigames and stealth crap like eavesdropping . Assassin’s Creed III falters because its story sequences are just no damn fun to play.

The story itself is not much better. The setting is great and underused. There are tons of points in history with plenty of gameplay to mine, and the Revolutionary War/Colonial America is near the top of the list. In their desire to get most bang for the historical buck, the completely fumbled the story that holds it all together. Sure, you get to hang out with George Washington and Sam Adams, but don’t expect anything coherent in the development of Conner, Haytham and Achilles. Since I haven’t played any of the other Assassin’s Creed games, I won’t comment on the Desmond sections except to say that what is there is nowhere close to a complete story. Connor’s story jumps from scene to scene with only the slightest bit of continuity. Characters change opinions and motivations with no warning or reason and the game forces actions on the player that make no sense. Really, the story is a complete mess.

If I disliked so much about AC3, why did I play it for more than 20 hours? Because removed from the story sequences, the game is a lot of fun. The assassin recruitment missions are fun, as is picking up a group of fellow assassins. Too bad they are almost completely optional and have little to do outside of recruitment. Exploring is great fun; I found nearly all of the trinkets. There is also significant side-quest about building a community on the frontier. While I wish it was more fleshed out, the stories of those townsfolk make more sense than the main story.

At its best, Assassin’s Creed III is a nearly great game. Unfortunately, anything good is equaled by broken, stupid and frustrating bad parts. It is a flawed experience that is just barely worth the player’s time.