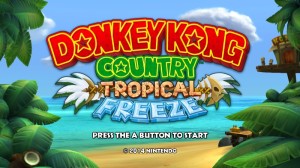 It’s no secret that the 2D platformer has had quite the resurgence over the last half decade or so. Between indie games and download titles, 2 and 2.5D platformers are fairly common. As it has been since they basically created the genre with Super Mario Bros, Nintendo is still the master of the form. Their various Mario, Yoshi and Kirby games are generally excellent. 2010’s Donkey Kong Country Returns continued that trend. It had a few problems, like some terrible boss battles and way too many Rocket Barrel and Mine cart stages, but it was otherwise very good. Donkey Kong Country Tropical Freeze, the latest from Retro Studios, stands among the best ever released by Nintendo. 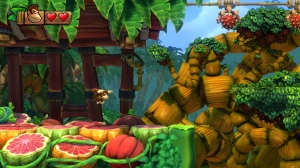 Tropical Freeze doesn’t reinvent the genre. It stays firmly within the usual mold. It plays almost identically to Returns. The fact that is doesn’t do anything new is not much of a fault. What it lacks in innovation it more than makes up for in polish and general high quality. There is something to be said for the complete mastery of the form that is on display here.

The game is just smooth. DK runs with a kind of loping gait that takes a little bit to get used to, but it then becomes natural. He also has a decent little move pool. DK can bounce off enemies’ heads for a high jump, pound the ground to stun enemies and roll through enemies. He can also pick up and throw certain stunned enemies and barrels. It is a simple set up, but varied enough to be interesting. It doesn’t take long to learn to use these skills, but the game requires the player master them. It starts with some relatively easy warm up levels, but the game soon shows its teeth. Unlike many games, it doesn’t care if the player can beat it. Its challenges are what they are and uncompromising. Few games feel so good to play. DK moves smoothly, but there is a weight to him. He moves like the big gorilla he is. He is surprisingly nimble, but his momentum can be hard to shift. It will likely mean some deaths due to mistimed jumps, but when the timing is right it is sheer acrobatic platforming perfection. The way DK moves is distinctive. It is different from any other platforming protagonist, but it works perfectly. 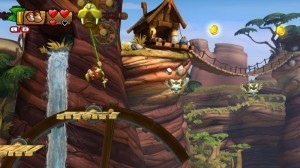 While the challenges are uncompromising, the game does provide some help. Aside from a small collection of helpful items to buy from Funky’s shop, DK now has three possible piggyback buddies rather than just Diddy Kong. Diddy is still there, with a jetpack that provides a significant vertical boost to DK’s jumps. Then there is Dixie, who uses her propeller ponytail to give DK what is essentially a double jump. Last is Cranky, who uses his can like a pogo-stick, a la Scrooge McDuck. None of what they add is terribly original, but they all work so well it doesn’t matter. It makes for some hard choices. Do you go for Cranky and his superior ability to deal with enemies and avoid spikes or Dixie or Diddy and their increased mobility? None of the characters are strictly better than the others. Much like Mario’s power ups, the once needed changes based on the situation. Also, taking two hits causes you to lose your buddy; many of the games secrets are dependent on keeping one of them around.

Some of the flaws of the first game return. Specifically, the rocket barrel. Now, though, DK can take two hits rather than one, making what was infuriating tolerable. And maybe it’s just due to them being easier, but the spectacle seems cranked up. There aren’t any simple mine cart or barrel stages. Instead DK is escaping runaway buzz saws in a sawmill or dodging giant eels. While they may not touch the regular stages as far as gameplay is concerned, they are certainly memorable events. 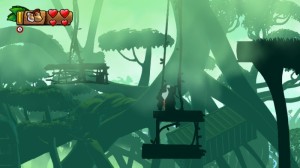 Really, spectacle is what this game does best. While the gameplay side is just excellent executed, traditional stuff, the art, sound and level themes really set this game apart. One level takes place in what appears to come from the Lion King stage production. The silhouette stages return, including one that has DK jumping across moving platforms above an avalanche. Another level is an underwater escape from a giant octopus. Many of the hazards only appear in one stage. The graphics are pretty much perfect. Colorful, well designed and wonderfully expressive. They are just great. Best of all is the return of Dave Wise on the soundtrack. It is wonderful. Just go listen to some of it.

While it doesn’t do much new, Donkey Kong Country Tropical Freeze does everything well. Innovation and experimentation are often things to be lauded in games. But it is hard to say anything bad about a familiar game executed as well as this one. Retro Studios now has three definite classics on their resume: this, DKCR and Metroid Prime. I hope their next game is something original, though I wouldn’t be disappointed in a third Donkey Kong. They have changed Donkey Kong, in my mind, from the character with the good fortune to star in Nintendo’s first hit to a genuine star. After these last two games he is definitely on the same level as any Nintendo character, save Mario and Link. 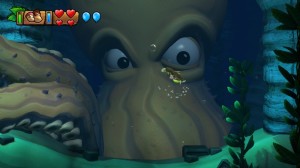 One thought on “This is Donkey Kong Country”