There really aren’t any games that play like Valkyria Chronicles, other than the pale shadows that are its sequels. (to be fair, I’ve only played the first sequel) It is unique. However, it is also quite polished.  This game plays exactly how it was intended to play.  The combination of originality, quality and polish is difficult to find.  I would be hard pressed to name more than a handful like it.  Last years The Wonderful 101 springs to mind, a strange and excellent game that got summarily ignored by the gaming populace.  Also Actraiser, a platformer/sim game for the SNES.  It is a game I’ve heard described as “depressingly unique.”  There are maybe a few others that fit the mold of unique classics.  Not that there is anything wrong with being merely a great game in an established genre, no one is likely to forget Super Mario World or Final Fantasy VII or Halo 2.  But there is just something all the more special about game “like” Valkyria Chronicles.

What I loved most about Valkyria Chronicles was that despite being a largely new experience, it greatly reminded me of playing games as a kid.  Back then, all games were new experiences for me.  I would play for five or six hour stretches, completely absorbed in the game world.  I can’t do that nowadays.  For one thing, as an adult I simply do not have the time to sit and play video games for hours on end.  I sneak my gaming in in spare minutes between work and other responsibilities.  Also, I rarely feel the inclination to play for that long of a stretch.  While I undeniably get plenty of enjoyment out of video games, there isn’t the wonder and newness that I used to experience.  It is understandable, I am both older and have played many, many games now.  With Valkyria Chronicles, I did want to binge, to glue myself to my comfy chair and just play.  I felt like a kid on summer vacation, bunkered down in my friends game room as we played Final Fantasy 3.  The game that can inspire that sort of wonder in me has become increasingly rare.

Valkyria Chronicles has a couple of things going for it that helped inspire that feeling.  The first is its varied strategic combat.  While there are suggested and obviously optimal strategies, the game allows the players to choose their strategy for themselves. The player can customize their roster of units, choosing exactly how to balance the games six classes among the twenty or so slots in their squad. Then, the player gets to choose which ones to actually send out into battle.  Do you go heavy on the highly mobile scouts?  Leave an empty slot for mid-battle reinforcements.  My strategy usually had me dropping out a couple of snipers who would empty their clips and clear a path for the rest of my units before being replaced by the highly dangerous shocktroopers.

Another thing it has going for it is the look.  The graphics are solid, if unspectacular for the PS3, but everything is covered in a scratchy, watercolor filter that, along with some comic book sound effects, gives the game an appealing and unique look.  It also has one of the most mature stories in any game.  Mature in the sense of it actual definition, not in the sense that it has tits and blood in it.  There are moments of sophomoric anime hijinks, but by and large Valkyria Chronicles deals well with themes like racism and the horrors of war.  The main characters are nuanced and flawed.  Rosie is fiercely loyal and brave, but she also has a lot of misplaced hatred.  Even the wart starting villain is shown to be in many ways honorable and unprejudiced.  Unlike many in both the Gallian and Imperial Armies, he is more willing to look at a person’s skill than their birth.  That doesn’t make him not a bad guy, only a human bad guy with both faults and strengths. 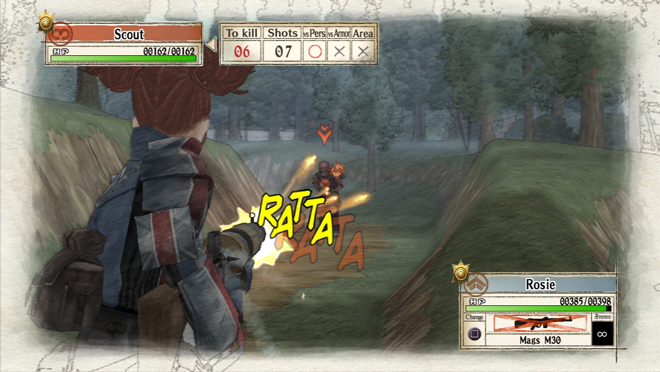 Really, Valkyria Chronicles is just a great game. Its combination of uniqueness and quality make it one of the games that is long going to be one that cements the reputation of its system. When people look back on the PS3 and wonder what it had that made people love it, Valkyria Chronicles will be near the top of the list. An all-time classic.