I’m an old hand at the Etrian Odyssey series, having been on board since the first entry. So the purist in me rebelled at the idea of Etrian Odyssey Untold: The Millennium Girl, with it’s preset party and a more detailed story. A large part of my enjoyment of the series came from choosing my own party and building their skills. It was the same kind of enjoyment that people get out of games like Diablo, but with a party of five instead of just one character. It is easy to build one powerful character, it takes a more measured approach to build an effective party. Despite these misgivings, and the confirmation of Classic mode, I was on board for the game. Unfortunately, I had just finished EOIV when Untold came out, so I let it sit on my shelf for a few months while I wound down from the previous game.

The set party was a new challenge for the series. I didn’t like it. There is no flexibility to the party. While you can only take out five in a group, I usually fill my guild with more like eight. Some are there strictly for gathering. The rest are there to give my team some adaptability. If the enemies are weak to elemental attacks, then I can be sure to include an Alchemist. If they are not, his back row spot can go to a Survivalist. I normally favor an offensive set up, with three fast but lightly armored attackers in the front row. The Story team does not give the player that option. You have a Protector and a Medic, there are no options about this. Instead of being able to adjust your team to fit the challenges, in Story Mode you must figure out how to use your team to surpass them. It can be frustrating, but it is not a bad challenge. It is just different from how I usually approach the series.

They do have a system for adjusting your team set up, Grimoire stones. They give the character who equips them a few points in skills that their class normally couldn’t learn or even enemy skills. It replaces the sublclassing system, where each character could pick a secondary class and gain access to several of another class’s skills. In theory, the Grimoires are fine, but the system just doesn’t work. Gaining the stones is random. Fusing them is confusing and even when understood not that useful. You combine three stones, transferring skills from the second one on to the first, while gaining the weapon proficiency of the third. While I am sure with enough time and effort a player could craft some ridiculously good stones, the process is tedious. Plus, since gaining the stones is random, there is not guarantee that you’ll actually get any worth fusing. 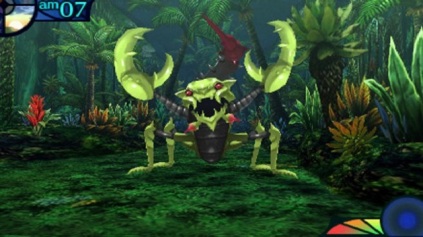 As for the story, I liked it. It does spoil the big reveal in the first few minutes, but once you accept that it is not going to be a big reveal in this game it is okay. While they don’t quite escape the generic quality that often hampers JRPGs, that feeling that they are less characters than conglomerations of traits, they never cross that line into annoying. I don’t get the decision to make the Highlander a silent protagonist, but Frederica is good character. Her earnestness is appealing, as is her struggle with adapting to a world 1000 years different from the one she knew. The big winners are the townsfolk, who instead of just faces to provide services get characters of their own. Having a party around to react to events in the game and the like really helps to flesh out the world. Honestly, what is here is not much further along than the story stuff that was already present in EOIV. The strengthened central narrative does break the no nonsense mode that the original game had, but never egregiously. Plus, there is still classic mode, which plays just like the rest of the series. It is there for players, like me, who prefer that experience.

This game almost feels like a dry run for the upcoming Persona Q: Shadows of the Labyrinth. If that game is anything like Persona 3 or 4, then the story will be significant. Here is a test game with a greater focus on story than the previous games in this series. I have come around from my initial misgivings, though. While I wasn’t a huge fan of some the system changes or the set party, I did end up enjoying the story. As long as it is merely an option alongside a Classic Mode, I don’t mind if this mode is included in a possible Etrian Odyssey V or even an Etrian Odyssey 2 Untold.