Kirby games tend to come in two flavors: weird experimental things like Mass Attack or Epic Yarn and rock solid platformers like Super Star or Return to Dreamland.  Both are indispensable to the pink puff ball.  I love the Kirby series because it has games like Kirby’s Adventure as well as games like Kirby’s Canvas Curse.  Triple Deluxe definitely falls into the regular platformer category.  In fact, it stands as one of the most impressive outings for the “normal” Kirby, with both outstanding level design and a deep roster of power-ups. 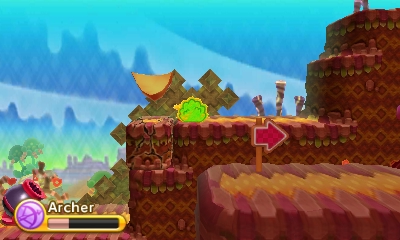 Let’s get one thing out of the way up front, Kirby Triple Deluxe is easy.  It is a Kirby game, they are all easy.  I wouldn’t want a Kirby game that wasn’t easy.  Outside of setting limitations on yourself, like playing without power-ups, this game is not going to challenge any sort of experienced player.  If you are coming into this game looking for challenge, I recommend you both look elsewhere and reevaluate the life decisions that led you to this moment.

On to more important topics, Triple Deluxe has some excellent level design.  A lot of the game, making some of the best use of the 3Ds’s 3D capabilities in along time, takes place on two planes.  There is the foreground, generally where Kirby starts, with the usual linear 2D action.  Then there is anther background plane.  By using special stars Kirby can jump back and forth.  Enemies can do the same.  Cannons shoot from the back screen to the front.  Most of the puzzles are about how to get a certain power from the front to the back or vise versa.  There are also a handful of levels that cover much of the path and force the player to use a mirror in the background to navigate. 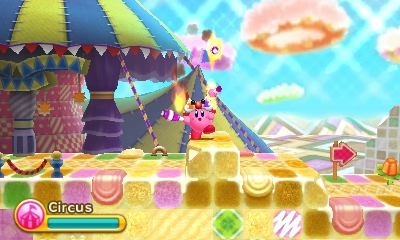 It is never hard to reach the end of a level, but it can be take some careful examination of your surroundings to get each of the three or four sun stones hidden in each stage.  This is where the game can get truly devious.  You’ll need to find hidden keys and manage to transport them to locks, as well as various destructive items that you’ll need to clear the way.  I especially like the laser bar, that Kirby holds on one plane that stretched to the other.  He must avoid obstacles on his side while using the laser to clear the way on the other.  It is the kind of inventiveness one would expect from a Mario game, though it never gets to the point where it truly requires mastery.

The second thing that makes this game, and this series, so great are the power ups.  Triple Deluxe uses the same, mostly, set of powers as Return to Dreamland.  That means each power-up has multiple uses and skills, making each one a varied tool that does require some mastery to use effectively.  Old favorites like Fighter, Beam and Wing are present, each with a handful of uses.  There are also some new ones, most of which are good enough that I hope they stick around.  Circus is cute, but I found it to be largely useless.  However, Bell is both adorable and useful.  Beetle and Arrow verge on being overpowered, though no more so than Hammer.  Since each power has so many moves an uses, it is largely up to the player which one to use. 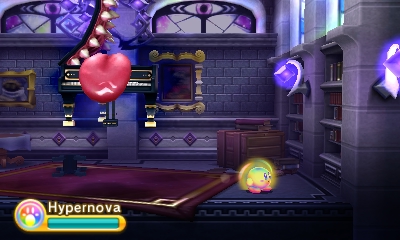 The last new power is Hypernova, which gives Kirby the power to suck up anything. While this is technically a power-up, it has more to do with the level design than with the other powers.  It is required for the levels it appears in, and when its present the game becomes about using Kirby’s sucking power to solve all of his problems.  It is less a powerful tool and more a necessity.  That doesn’t make it not fun.  The Hypernova levels are some of the best in the game.

This is all wrapped in a cuddly package with some of the best graphics on the 3DS.  It is just a short, delightful game.  It oozes charm and personality, and backs that up with some truly excellent gameplay.  There are modes I’ve barely touched, from the 2 Dedede centric modes to the multiplayer arena battle mode.  Like its predecessors Super Star and Return to Dreamland, Kirby Triple Deluxe does so much right that it is hard to hold any of its little faults, length and lack of Hammer power-ups, against it.