Last summer, for about two months I developed an intense infatuation with fighting games. They were all I played. I wrote a couple of blog posts about them, but apparently never managed to get them posted. Maybe I still have them somewhere, outlining my thoughts on about a half dozen different games, from my ineffectual struggles to become competent at King of Fighters XIII to my drunken mastery of Tekken Tag Tournament 2 to my surprising indifference to Street Fighter 4. Also, my thoughts on the surprisingly single player focused Persona 4 Arena.

I like fighting games, but I am no damn good at them. In fact, with a few exceptions I am downright terrible at them. I was quite good at Soul Calibur 2 at one point and with great effort I’ve managed to attain a level of skill at King of Fighters XI and XIII that I’d call “not embarrassing.” Otherwise, though, I am generally very bad. Still, I love the genre. The simple concept mixed with deep mechanics is interesting to me, even if I am unable to master those mechanics. Plus, they tend have some the most colorful characters and absurdly nonsensical stories around. Persona 4 Arena has a colorful story but not a nonsensical one. For a fighting game fan who is inept enough to unable to really play other people, P4A is just about perfect.

Persona 4 Arena is an extremely accessible fighting game. With its auto-combos and mobile characters, it is very easy to play. It verges on being as much as a button masher as Smash Brothers, but its simplistic surface hides a fighting system with significant depth. Again, I am no expert at exploiting those systems, but I can see them. What is amazing to me is how this game was constructed. Nearly all mechanics in this system are adapted from the Persona RPGs battle system. The Persona’s become some sort of Strikers, popping in to deliver special attacks. Status effects abound, with mute sealing off all attacks that use a persona and poison slowly draining a player’s life bar. On top of that, it does a great job of letting each character’s personality show through their attacks, from Teddy’s goofiness to Kanji’s formless brutality. The game is easy to pick up and play, but there is enough depth for fans of the genre to sink their teeth into.

The big draw, at least for fans of the Persona series, is the story. The story in P4A is a fine, if inessential, addition and an effective bridge between P3 and P4. It plays out largely like a dungeon in Persona 4. Someone is trapped in the TV world, and the investigation team is drawn in to find them. At the same time, part of the crew from Persona 3 ventures in to the TV, chasing a disturbance, which is obviously the same person that the other crew is after. That person turns out to be a prototype of the same kind of robot as Aigis. With help from the other characters, this new robot, Labrys, manages to face her shadow and overcome her problems. Still, the group doesn’t find out who put Labrys in the TV in the first place, leaving a hook for the sequel that I didn’t expect to ever come, though I have been proved wrong. 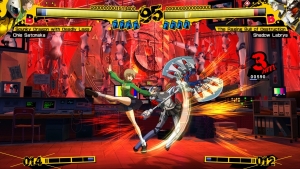 I was surprised that I didn’t hate Labrys. One of the things I liked about Persona 4 in comparison to Persona 3 was that it didn’t have any ridiculous stuff like persona using dogs or shadow fighting robots. Not that I didn’t like Koromaru and Aigis, but their presence kept P3 from having the verisimilitude that P4 had. When I saw that the first thing P4A did was add a robot to the P4 cast I was a little annoyed. After playing it, though, I found it worked well to bridge the two games. The P4 cast would show up when anybody appeared in the TV, finding a stolen, supposedly failed, prototype gives the P3 cast a reason to come running and join the other cast. Plus, Labrys’ story makes for a fine justification for the fighting nature of the story.

Honestly, it was just good to see the P4 cast again. I was much more attached to them than the P3 cast, plus they were fresher in my mind. I actually bought the friendships between characters like Chie, Yosuke and Yukiko. Other than their relationships with the protagonist, I don’t remember that camaraderie between the P3 characters. Did Aigis ever have a conversation with Akihiko? I don’t remember. While this game’s story is not perfect, I was happy for any excuse to see these characters together again.

As fanservice, P4A is basically perfect. It is a fun, accessible fighting game that exists mostly to provide an excuse to revisit the one of the most enthralling worlds to have ever existed in a JRPG. Shockingly, it also succeeds at being a solid fighting game too. It’s story mode it absurdly wordy, but it gives the fans what they want. I am eager to play the sequel, though I am unlikely to drop sixty bones on it.

One thought on “I’ll Face Myself”