I’ve spent a lot of time recently playing a couple of Mario sports games, Mario Golf Toadstool Tour and Mario Kart 8. Both are excellent, but I don’t have much of a review for either of them. It is Mario Kart and a Golf game, they are what they are. Still, both are excellent entries in their respective series and prove that whatever trouble they might be having, Nintendo routinely puts put some of the best software in the world.

Mario Golf is probably the harder one for me to evaluate, since I am significantly less familiar with what came before it. I played some of the N64 game back in the day, but I haven’t played it lately and I don’t remember much. I did play a ton of Hot Shots Golf, which unless I’m mistaken is also made by Camelot, the developers of the Mario Golf Series. The golf mechanics here are simple and fun. It is just a three tap swing. The first starts the back swing, the second determines power and the last is for accuracy. There are a lot of little tricks for backspin or forespin and the like. Even for someone who has little love for the Mushroom Kingdom, this is a solid game. 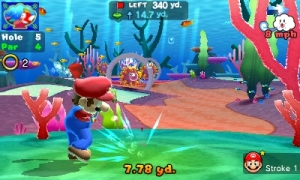 There are some awkward parts. The content of the game is split between Castle Club mode and Free Play mode. I don’t really see the reason to split things the way they have. It isn’t strictly a problem, just a slight annoyance to have to go back to the main menu to switch from playing a tournament to go to challenge mode. There is no reason that one of the various Toads filling the Club couldn’t offer the challenges. For some people, the presence of Day 1 DLC is a problem, but I don’t have a problem with it. The game doesn’t feel lacking without it; there is more than enough content on the cart. Three full 18 hole courses and six 9 hole courses. My biggest problem with it is that it doesn’t leverage the Mario cast as well as it could. They are around and full of their usual personality, but the game really encourages the player to play as their Mii. The Mii is the only available character in Castle Club and once the player has unlocked a few items the Mii is easily the best character. Unfortunately, having the Mii be that prominent shoves Mario, Luigi and crew off to the side. 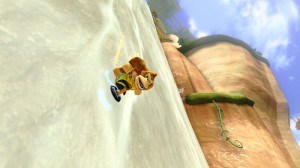 Mario Kart 8, despite also having a Mii option, doesn’t have that problem. The personality of the Mushroom Kingdom inhabitants simply oozes out of the racers and the courses of this game. In Mario Golf, opportunities for the golfers to show their personalities are rather limited; only after a hole and really only one at a time. In MK8, there numerous chances for them to show off. It makes for a very colorful game. Check the Luigi death stare videos for an example. Or the chanting Shy Guys on Shy Guy Mountain. Or the signs on any of the courses. It is a game that bursts with personality.

The racing, as usual, is pretty great as well. I really like a lot of the new courses, and selection of returning favorites is excellent. They added the Koopalings to the roster, but also added a few more babies and lost a few interesting racers, so that is a wash. Many people complained about Mario Kart Wii’s item balance. I never had any more problems with them that I did in any other game in the series, but MK8 has dialed back some of the more obnoxious ones. Blue Shells do seem to be rarer, and POW Blocks are gone. People seem to be really down on MKWii in general. I liked it. More than seeming favorite MK DS, for sure. But MK8 is just better in every way. There’s not a lot to say, it’s Mario Kart.

These games have reminded me that I love the Mushroom Kingdom. I wish that we got to see more of Mario’s side characters in games other than the sports games. I don’t want the main Mario games to become Mario and his crappy friends like Sonic. (Though you could argue that’s just what Super Mario 3D World is and it is excellent) But the RPGs could use more appearances by the likes of Rosalina and Toadette. My personal favorite is Daisy, who has one real game appearance to date. I liked Paper Mario: Sticker Star, but I was very disappointed that all of the supporting characters were generic Toads. Also, RPG characters can’t seem to break into the rest of the games. Does anyone doubt that Fawful would be an excellent addition to the Mario Kart roster?

While there are some entirely valid complaints about diversity in the roster, but I really like the Mario cast. Over the last 30 years, Nintendo has done a great job of creating a cast that all have fairly defined roles but can fit into a wide variety of situations, like Loony Tunes or the Muppets. Not quite on the level of those two, but better than anything else in video games. The best example of this is the evolution of Luigi. He started as just off-color Mario for the second player. With SMB2 he became taller and had a higher, floatier jump. When he starred in Luigi’s Mansion he acquired a hefty dose of cowardice. In Mario & Luigi: Superstar Saga he was constantly forgotten. With each appearance, his character changed a little until we got the version we have now. Luigi’s is Mario’s high-jumping, scaredy cat brother who has a tendency to fade into the background. He’s has become a unique and interesting character. Most of the cast has went through a similar, though less drastic, transformation. I just really like the Mario gang and really enjoy most of Nintendo’s arcade sports titles.

One thought on “The Wild World of Mario Sports”