Both of the people who read my blog regularly will likely recall that I’ve had Pikmin 3 on my “to play” list for about a year. I don’t know why I’ve put it off for so long. At first it was due to a deluge of other games; games like Wind Waker HD and The Wonderful 101. Pikmin 3 was continually pushed down the list. One thing that did keep pushing it down the list is that it is best played with the wiimote and nunchuk, which means that I couldn’t play it on just the Gamepad. That made it just that much easier to skip it and go to something that I didn’t need the main TV for. Now, though, I have finally taken the time to play this game. Pikmin 3 is an amazing game; beautiful, original and with a startling attention to detail. I feel like a fool for putting it off so long. 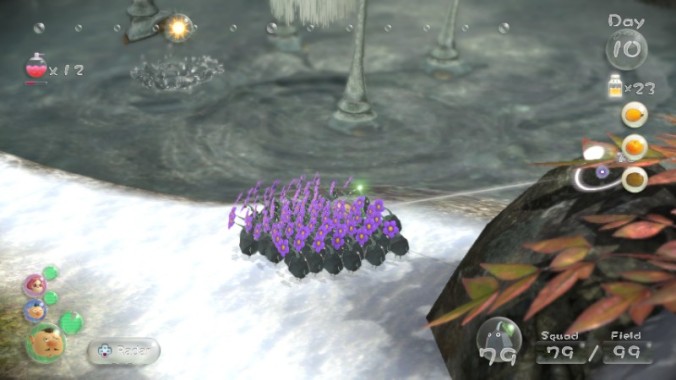 I never played the first two Pikmin games. They came out during the time I was largely not playing video games. I did have a Gamecube, but other than Resident Evil 4 and Smash Bros Melee I didn’t have a whole lot for the machine. The Pikmin games looked good, but I just never happened to stumble upon them. Plus, my experiences with console based RTSes, even ones that were supposedly well made, have never been good. I did pick up the New Play Control Pikmin 2 for the Wii, but my nephew borrowed it and I haven’t seen it since. So Pikmin 3 was my entry into this series.

Pikmin 3 takes a complex genre, real time strategy, and gives a patently Nintendo take on it. It is simplified in some ways, like resource management and unit types. Games like Warcraft and Command and Conquer had various resources that the player had to harvest and then allocate to expand their army. Pikmin 3 does have some resources, but there is little about them to manage. Instead of an extensive tree of unit types to build an army with, there are only a handful of Pikmin types to use. In typical Nintendo fashion, the elements of Pikmin 3 all work together. The main goal of the game, other than to reunite the three little aliens that are the game’s protagonists, is to find fruit. The protagonists convert it to juice and drink, with their mission to the planet they crash on being to find new sources of juice. While there are frequently other goals, that is the primary one. The only other resources besides fruit are flowers and enemy carcasses, both of which are used to create more Pikmin. The color of Pikmin you get from them are determined by the type of Pikmin you used to send them back to the home base.

Solving puzzles and fighting enemies in the game is all based on the color of Pikmin. There are red, yellow and black Pikmin and they have a sort of rock/paper/scissors relationship. The red ones are immune to fire and good at fighting while the yellow are immune to electricity and, while not as good of fighters as the red are lighter and can be thrown farther. Choosing the correct Pikmin for the job is two thirds of the game. It simple in theory but difficult in practice. Especially once you get all three characters together and can split them into three distinct groups. Do you want to split your colors between each commander, or give each commander one color to lead. It hits that perfect balance of easy to play, hard to master.

Pikmin 3 is also one of the best looking games I’ve ever seen. The tiny aliens you control explore an Earth-like world, finding familiar fruits and your discoveries new names. It is cute. The same goes for all of the “alien artifacts” you find over the course of the game. Seeing these little aliens interpret various trinkets in amusing ways it highly entertaining. It all looks good, simultaneously detailed and clean. It is fun to just run around the areas of the game and just look at what there is to find.

It is really just another great game on the WiiU, a system with a robust and varied library despite its reputation for not having any games. Nintendo may be failing to sell the system, but they are not failing to support it with excellent software. It seems likely that Pikmin 3 is the last entry we’ll see in this series, which is a shame based on how great this game it.

One thought on “Pikmin 3”