Possibly the third worst problem with video games, besides the vile adherents to a certain hashtag and the constant shuttering of mid-range developers, is the constant cycle to hype, blacklash and disappearance that games go through. Before they are released, most games are hyped to all hell, even those that have no business generating such excitement. It is expertly manufactured, but false anyway. After their release, games tend to be broke down. Maybe they didn’t live up to that prerelease hype; that certainly happens. Just as often, the tearing down is done by the developers themselves once they start the process of hyping their next game. A couple of years after their release most games then lie forgotten, never entering into current discussions. A select few retain some mind share, the rare few the combination of popular, profitable and good enough to leave their mark on the landscape, are constant used as benchmarks to compare everything else to. It is strange. I can’t think if any books being sold by putting down the ones that came before it. Movies sometimes pride themselves on being bigger and better than the previous one, but usually tacitly selling the notion that the previous film was already very good. Only video games try to show their worth by detailing how their predecessors were crap. It boils down to the video game industry’s focus on the now, or maybe on the near future. No one seems interested in what came before, only in what is coming next.

I am increasingly less concerned with what is coming next, because so little of what gets covered interests me at all. What are the big games expected this fall? The only ones I know of are Legend of Zelda for WiiU and I have an outside hope of seeing Persona 5, both of which I wouldn’t be surprised to see slip into next year. There are other games, yes, but I have yet to see a game that makes me want to drop any amount of money on a PS4 or XBone and it seems more likely every day that there won’t be any. (I’ll want to play FFXV eventually) And every day I am more okay with that. Despite lackluster sales, the WiiU is kicking a whole lot of ass in terms of games. Anything else I could theoretically get on my PC. When nothing being hyped is at all interesting to me it becomes all the easier to just check out. Honestly, this isn’t a new thing for me. I was pretty current for a lot of the PS2 generation, but the most recent generation was too expensive for me to hop on right away. I was still at least somewhat checked in at that point; I actually did want the games coming out. I looked with longing with at pictures of The Last Remnant, Valkyria Chronicles or Metal Gear Solid 4, but satisfied myself with Mario Galaxy and Etrian Odyssey. 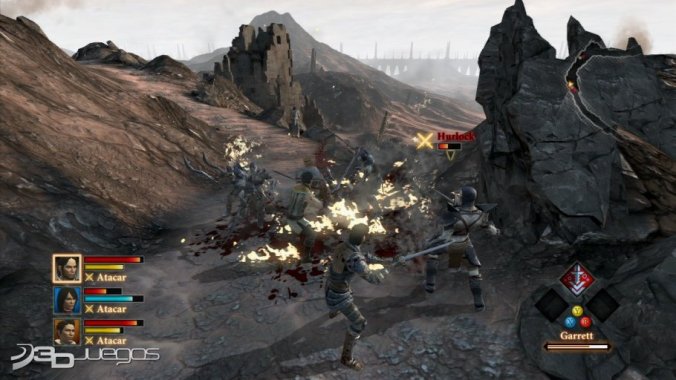 Now that I am playing a lot of PS3 games, I am finding that my experience with them does not match their reputation. Disconnected from the hype that preceded their release, I’m not comparing the game to what was promised before it came out. There is just the game. Did Final Fantasy XIII have a highly trouble development cycle and come out as something of a mess? Yes, yes it did. But playing it years later I wasn’t judging it against what I expected it to be. I find I have a lot better experience with games without expectations.

Recently, I’ve been playing Dragon Age 2. I had planned to take a break from Bioware games after finishing Baldur’s Gate, but when I fired up my PS3, for some reason I couldn’t bring myself to start back with Yakuza 4. Instead, I pulled DA2 off the shelf, actually thinking it was the first but not realizing my brother had taken it. It is certainly a Bioware game. My first thoughts were that games have come a long way aurally and visually since Bladur’s Gate, but they haven’t done much on the gameplay side. Look at how far we’ve stayed. The more I played, the more the game’s specific faults and strengths were apparent.

Dragon Age 2 is a small game. There is no getting around that. It isn’t short; I’m nearing the end and likely nearing thirty hours played. It would take at least one more play through to see the bulk of what the game has to offer. But it is small, just one not especially large town and a handful of repeated dungeons to quest in. It is also a good looking game. That likely has to do with how small it is. The game can look good when it only has to render so much. The game’s biggest problem is that every quest essentially ends the same way. The player can make decisions, but the end result is the same: a fight. Nine times out of ten, no matter what choices you make during a quest you are still going to have to fight the same battle at the end of it. The big conflict in Kirkwall is the tension between the Templars and the Mages. The game is constantly coming back to that conflict and forcing the player to choose a side, but in the short term the choice don’t matter, because the quests tend to play out the same whether you back the Templars or the Mages. Really, the gameplay is mostly just a simplified version of what was found in Baldur’s Gate. There is a clear line from that first game, to Knights of the Old Republic to this. This plays like Baldur’s Gate designed to be played with a controller instead of a keyboard. In practice, it works out like a slightly inferior version of what was found in Final Fantasy XII.

Really, it does a lot of good things on the story telling side, ludonarrative dissonance aside. It sets up a take within a tale, removing the player another step back from the action. You are not necessarily playing the through the events of the game, you are playing though dwarven rascal Varric’s version of what happened. The player makes the choices, but there is another level of separation between the player and the protagonist. It is not the protagonist telling their own story. This is all second hand. Honestly, while there are some foibles, the story is rock solid, one extraordinary individual’s rise from disaster to greatness. Sure, the limpness of The Champion’s family members is a disappointment, but the character the game lets you build and his or her companions are quite good. My character, a female rouge, sided strongly with the Mages, backing her sister at every opportunity. She forged a strong connection with the wayward young elf mage Merrill, especially after her sister was taken to join the circle, fell in love with fellow rogue Isabel and even formed a mutual respect Aveline, the straight-laced guard captain. 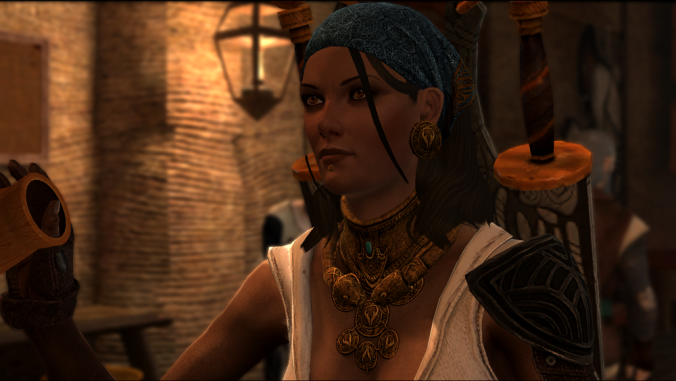 Dragon Age 2 is an interesting game. I was surprised at how much I enjoyed it, because its reputation is that it was something of a mess. It isn’t as epic as other Bioware games, but in place of that epicness the game has an intimacy. This is a small story, and it mostly makes good use of it limited scope.  The only big fly in the ointment there is that movement through the town is not seemless, instead kicking the player back out to a map, making the already small world seem less real. The meta-fictional aspect of it all being Varric’s tale he is telling is really neat in theory, but I don’t think it is used as well as it could be. The game doesn’t make quite enough use of the unreliable narrator. Honestly, I liked the how small the game was, it really kept things focused. It isn’t the bloated mess that many western RPGs turn out to be.  My opinion seems to be opposed to many people who played the game when it was new, when its size was in direct contrast to its more loved predecessor. Removed from prerelease expectation, I have found it to be a fun experience.