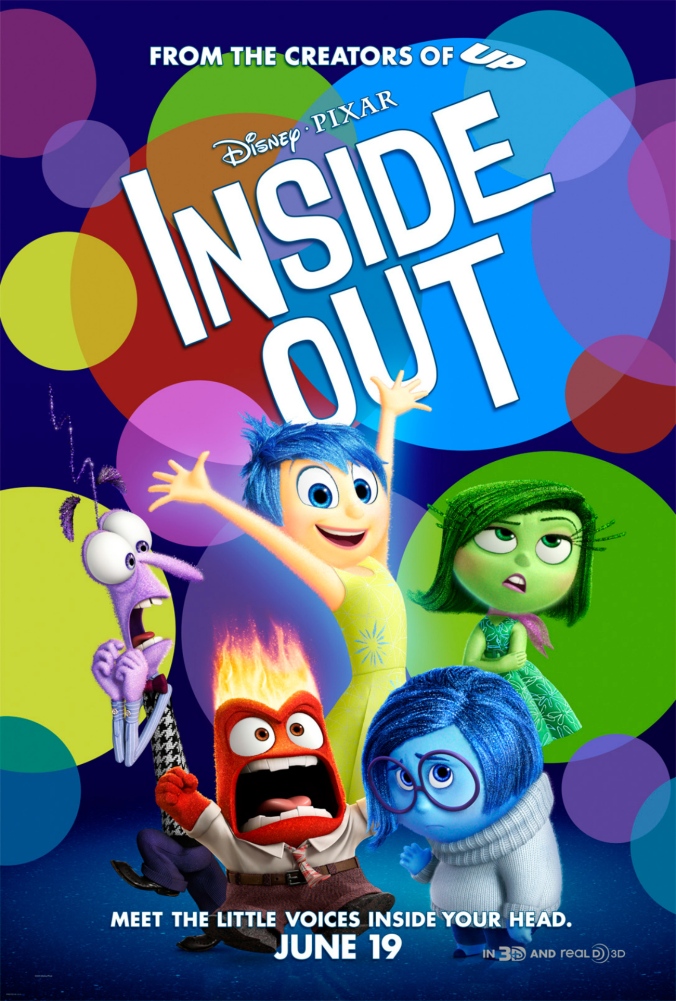 The accepted, though not correct, narrative is that after a nearly unprecedented run of success, Pixar has been flailing a bit with their films lately. I don’t agree with that at all, their previous two films have not been as well received but we just as good as the first ten or so. The one black mark on their resume is Cars 2. The difference now is that Pixar actually has competition putting out good animated films. The Disney ship has been righted over the last few years and Dreamworks has put out a couple of good movies. No matter what you think of Brave or Monsters University, with Inside Out, Pixar is unquestionably on top of its game.

Inside Out is about a young girl, Riley, and the emotions that control her brain. That is the big hook of this movie; it is about a handful of entities representing the different emotions that control this girl and everyone else. Joy takes the lead, making it her, and her companion’s, mission to keep Riley happy. When her family moves from Minnesota to California, her emotions have trouble dealing with it. Joy and Sadness end up removed from the control center. It is really a quite brilliant premise, both amusing and affecting. I don’t know that the metaphor of these emotions quite hold up through all the little details, but it is packed with enough energy that it really doesn’t matter. Inside Out pulls out a very effective twist. It starts as Joy’s quest to get back and make Riley happy again, but it really becomes her journey to realize that Sadness is just as important as Joy to a person’s emotional health.

Like all the best Pixar films, it toes the line between being a children’s movie and a mature film. Because Inside Out is packed with mature themes, in the sense of being actually mature, not in the sense of having nudity and cusses. The human characters don’t do a lot; they are merely learning a new place, but still the end up feeling very human. There is no big action or humor plot, just a girl having a tough time adjusting to a cross country move. That being said, it perfectly nails a truthfully all ages approach to humor. Inside Out evokes many emotions, but it is one of Pixar’s funniest films. Looney Tunes sight gags and clever word play are the order of the day, especially with the emotions left in the control center. Disgust is constantly disaffected by everything, Fear has a terrified manic energy and Anger is a delightful hothead. Possibly the best gag in the movie is the brief look it gives into the emotions of Riley’s mother and father. It isn’t a particularly inspired bit of comedy, but it is undeniably funny.

The true emotional content comes from the adventures of Joy and Sadness, who must trek back from Long Term Memory before Riley’s life goes completely off the rails. The meet up with Riley’s somewhat shady former imaginary friend and try to board the train of thought. There are plenty of amusing bits, but it is here that the various emotional lessons are learned.

Inside Out is terrific. It might not be quite as good as the absolute best of Pixar’s catalogue. I wouldn’t put it above Wall-E, Up or The Incredibles. But it is right there in that next echelon of truly excellent movies. This is one of the best animated movies to come out in the last five years.

2 thoughts on “Inside Out Review”