I read a solid four books in November, my average.  I have already passed my yearly goal of fifty, settling in somewhere in the high sixties.  It has been a good year, even if I don’t do much reading in December.

This is often on lists of best Christie stories and after reading it I would say it deserves it.  It is hard to review a mystery without spoiling it.  Here, Poirot is on a train when someone is killed.  The murderer must be one of the dozen other people on that train car and it is up to him to ferret out just who is responsible. One thing this story does deal with the justification of a murder.  Murder on the Orient Express makes it very clear early on that if someone could deserve to be murdered; it was the victim of this story.  He is truly reprehensible. That gives a clear cut motive for the murder, revenge, but it is up to Poirot to find out who is seeking revenge on this man.  He must also determine whether it is justice to find the killer.  Really, it is easily one of the best of Christie’s that I’ve read so far. It is excellent. 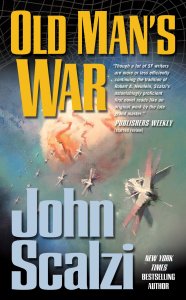 This came highly recommended and it didn’t disappoint. Old Man’s War is a science fiction war story, along similar lines to Starship Troopers and its ilk.  In it, elderly people can sign up with the Colonial Defence Forces to extend their life. John Perry is one such person; Old Man’s War is his account of joining the CDF and his time serving in it.

There is nothing truly new or groundbreaking here, it is just a very well executed rendition of its genre.  Perry first learns to deal with his new body, since the CDF is not sending the elderly out to fight aliens, and his new neural implant that allows him to communicate with this squad mates.  He makes some friends in boot camp, the get sent separate ways, some of them die.  There are various alien races to fight with, notably the Rraey who like to eat people and the mysterious Ghost Brigade, who are sent on the most dangerous missions.

It ends up feeling a little insubstantial.  It spends a lot of time introducing characters in boot camp who then all but disappear and it becomes all about the battle and aliens.  Still, what is here is very enjoyable.  Its greatest sin is leaving the reader wanting more, which isn’t much of a sin at all.

I wanted to like this a whole lot more than I did.  It has some compelling characters and a decent mystery.  It just feels very labored in telling the story.  Characters do things that they would clearly not be inclined to do. They keep talking with Bess Crawford, the detective, even though they have no Earthly reason to do so. While it is necessary for the story, the book fails to justify its central character’s place in the proceedings.  Her motives are clear, and she follows through, but nearly everyone else does things just so the plot keeps moving along.  It is really noticeable at only a few points, but once I started seeing it, it really stuck out. Still, it wasn’t an unenjoyable book, but for all that the setting and central characters grabbed me, the rest of the book just wasn’t strong.

LeCarre is a master of keeping the reader from knowing exactly what is going on.  Each scene is clear, but there is clearly information that all of the characters have but the reader doesn’t.  It makes for a disorienting read. It not being clear doesn’t stop it from being compelling.  Still, it is nice to read a spy book that is not about Bond like action, but instead about ferreting out information to solve the mystery.  There is a mole at the top of the British Spy organization, and George Smiley, who was forcibly retired in a takeover, comes out of retirement to find out who it is.  Outside of knowing that, there is little that the reader does know.  Information, both relevant and not, is doled out in small doses as Smiley and his compatriots get to the bottom of things. Smiley is singularly unexciting spy, being an old man that only talks to people, but his is still a rich character.

I picked these up in a recent comixology sale of Grant Morrison comics a month or so back.  I had read them when they first came out, but hadn’t really touched them since.  It is a great series, but it might be the weak link in Morrison’s epic Batman run.  Being sandwiched in between Batman RIP (and Final Crisis) and Batman Inc is some tough luck. Still, these are some excellent comics, though the rotating art team makes the quality pretty variable.  Nowhere is that more evident than in the first collection, which goes from a story with Frank Quitely on art, which is wonderful, to Philip Tan stuff that is nigh unreadable.  It is by far the worst in any of the three volumes, but the variable quality of the art pervades the series.  The story, though, is solid all the way through.  It has Dick Grayson taking over as Batman in Bruce’s absence and Damian takes over as his Robin.  It has great character work for both Dick and Damian, as well as a ton of fun Joker moments. The best part may be the way this team reverses the usual Batman & Robin dynamic, with Damian playing bad cop to Dick’s good cop.  It is just a great series.

The other purchase I made in that same sale. The first story in this series is one of the best Justice League stories of all time and the second is also good. This collection shouldn’t take much to sell it.  It is the big seven JL fighting bad guys that are worthy of bringing seven of the most powerful heroes into the world to combat them.  It doesn’t do a lot with the interpersonal side of superhero stories and is instead just the biggest action scenes possible.  Morrison really makes things work and Howard Porter is fine. Seeing the Justice League fight doppelgangers designed to beat them is a ton of fun and it is followed up by having them fight an army of renegade angels.  This book is simply amazing.