For as big a fan as I am of Mike Tyson’s Punch-Out!!, it was kind of shocking to me to find out that there was a sequel on SNES.  This was in 2008, about the same time as Nintendo announced the Wii game.  Somehow, the existence of the SNES game eluded me for nearly 15 years.  I really don’t know how I didn’t know about it. I did buy it on the Virtual Console, but I never got around to playing it.

After beating it, I have to say that I don’t like it as much as the other two Punch-Out!! games I’ve played. A big part of that is how familiar I am with the NES game and how closely the Wii game sticks to it.  Super Punch-Out!! is quite a bit different. It is more complex, with a wider variety of punches and dodges available to the player, and it has a roster of opponents that is mostly unique to this game. (and the arcade games that no one has ever played) I think what really hurt my enjoyment of it, though, is that I don’t really remember how long it took me to get good at Punch-Out!! 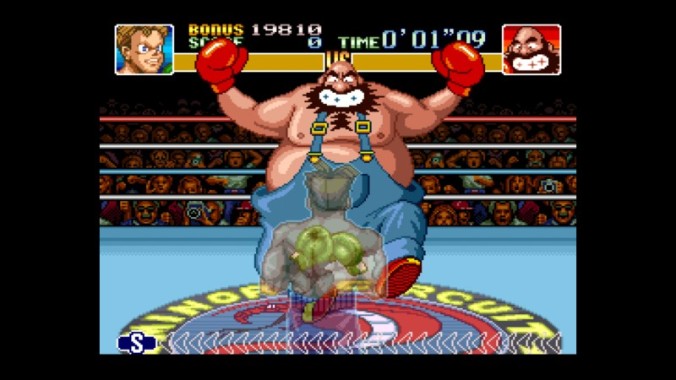 I found playing Super Punch-Out!! very frustrating.  After the first few easy opponents, I started ran into the wall that is learning new fighters.  I got by Piston Hurricane and Bald Bull pretty easily, but Dragon Chan and Masked Muscle was where I started having a lot of trouble.  These fighters have a lot of different moves and tics, and learning those takes time.  Especially when the game doesn’t quite work like I expect it to.  The real problem is how fast I was trying to beat this game.  Now I think of NES Punch-Out!! as a pleasant romp, at least until the last three or four fights.  But it took me a long time playing that game to get that good.  Like playing it off and on for more than 20 years. Compared to that, or to a game that is deliberately as close to that game as possible.  Super Punch-Out!! is trying to push the series forward, and it mostly works, but it frustrates an old pro at the NES game.

None of those problems really have anything to do with what this game actually is.  Although I don’t much like this game, I can’t really claim that it isn’t a good, or maybe even great, game.  The complexity it adds should be counted as a good thing.  I really liked the different super punches that Little Mac has at his disposal.  I never really figured out how the different punches worked, but the options are good.  It will take time to learn when to use which one might take some time, but I like having a more options than just uppercut. 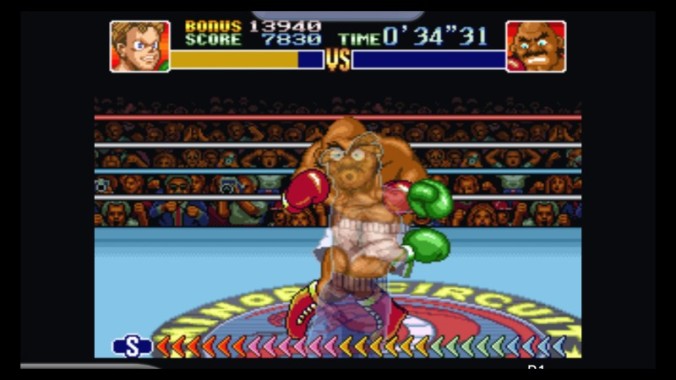 I’m of two minds about the new boxers in this game.  I really like some them; they work.  What I don’t like is how far they start to get away from being, you know, boxers.  Masked Muscle is fine; his luchador shtick doesn’t interfere with him being a boxer.  His one extra move is to spit in the player’s eyes, an illegal move but not a crazy one.  Likewise with Heike Kagero and his hair whip.  But Dragon Chan and his kicks or How Quarlow and his stick are just a step too far for me.

Super Punch-Out!! is a great looking game.  No one can argue with that. Just like the original was one of the best looking games on the NES, this one has some of the best looking sprites on the SNES. The music is also a highlight.  Really, there is no part of this game that isn’t well made; I just don’t like it as much as the previous game. Nintendo rarely misses and they were really on the top of their game in the SNES days.  While Super Punch-Out!! doesn’t quite have the reputation of some their best games, like Super Metroid or Yoshi’s Island, but it really shows how the mastered this hardware.