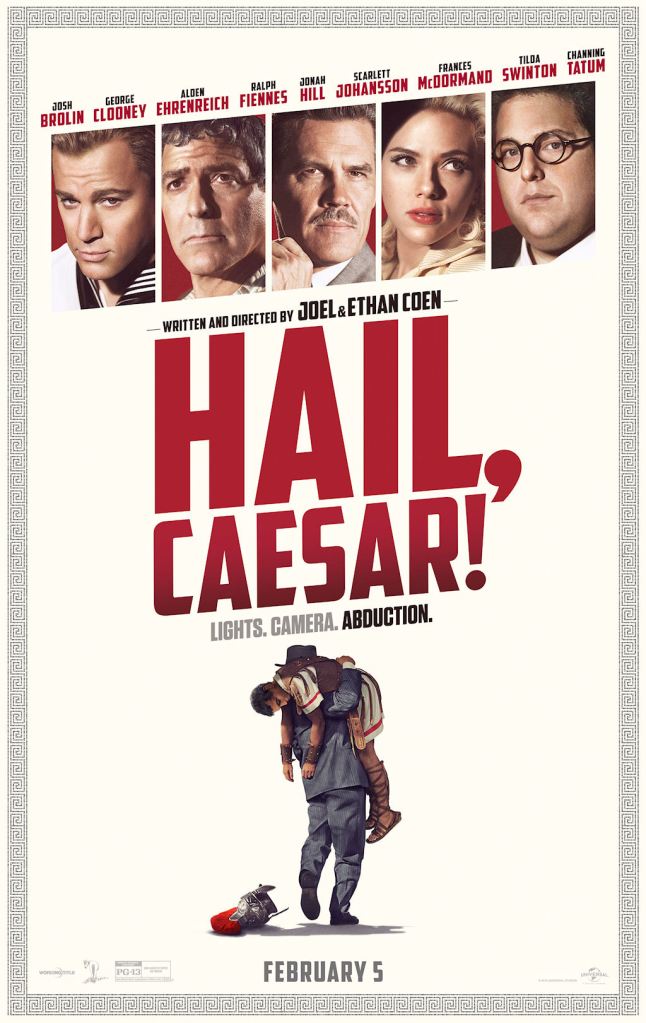 The Coen Brothers’ movies tend to share a certain nihilism. Even in the comedies tend to be rather bleak affairs. Hail, Caesar! might be the brightest, sunniest affair they have ever produced, but in the end it still shares that nihilism. The characters in this film do not face as dire of consequences as the characters in many of the Coen’s movies, but their efforts still produce the same results. In the end, nothing the characters do matters.

Hail, Caesar! lets the Coen’s riff on all varieties of classic cinema. It stars Josh Brolin as Eddie Mannix, a fictional version of a real person, who works a fixer for Capitol Pictures. The movie follows him for roughly a day as he tries to keep the production going of all the movies in production for the studio. Their big picture is a bloated biblical epic also title Hail, Caesar. The star of that movie, played by George Clooney, is kidnapped by communists calling themselves the Future. While Eddie tries to keep his stars disappearance under wraps, he also has to deal with emergencies with other films. There is an aquatic musical which has to deal with the fact that its star, the wholesome imaged Scarlett Johansen, is pregnant out of wedlock. There is a dinner party drama where the singing cowboy star is having trouble adapting to a new role. He’s also got a pair of twin reporters, played by Tilda Swinton, snooping around. And he’s got a job offer in another industry.

Most of this just exists to let the filmmakers toy with some kinds of movies that they could never actually make. While there is a strong central thread that ties it all together, most of these bits exist in their own little universes. Cameos and bit parts abound. It is fun to see Hobie Doyle, former rodeo stuntman, try to play an aristocrat. It is just as fun to watch him do lasso tricks are inappropriate times and play a singing cowboy.

Unlike most other Coen films, there isn’t much darkness here. There is a ransom, but kidnap victim never seems to be in much danger. The biggest danger to most is that their shameful secrets will get out. The villains are more intellectual and ineffectual than actually dangerous. But ever with its fairly low stakes premise, it still holds that essential nihilism. No matter what anyone does, nothing changes. This is the best case scenario in the Coens film: everything goes back to the way it was. Really, for all intents and purposes the good guys win, but if it can even be called a victory it is a hollow one.

This is not a weighty film, though; it is just a comedy that is not stupid. It is funny. Hail, Caesar! will have attentive viewers in stitches for most of its run time. Sometimes it is just for the absurdity of the situation; sometimes it is because characters have funny accents. So many actors give great performances, so many little jokes and bits land, it really leaves you wanting more. By the time it circles back around to where it started I was ready to take the ride again.