It has been a while, but I’m back with another game from my bread and butter genre: the side-scrolling platformer. Magical Quest starring Mickey Mouse is the first of three Mickey Mouse SNES games from Capcom. The overwhelming quality of the Capcom’s NES games made me eager to try out some of their SNES output. Magical Quest, while largely enjoyable, does not quite live up to that pedigree. 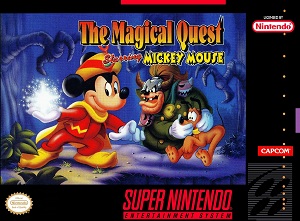 In Magical Quest you play as Mickey Mouse, on a quest to rescue his dog Pluto from the villainous Pete. Along the way he gets some outfits that give him different powers, like a Wizard’s costume that lets him shoot magical bolts or a fireman’s costume that gives him a hose. It looks good and plays good, but it feels somewhat lacking. A lot of that is due to the fact that game can be beaten pretty easily in an hour and a half. Magical Quest has six levels split into four stages each, none of which are particularly long. The only part of the game that does feel long are the bosses, all of which take about 4 hits more than would feel natural to beat. It is not that the bosses are particularly hard but that they are tedious because you have to repeat the pattern so many times. 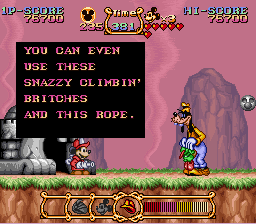 The outfits are a great conceit for expanding and limiting Mickey’s powers. The problem with them is that the game doesn’t do enough with them. The game is more than halfway over before you get your full array of powers and it doesn’t really build on them in any real ways. It gives the player the abilities to do some things, but it doesn’t ever require the player do them. Sometimes you need to be a magician to shoot magic, sometimes you need to spray things with water, and sometimes you need the last outfit’s grappling hook. Rarely, almost never, do you need to use them in any sort of conjunction with each other. There are grappling levels and fire levels, but no levels with some grappling and some fire. It ends up feeling like the first half of a game. Unlike something like Mario, Magical Quest never really builds on its mechanics. They just are. I realize comparing this game to some of the absolute best ever isn’t really fair, but it is obvious that it just doesn’t compare to the depth that those games offer. 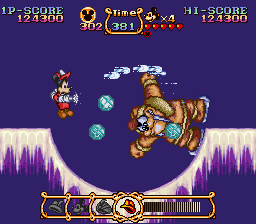 This is just the kind of game I wanted to go back and experience with this project. Magical Quest Starring Mickey Mouse is a good game, but not a great one. It is the sort of game that is easy to miss at the time, but is a game that is worth playing. It looks good, sounds good, and plays fine.