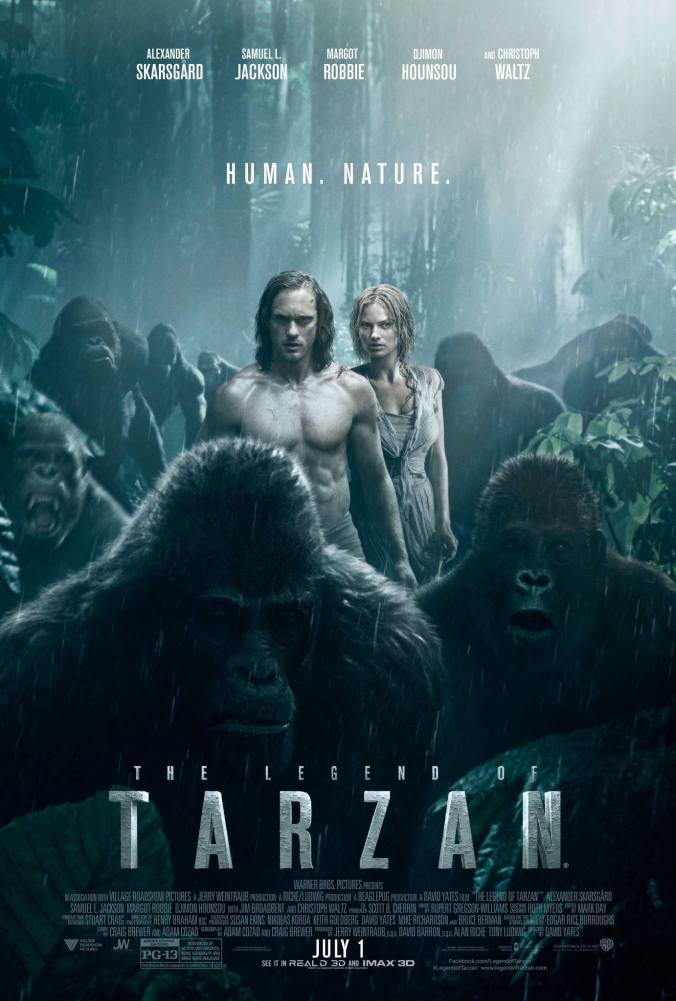 As a big fan of Edgar Rice Burroughs, I was excited to see Tarzan on the big screen. I hoped it would be as fun to watch as the criminally underrated John Carter movie from 2012. In its own way Tarzan is as hard a sell as the stories of that space faring Civil War veteran. There is something at the very least dubious about the racial politics of Tarzan, King of the Jungle. Still, I was in for what would hopefully be some exciting jungle action. While it certainly has its flaws, The Legend of Tarzan delivers enough of that to be satisfying.

To the film’s credit, it doesn’t try to side step the racial implications. Instead, it attempts to address the issue head on, with mixed results. Samuel L Jackson plays real life adventurer/politician/journalist George Washington Williams and the movie deals primarily with the Congo Free State and the atrocities King Leopold of Belgium’s agents perpetrated there in the 19th century. This is rather heavy stuff to graft onto a series of pulpy adventure stories about a man raised by apes, but The Legend of Tarzan does its best to conscious of its implications.

It just can’t square that circle, though. The attempts to eliminate the problematic elements of the Tarzan story only help to highlight them. Bringing in the real world history of the Congo and having the white savior rewrite it is a bad look. That is not how it went down in history, and it diminishes Williams’ story by making subordinate to Tarzan’s. It gives the Africans a hand in securing their own freedom, but only after being united by Tarzan. For all of the film’s good intentions, it still ends up feeling a little embarrassing. The same goes for Jane, who the movie spend an inordinate amount of time establishing the competence of only to still have her act as a damsel in distress for the bulk of the runtime.

Still, much of the movie works as a movie. Alexander Skarsgard is perfectly cast as Tarzan, though the movie keeps him civilized for far too long. Sam Jackson, Djimon Hounsou and Christoph Waltz give their usual quality performances. Margot Robbie is electric as Jane. The movie looks good. I fully bought Tarzan’s interactions with the various jungle beasts that he meets along the way. I absolutely loved that the movie was not an origin story. It did deal with Tarzan’s origin, but only in brief and effecting flashbacks.

The movie really sold me on this version of Tarzan. His relationships with society, with Williams, the animals and especially with Jane all felt real. I believed both his attempts to put his jungle life behind him and be the modern civilized man as well as his sliding back into his natural state. While I would argue that the movie did not give him enough action, what action the movie had was convincing.

Despite a sluggish start and some general hand wringing, I ended up enjoying The Legend of Tarzan quite a bit. The grafting on of real historical atrocity to the Tarzan story was maybe not the best choice, though it was a choice that shows that at least the filmmakers were trying to do something. Honestly, I was not familiar going in of the history, or of George Washington Williams. I am thankful to the movie for teaching me something, but the more I look into it the more I think that maybe they should have just made a movie about that real man. It kind of feels like that is the movie they wanted to make anyway.