I’m not finishing this series this year, that is becoming increasingly obvious, but that is not going to stop me from trying. So on with Wild Guns, a simple and delightful game from Natsume. Wild Guns is a shooting gallery game. Your character stands at the front of the screen and shoots enemies in the background. That is just about all there is to it. Still, Wild Guns remains a delight, as much due to its simplicity as despite it.

The game gives the player two characters to choose from, Annie or Clint, obviously named for Annie Oakley and Clint Eastwood. The story is that Annie hires space cowboy Clint to help her get revenge on the bad guy (who I am sure has a name but I can’t find it for the life of me) for the death of her family. The characters look initially like they came straight out of a western, but the world is full of robots and other science fiction stuff. The setting is one of the game’s greatest strengths. The Western and Sci-Fi themes mesh surprisingly well. The big, colorful graphics that flesh out this old west filled with killer robots is the stuff that all 16-bit games aspire to.

While the game is exceedingly difficult, it is rather simple to control. The d-pad controls both the character and the shooting reticule. The character moves around the foreground, shooting at targets in the background. You start with a pea shooter, but that can be upgraded to a shotgun or machine gun, as well as a few others. There is also a secondary weapon of a lasso that momentarily stuns the enemies you with it. You also have a screen clearing bomb and a melee attack for the handful of enemies that come into the foreground. At times bad guys will also toss dynamite at the player which can be tossed back at the bad guys. There is quite a bit the player can do for being stuck on a flat plane, but it all comes intuitively. Which is good, considering how ridiculously hard this game is. 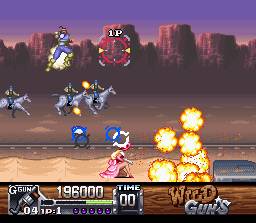 I played this game on the WiiU VC, with its rudimentary save state. Even with that considerable crutch, I found the game nearly impossible to complete. On easy difficulty. While the game is only about an hour or so long, it is not a game designed to be beaten in just an hour. Wild Guns requires the player to learn the game. There are a lot of enemies and a lot of bullets coming at the player. Knowing where to move and where to shoot is vitally important. I guess it is technically possible to react fast enough to clear many of the games hurdles, that is essentially what I did with my save state aides to get me through when my reflexes failed me, but this is a game that requires some learning if not explicit memorization. But that learning is how you play this sort of game, it is no different from Star Fox or Contra 3.

Wild Guns is the definition of cult classic. It isn’t a great game, not is it a game designed to pull in a large number of devoted followers. It does what it does exceptionally well, but this kind of shooting gallery game is always going to be something of a niche interest.