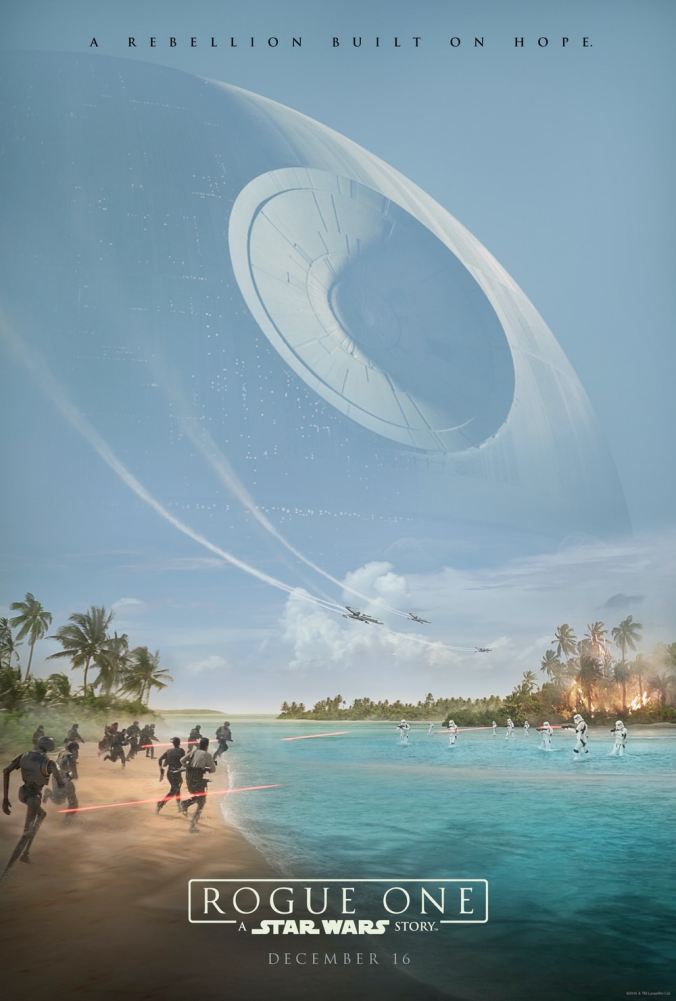 Like last years The Force Awakens, Rogue One is a Star Wars movie that exists to comment on Star Wars. Specifically on Star Wars: A New Hope. The Force Awakens was a restatement of purpose. It was A New Hope again, consciously and purposefully. It gave viewers new, immediately iconic characters to root for, but it didn’t break a lot of new ground. It was Star Wars as you always remembered it. I wonder how that is going to age, but it was the right move for last year, for getting people back into the series ten years after the middling prequels. Rogue One, on the other hand, seeks to remind viewers of A New Hope by filling in the cracks around that movie. It is a movie about how that movie came to be, with as many reminders as possible. It nears the ghoulish at times, like with its digital recreation of Peter Cushing as Grand Moff Tarkin, but for the most part it works at putting the viewer on the margins of the grand saga and giving a different perspective on the series.

Rogue One does have a completely different perspective than other Star Wars movies. This is not a tale in the grand saga of the Skywalker family and the force, while it is mentioned and plays a role in the movie, is not a big part of it. This is a grittier look on how the Rebellion got well and truly started, with Jyn Erso, the daughter of an Imperial scientist, conscripted by the nascent Rebel Alliance to find a message from her father that might give them information about the secret project he is working, which is in fact the Death Star. She is joined by Cassian and K-2SO, a rougher take on Han & Chewie to seek out her old mentor Saw Gerrera, who is said to have the Imperial Pilot that carried the message. Eventually this leads to them and a small handful of others taking on a dangerous mission as a last ditch attempt to give the Rebels a chance to stop the Death Star.

Perhaps the movie’s greatest flaw is that it doesn’t truly flesh out Jyn. It gives her a starting point and an endpoint, but it never really shows her change. Rogue One doesn’t do a great job of letting the viewer in on her thoughts, so it is hard to understand her changes. For the rest of the impromptu crew it works. The Viewer is meant to question Cassian’s loyalties at times, so his remoteness makes sense. The others from K-2SO, an amusing combination of C-3PO and Chewbacca, who is all quips to the badass duo of the force attuned blind warrior Chirrut Imwe and heavily armed Baze Malbus, are side characters with simple or no arcs, we are given all the information we need to sympathize with them. But Jyn, the protagonist, is kept just as far from the viewer as the rest. She gives a rousing speech before the start of the third act. It is a great speech, but it doesn’t really follow what we’ve seen from her character. It seems like there is a scene missing where she lets go of her reluctance to commit to the rebel cause.

Around the dangerous covert missions is the second point of Rogue One, which is that it works as connection tissue between the prequels and the original trilogy. That is where the numerous references to A New Hope come from; the movie is determined to set its place in the timeline to just before the original trilogy started. But there are also references to the prequels, like Jimmy Smits resuming his role as Bail Organa, adopted father of Leia. It is certainly a Star Wars movie, but while it does do anything to further the saga, it is a great story in its own right while also providing some much needed connective tissue.

Rogue One is deliberately not the crowd pleaser that The Force Awakens was, but for all that is was a movie about the series past, I think it delivered more new Star Wars moments. The characters, while in some cases reminiscent of other Star Wars characters, actually felt new. I don’t mean to denigrate The Force Awakens, which laid the seeds for the future of Star Wars and its character are sure to stick with viewers for a long time, but they also feel like there were created with more in mind than the story of just the movie. Rogue One just feels more impactful. As a one off, its character’s stories are told all in this one film. Between that and some of the best action scenes in the series, Rogue One is one of the most satisfying movies of the year.