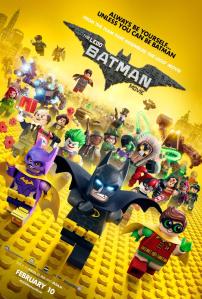 Anyone who saw The LEGO Movie surely remembers its delightfully egocentric take on that most famous superhero. LEGO Batman, as the title should make more than obvious, is more of the same that focuses primarily on him. It works and it moves fast enough that the few parts that don’t work go by so fast that it is easy to forget them.

LEGO Batman starts with a bang. All of Batman’s rogue gallery, from the Joker to Bane to Condiment King, team up to destroy Gotham City. They are defeated, of course, by Batman to a song he rapped himself. After that we get to see how Batman functions, or fails to function, as Bruce Wayne when Alfred forces him to attend Commissioner Gordon’s retirement party. It then proceeds to do some of the best renditions of classic Batman characters ever seen in a movie. Batman accidently agrees to adopt eager young orphan Dick Grayson and immediately falls in love with Gordon’s replacement: his daughter Barbara, only to be put off by her somewhat anti-Batman stance on crime fighting. Meanwhile, the Joker, fed up with working the other incompetents in Batman’s rogue gallery, devises a plan to prove to Batman that they are true nemeses.

I don’t think the movie does a great job with any of Batman’s villains other than Joker, whom Zack Gallifinakis plays as a woman scorned, jealous of Batman fighting around when he’s got the perfect villain right there. However, that is more than offset by how well it does with his supporting cast. Alfred is wonderful, as is the eternally upbeat Robin. While I am not a fan of making Batman and Batgirl a couple (It was a bad idea in the movie adaptation of Killing Joke, it is a bad idea here) the version of Barbara Gordon here is new and entertaining. I do wish the movie had spent a little more time with the superhero stuff; Batman’s villains get pushed aside rather quickly for the likes of Voldemort and the Eye of Sauron and the other superheroes only show up during a brief excursion to Superman’s Fortress of Solitude. But that is me letting the comic fan in me ignore what actually makes a good and accessible movie.

While LEGO Batman doesn’t go to the lengths that The LEGO Movie did to mess with the idea of these Legos actually being toys, it does have its own meta-narrative, one that is more interesting than the somewhat rote joke delivery vehicle that is the plot of this movie. From the beginning, LEGO Batman is having a conversation with previous movie versions of Batman. There are references to how Superman is now his greatest enemy and call backs to the Burton movies. The one that most frequently gets singled out is Batman 66. At first that Adam West version of Batman is held up for ridicule, dismissed by Batman. But with the reluctant addition of Robin to his crime fighting, the 60’s Batman starts to become more and more relevant. It really works, though I don’t know that Batman ’66 really needs vindication, especially not in the eyes of anyone paying money to see LEGO Batman.

LEGO Batman is really good. It is a comedy that is suitable for children but isn’t insulting to adults, a tricky balance that only Pixar seems to nail every time out. It isn’t an especially deep movie, but it is a fun distraction that is sure to be a favorite of children and parents for years to come.