Legend of Zelda: Breath of the Wild is amazing.  It more than lives up to the considerable hype.  I love it and am glad to say that the few trepidations I had going in have proved unfounded.  While most people seemed to be won over instantly at the idea of an open world Zelda, I was scared that Breath of the Wild would play like an open world game.  I feared that the tightly designed, often dense worlds of the Legend of Zelda would be replaced by a blandly generated open world. Both of those fears have been assuaged by playing nearly 20 hours of the game over its first  week after release.

While the openness is the first thing that grabs the player upon starting up the game, it obvious pretty soon that Nintendo and Zelda Producer Eiji Aonuma didn’t throw the baby out with the bathwater.  The prerelease hype and the reviews have all focused on its ties to the original Legend of Zelda, and that game’s influence is clearly felt, but it doesn’t ignore the series past that. The structure of the game has been rethought, continuing a trend that arguably began with Skyward Sword and was very evident in A Link Between Worlds, but the moment to moment gameplay is just another step along the evolutionary path that the series has been on since the series went 3D with Ocarina of Time.

I understand that many people found Skyward Sword stifling, but it controlled like a dream.  People will argue about the motion controls for sword fighting; I think they are being ridiculous, but setting the motion aspects aside, Skyward Sword was a delight to move around in.  That is something that has been true of the series since it went 3D.  Few 3D games feel as good to move around in as the Zelda games do.  There is a reason that so many games stole Z-targeting from the series.  Compare that to popular open world games like Grand Theft Auto or Bethesda’s output and it is night and day.  The player character in Skyrim glides over the world, never really seeming to interact with it.  Some of that has to do with the fact that Elder Scrolls games are designed to be played from the first person perspective, some of it has to do with the fact that Bethesda games have big, well considered worlds but play like janky pieces of crap.  Breath of the Wild takes the open world, but it still plays like Zelda, a feat that I didn’t think could be achieved, but they did it.  I thought at best we would have an Assassin’s Creed situation, games that play fine,but the player interacts with the world in very limited ways.

Then there was my fear that wewould get the usual open world, which usually translates to empty world.  The really open Zelda game was Wind Waker, which featured both small dense islands to explore and wide and empty ocean.  That was built into the game: the ocean is big and empty. The best Zelda games have forsaken openness for density. A Link to the Past’s Hyrule is not especially big, but there is a lot to find and do.  People love Majora’s Mask and that game is undeniably tiny.  The clear winner as far as game density goes is Skyward Sword.  There is the big, largely empty sky, but that exists mostly to let the player fly around on the back of a bird, once on the ground there is always something to do or see.  It essentially turned theoverworld areas into open air dungeons.  Their density made for difficult traversal, but unlocking the secrets of each of the three main areas never stopped being enticing. While not as dense as Skyward Sword, Breath of the Wild has kept that denseness while expanding Hyrule bigger that it has ever been before. This is an open world where little piece of the map has something to do or see.  Maybe it is just a simple rock moving puzzle to find a little korok spirit, maybe it is a shrine, perhaps a rare or unique specimen of flora or fauna and sometimes, rarely, it is just a beautiful view.

That beautiful view thing might be something people could say for many games, but I have not seen a game that astounds me like this game has with how it looks.  It is not the most technically impressive game in existence, but its art design is unparalleled. I have only explored at best a quarter of Breath of the Wild’s Hyrule and perhaps I’ve only seen the best of it, but if it can maintain this level of things to do and see over the course of what promises to be a nearly 80 hour game, it will certainly go down in history as an all-time great. 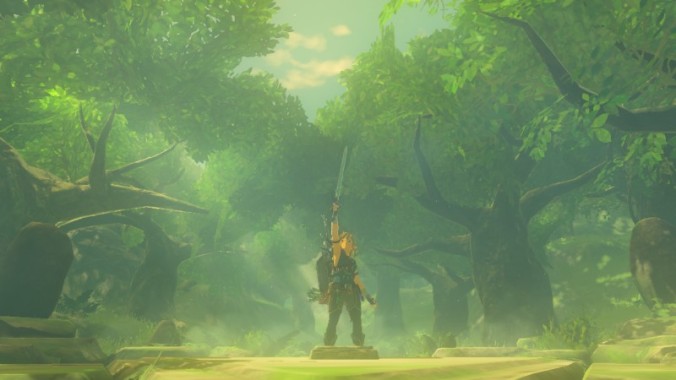 2 thoughts on “Early Zelda: Breath of the Wild Thoughts”