I hit four in April and I’m already close to hitting it again in May. I’ve finally cleared my stack of Christmas books, which means I have to do a little more thinking about what I read next. My big Charles Dickens project is looking like a bust so far, I’ve only made it about a quarter of the way through Nicolas Nickleby so far. Maybe it is more of a two year project.

This is the last of the books from my Christmas stack.  It is another thriller/mystery.  This one is about a doctor who goes missing while training to run a marathon running in the Appalachian Mountains. She wakes up with a bump on her head in the cabin of a mysterious stranger. He may or may not be responsible for her predicament, but he certainly won’t let her leave.  She is likely concussed and there is inclement weather outside.  Back in civilization, police are checking into her disappearance and their prime suspect is her suspicious, cheating husband.

I enjoyed it quite a bit, though it takes quite a lot of suspension of disbelief to keep engaged.  The leads are too extreme in their competency.  It also deliberately tricks the reader; not with clever misdirects but with having characters act in ways that don’t make sense for any reason other than to confuse the reader. SPOILERS The book sets up the husband to seem guilty and about halfway through he starts acting, and thinking when the book is from his perspective, as though he is guilty.  At first it is laid on so thick that it seems an obvious misdirect, then the character himself seems to confirm it, only for it to turn out to not be true.  Those annoyances didn’t really bother me; the book ends up operating at a sort of a heightened reality that makes that sort of exaggerated weirdness acceptable.  It’s a fun, fast read. 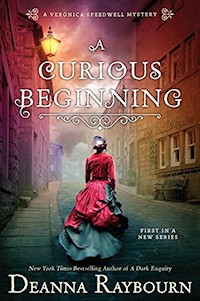 There is a lot to like about this Victorian mystery about a young woman lepidopterist who gets caught up in a big conspiracy.  The thing that kept me from really liking it was that there really isn’t a mystery.  Or more accurately, that neither of the two protagonists do a lot to solve the mystery.

Veronica Speedwell is a young orphan girl who after the death of her aunt first has a home invasion, then meets up with a man who claims to have known her parents.  He leaves her with a friend of his, Stoker, but before he can tell her anything, he winds up dead.  This sends Veronica and Stoker on the run and try to figure out who is responsible.

The problem is that most of the book is not spent solving that murder, or even the mystery of Veronica’s parentage.  The book just kind of floats along on unrelated subplots before it decides to get down the problem at hand.  And then most of the solving is done by the characters, with no evidence or verifiable information, reasoning out who is responsible and why.  It is frustrating. Still, I would be lying if I said that I didn’t enjoy it overall.  I did not find it to be an especially good mystery, but it was a genuinely fun read so that didn’t really bother me.

I read the previous set of Gail Carriger’s books, the Soulless series, a couple of years ago and if I recall correctly I greatly enjoyed them.  This one, which begins a series starring the protagonist of that first series’ daughter, I found somewhat lacking and I am a little unsure as to why that is.

There are some obvious reasons. From this first book, I don’t think Prudence is as interesting a protagonist as her mother was.  She seems to be all quirk with nothing really behind it, not a sturdy enough presence to build a whole series of books on. Hopefully she’ll grow as a character.  It also blunders into questions of colonialism; I am willing to admit I may be getting it wrong, but parts of this book didn’t sit well with me. Prudence has its characters take a trip India and deals directly with the problems of colonization.  It suggests that this alternate Britain made mistakes while colonizing India, it doesn’t actually note that being colonized itself was a pretty bad deal for the colonized.  It is hard to write a story in this setting without running into this problem, but I don’t think Prudence handles the issue well.  Mostly because dealing seriously with the issue would not go well with the light and fluffy tone of the book.

While I didn’t like Prudence as much as a character as her mother, that doesn’t mean I think she is a bad character. This book did a good job of setting up a new set of characters and a new set of problems in this already established world, while also giving fans of the previous series just enough cameos by old characters to make them happy.  Despite my problems with it, I liked this book enough to check out the next when I have time/see it on sale. 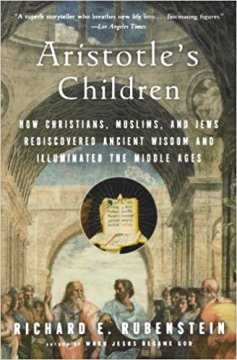 This book is about the rediscovery of Aristotle’s works in the 12th century, and how that rediscovery helped lead Europe out of the Dark Ages and into the Renaissance.  It is an engrossing, if dry, read that gets into parts of history that aren’t much known in the popular culture. While Aristotle was never really lost, at least not to people outside of the Western Roman Empire, its rediscovery in Spain by a combination of Christians, Jews and Muslims, is an interesting part of history.  How his teachings were dealt with by the dominant Catholic Church, which also controlled most institutions of learning at the time, is only slightly less engrossing.  Aristotle’ Children is a slower, more ponderous read than many of the historical books that grab my attention, but it is no less enlightening.  It can be difficult to get through at times but it is definitely worth it.