Super Mario 64 is without question one of the most influential games ever made. It was a trailblazer; the first game to prove that you could make a fun game in 3D. It is, however, still an early 3D game and it plays like.  Super Mario 64 kind of holds up perfectly and it kind of doesn’t hold up at all.

This was my first time playing Mario 64 in years. I was one of those oddities that owned an N64 but never owned Mario 64.  By the time I got my system, I had already played most of the game at friend’s houses and I could borrow it from any number of them at any given time.  I lived in some sort of anomalous bubble where everyone owned an N64 and the PS1 was something of a rare breed.  So I played my fair share of Mario 64, but it wasn’t a game I could easily revisit. Playing it now was surprising in how much of the game held up perfectly, but other parts had aged as badly as any game of the era did.

Super Mario 64 is a wonderfully crafted game.  Each of its 20 or so stages are dense little environments to explore in.  They provide the perfect playgrounds in which to utilize Mario’s expansive move set.  There is an array of challenges, with stars alternately hidden and sitting in plain sight in hard to access areas.  It is a game the drops you there and just lets you explore.  Wonderfully, almost none of it is mandatory.  I don’t think you have to collect a single red coin to beat the game,  so long as you are not going for all 120 stars. Super Mario 64 is very much the proof of concept for what a 3D game could be.

Unfortunately, some things on the technical side let the game down. The camera is the big offender.  Getting it to show the needed angle is a significant battle and makes portions of the game much harder than they have any business being.  The controls also feel primitive.  Mario is fun enough to move around, but trying to read a sign is an exercise in frustration, as is lining up a punch.  It is really any of the fine controls that really hold things up.  Running and jumping feel great, but anytime you have to slow down and be precise the frustration mounts. Swimming manages to combine the worst of the camera and the controls into one awful experience.

A lot of the later stages were somewhat unfamiliar to me.  I know the first handful very well and with the exception of [water stage] can relieve them of their stars pretty quickly.  But the back half of the game, while not new territory, was much less known. Having that somewhat new experience helped me sort out how much of my affection for this game is nostalgia and how much due to it being actually good.  As I mentioned above, there are frustrations, but even in 2017 there is a lot to love about Mario 64.  Most later 3D Marios returned to more of level structure.  A wise decision in my opinion, as that gave us the Mario Galaxy games, but there is certainly something to be said for the greater freedom and exploration to be found in Mario 64.  It is a different kind of Mario game than those that Nintendo has made in the last decade, and that at least makes it interesting. The relatively small size of the stages, at least by today’s standards, also allows Nintendo make it feel open while still being pretty tightly designed.  It doesn’t have the formlessness that often afflicted N64 action games. 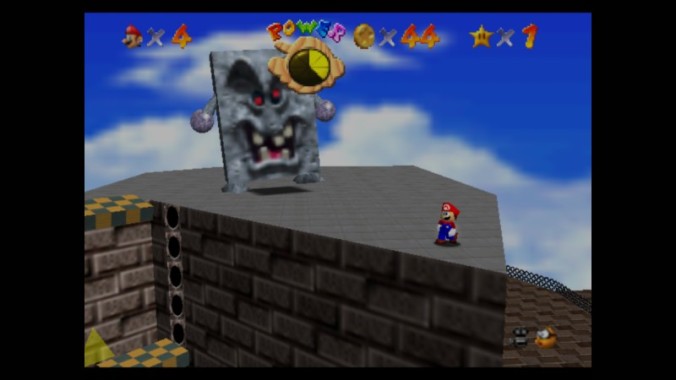 In many ways Super Mario 64 is a lot like Super Mario Brothers. There is something timeless about it, despite its primitive graphics, which held up much better than expected, and its imperfect controls, it still come together for something tirelessly fun and endlessly replayable.  It is the first of its kind and established paradigms that later games would improve upon.  It showed other games the way, but other games did it better.  Though not many, if any, on the N64. It might be more important than good, but it is plenty of both.