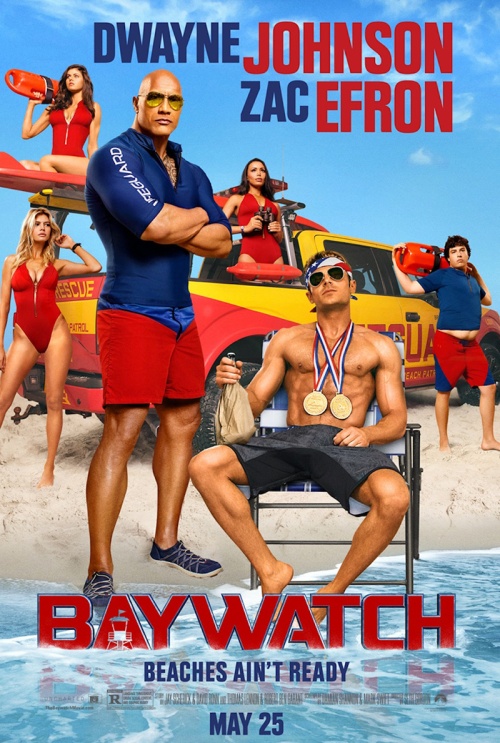 The trailers for Baywatch made it very clear what the film makers were trying to do, which is replicate the formula that lead to the success of 21 Jump Street. This should have been a success. Dwayne Johnson is always charming and Zac Efron has underrated comedic chops. Director Seth Gordon has turned in fine work before, like pleasantly surprising Horrible Bosses. While the cast is largely fine, the movie they are trapped in is a complete mess.

Baywatch proves unable to pick a tone and stick with it. It works best when the Baywatch team, led by Johnson’s Mitch Buchannon, is completely oblivious to the fact that lifeguards don’t investigate crimes. The team soldiers on, oblivious to the inherent ridiculousness of the situation. Less effective are the jokes about balls or the numerous slo-mo running jokes. Or anything involving the nerdy trainee played by Jon Bass. There are three or four tones going on and the only one that even kind of works is the played straight buddy cop movie that Baywatch sometimes wants to be.

I went in really wanting to like this movie. I love The Rock. He is frequently enough to get a movie over just on his charm. That is what this movie has going for it. Him playing a superhumanly competent lifeguard is fun, and funny enough that this movie didn’t need the wealth of terrible jokes, including some that just seem mean spirited for the sake of a few gross out moments. Zac Efron can be fun as a dimwitted foil for The Rock, but this movie has him play both the goof and the straight man, making neither work. Alexandria Daddario has nothing to do, nor do bit players like Rob Huebel, Hannibal Burress and Oscar Nunez. Priyanka Chopra has fun as the villain, but she doesn’t get enough time to play off the rest of the cast.

The movie just feels like a missed opportunity. This is a formula that can work, they have the right cast. But they are stranded completely by a lackluster script, assuming that there was a script. That is the biggest reason the humor falls flat; there are no funny jokes here. There are funny premises, but they are not taken advantage of for any real comedy. The action stuff works better, but it is still second banana stuff in what should be a comedy.

Baywatch is a bad movie that barely keeps it head above water thanks to an all-around charming cast.

One thought on “Baywatch Review”