I don’t feel like I’m being fair to Persona 5.  It is a great game.  In terms of mechanics and aesthetics there is nothing it doesn’t do better than its predecessors, which should be expected with nearly a decade between releases.  But my thought immediately after finishing it was that it was no Persona 4. What I’ve been forced to realize over the two months it took me to play this game is that that realization is as much about me as it is about the game itself.

Persona 5 is much like the previous two entries in the series.  It follows the same structure with mostly the same battle system.  It isn’t identical, P5 adds demon negotiation and some different damage types, but the bones are the same.  You still try to hit weaknesses to get extra turns.  The best new addition to the battle system is the baton pass, which allows you to pass the turn to another party member after you down an enemy.  That lets the player spread attacks around, adding another layer of strategy on an already robust battle system.  The Shin Megami Tensei super-series got that battle system mostly right as far back as 2004’s SMT: Nocturne.  The tweaks we got with Persona 5 are a small evolution, not a great shaking of the foundations. But when the system is as good as this one is there is no real problem with sticking with what works. Final Fantasy has got a lot of good miles out of that ATB.

The game also keeps the calendar based structure.  You play a year in the life of a Japanese high schooler, making friends and solving a supernatural mystery.  Each day has a rhythm and a purpose.  There are confidants, the new name for S. Link where the protagonist builds his relationships with the other party members, as well as a handful of classmates and acquaintances. While the main story goes on, that is how you get each character’s individual story.  It is all mostly like the previous two games in the series.

Though I still liked it this time, Persona 5 did not grab me like 3 and especially 4 did.  I don’t think that is on the game.  The battle system is definitely improved.  There are just generally a lot of little fixes that makes it a smoother experience.  While I don’t think the localization was quite as impressive this time as Atlus’s work has been in the past, otherwise it was a better game, at least mechanically.  I think it flails a little story wise, but only because its ambition is so much greater than Persona 4’s.  In that game, the party was solving a local murder mystery.  The body count rose, but it was very limited in scope. Persona 5 has the cast trying to reform all of society.  Their goals and scope are so much greater that it is hardly a surprise that it starts to break down a little at its edges.

I just didn’t connect with the cast, at least not until past the midway point, and in a game that is as much about the story as this one, not connecting with the cast makes it hard to connect with the game Was that because they are not as strong of characters as the gang from Persona 4? I would say they are not, but I think the reason I didn’t connect with them is that when Persona 4 game out, I was in my early 20s and just a few years removed from high school and still in college.  The tribulations of these high school students were relatable and felt real to me.  Now I am in my early 30s and I just don’t find these high schoolers relatable.  I was less inclined to like them, and the game had to work that much harder to get me on board. 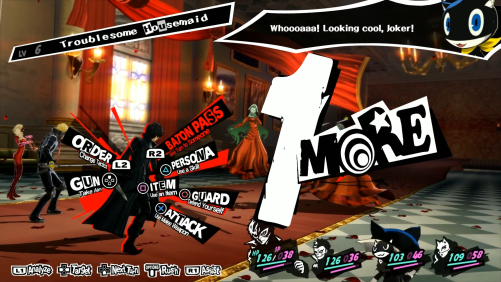 There is one thing that I think Persona 4 absolutely did better, which was to make the characters really seem like friends.  Even without the supernatural goings on, most of that cast would have been friends anyway.  Maybe not hiding pop star Rise or famous detective Naoto, but the rest seem likely.  Throughout the game I got the impression that these characters liked each other and would hang out as friends anyway.  Other than Ryuji and the protagonist, I didn’t get the feeling that Persona 5’s cast particularly cared for each other.  They seemed pretty disconnected from each other.

Still, I really enjoyed the game, it just isn’t a game that will come to mind when I think of my favorites like Persona 4 does.  Realizing that it never could is the hardest part to swallow.  I still want experiences like Persona 4 or Lunar 2 or the like, but I fear that even were I to find them I wouldn’t be able to appreciate them. Maybe that is a good thing, why should I like the same things at 20 that I like at 30. Or maybe I’m overreacting. Persona 5 was a lot of fun and I liked it.  Maybe the previous game in the series was just exceptional and this one was merely really good.