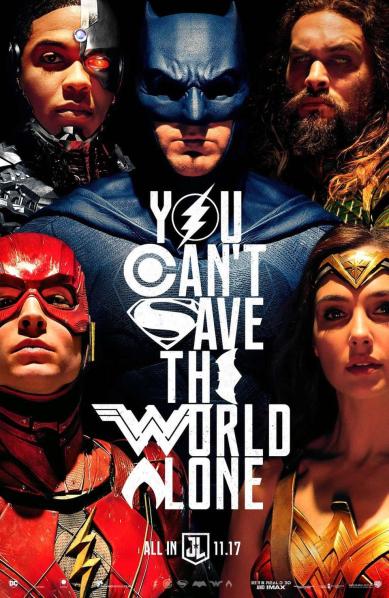 I guess it is possible to watch Justice League and be entirely unaware of it tumultuous production, but the tales of the production have appeared regularly on the internet over the last few years. This movie started as Justice League Part 1, but then the Part 2 got removed from the schedule. Before starting scheduled reshoots, director Zack Snyder stepped down due to a family tragedy, so Warner Bros brought on Joss Whedon to finish the movie. There were numerous other reported smaller issues. I can’t say that the movie completely overcame those troubles, but Justice League ended up being a lot more fun and entertaining that it had any right to be.

In the end, the production matters less than the product and Justice League must be judged on what it is; which is adequate in a fun but empty sort of way. JL is not helped by the fact that this has been a phenomenal year for superhero movies. The five others released this year, from Logan to Thor Ragnarok, are all widely regarded as excellent. Justice League is a middling piece of fun, which is a tough sell this year, when Fox actually got things right and Sony took a back-seat with Spider-Man. But Justice League is not a disaster and it is not a work with an off-putting, peculiar vision like Batman v Superman; it is the product of several cooks working their hardest to turn in something blandly enjoyable, an effort which is largely successful. Blandly enjoyable is exactly the route taken by Marvel’s Avengers, which is the most successful superhero movie to date. That movie is pure pop entertainment, but it isn’t really about anything other than getting to see your favorite heroes team up. Justice League has the tiniest bit more heft, but it tries for the same pleasures and largely delivers them.

It is definitely a sequel to Batman v Superman, starting in a world without hope after the death of Superman. Batman is tracking the first scouts of what appears to be an alien invasion. After confirming this, he sets out to gather the powerful individuals Luthor had been monitoring. Meanwhile, Wonder Woman is taking the first steps of truly returning to the world after 100 years. Together they gather Aquaman, The Flash and Cyborg to stop the invaders from gathering the Mother Boxes, vastly powerful artifacts that will terraform the Earth to be more like the alien’s home. The invaders had been fought off once, thousands of years ago, by the combined forces of the Amazons, Atlanteans and humans, with the help of some others; this time it all falls on the Justice League.

It mostly works as a somewhat awkward combination of the Avengers and Lord of the Rings. This movie is a sea of contrasts, and one needs to look no further than the special effects, which run from being truly excellent to shockingly amateurish. For the second category, many people will point to [slight spoilers] Superman’s digitally erased moustache; I would point to the very awkward horses ridden by the Amazonians. In other places you can see Snyder’s ponderous, weighty take on superhero clashing with Whedon’s flighty entertainment.

There has certainly been a course correction in terms of how the heroes are portrayed. Not in Wonder Woman’s case, Gal Gadot is still as perfect for the role as any actor has been to play a superhero since Christopher Reeve was Superman. But Batman, mostly I think due to the different tone of this movie, is a much lighter character than he was before. The new heroes a solid mix, with Cyborg being kind of dry and mopey, Flash being wide-eyed and scattered, and Aquaman being brash and macho. It is a nice, more emotive group that the previously stone-faced Superman and Batman. The new characters mostly work. The Flash steals a lot of the slower moments One can almost see the seems where chunks of the movie have been removed. Other than the central story, there is almost no throughlines for the characters. It gives the viewer a start point a small amount of development, but only one character feels like he has an end to his arc, that being Superman.

The villain, a C-list jobber named Steppenwolf, is the weakest part of the movie. There is nothing to him. He shows a little personality in the moments he gets to do so, but the movie tells you little of his story or his motivations, other than to conquer. He is powerful and dangerous, but he is a black hole. He feels more like a lieutenant than the big boss, which is what he is, though the movie only once mentions Darkseid. Darkseid, who will be seen next year in his Marvel knock-off form as Thanos in Infinity War, should be the villain of this movie. He is the big gun, and WB/DC held him back for a potential sequel. Personally, I wish they had went full Kirby with this, bringing in all the cosmic weirdness they can muster (much like Thor Ragnarok) but I never really expected that. Still, the villain needed to be something more than an ill-defined simplistic conqueror.

To its credit, Justice League delivers a lot of great moments, like Aquaman holding back the tide. It translates the wonder of the comic books to the big screen in moments that don’t quite add up to a whole.

Justice League is middling. It is not a complete mess like X-Men Apocalypse or Fantastic Four or Amazing Spider-Man 2, but it also not the home run that just about every other superhero movie this year has been. There are a lot of warts, but also a lot of stuff that is a lot of fun.