Only one book in November, along with a few comic collections I sped through with the intent of writing a longer piece about them that may or may not happen after finals. 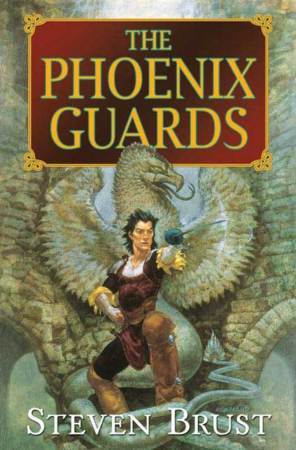 This is my first encounter with Brust. I quite liked it and will make a point to chase down some more of his stuff. The Phoenix Guards does very little to explain its setting, which I understand is used in his larger series of which this book is an off shoot, but that doesn’t hamper it too much. What The Phoenix Guards is is an homage to The Three Musketeers. A young man from the country comes to the city to join an elite guard, where he makes some friends and they have adventures. It is good fun, though while I am a fan of most of the setting stuff, I am not as fond of the prose style. It is deliberately styled to read more like Dumas, but that somewhat purposefully stilted was occasionally tiresome. I don’t have that much to say about it overall; it is a very fun romp that doesn’t really inspire any thoughts outside of the simple enjoyment of the adventure.

With Johns and DC getting ready to launch a follow up to probably their best loved story, I got it in my head to revisit the last time that Johns wrote a follow up to another much loved DC story, the Kingdom Come sequel Thy Kingdom Come. In this case, he did it with not only the approval, but the help of one of the collaborators in that first story, Alex Ross co-wrote and drew portions of this story. It was part of Johns Justice Society of America, the relaunched version that is mostly remembered for getting bogged down in this story. I disagree with that assessment; this is a long story but I think most of the individual chapters are very enjoyable. The plot in brief is that the Superman from KC ends up on Earth and teams up with the JSA, fortified with new members reminiscent of characters found in KC, as they deal with the emergence of Gog, the last of the Old Gods that died to make room for Jack Kirby’s Fourth World New Gods. It also deals with the emergence of the new Multiverse, brought back during Infinite Crisis, another time Johns wrote a follow up to a famous DC story. There is a lot going on, and I have more to say that I am saving for an eventual full post about it, but it works as a capstone on Johns’s JSA run, with the only flaw the story that came after it.