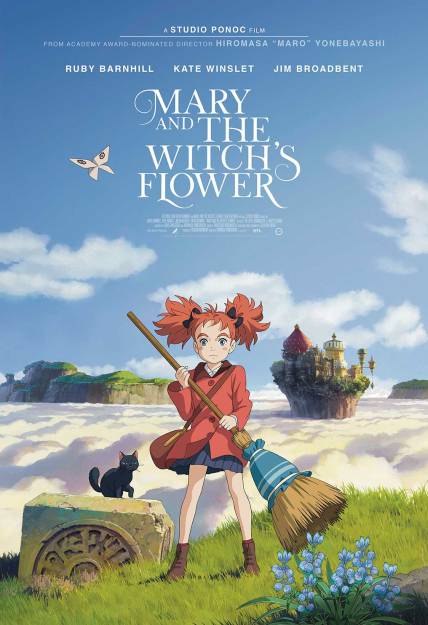 Mary and the Witch’s Flower is the first movie from Studio Ponoc, a successor to Studio Ghibli.  A few years ago, Studio Ghibli made some announcements that suggested that, with Hayao Miyazaki’s latest retirement, they would cease producing feature films, prompting some of its members to go their own way. This film is their first release and it shows that they are mostly carrying on the spirit of the previous studio.

Hiromasa Yonebayashi, director of Ghibli releases The Secret World of Arietty and When Marnie was There, directed Mary and the Witch’s Flower. It follows in that line of adaptations of children’s books that includes Kiki’s Delivery Service, Howl’s Moving Castle, and Arietty. It ends up feeling a bit like a Studio Ghibli greatest hits. That makes it sound worse than it is, this is frequently a touching and enthralling movie, but it never quite reaches the heights of its inspirations.

Mary and the Witch’s Flower follows Mary, a girl who feels like she is bad at everything, who moves in with her aunt in the country. She fights with a young boy her age and befriends a few stray cats before finding a mysterious flower in the woods. The flower gives her the ability to do magic. She finds a magic broom that whisks her away to a magic school in the sky, where things aren’t exactly what they seem.

I don’t want to spoil much of the movie, but it hits a lot of Ghibli notes. There is a young girl flying on a broom, like Kiki’s Delivery Service; there is a castle in the sky, like Castle in Sky. The movie also has echoes of films from Princess Mononoke to Ponyo.

The only real problem with the movie is that it doesn’t really have a resolution for its villains. They aren’t redeemed at all, but neither are they punished. They kind of learn the error of their ways, but it more that they just sort of fail. It is a real problem, the movie largely lack narrative stakes. It all just sort of happens.

Still, there is a lot to like in Mary and the Witch’s Flower. It ends up feeling much like Arietty; a little slight but otherwise enjoyable. It is a pleasant, enjoyable movie that doesn’t really have anything push it from being good to great.

One thought on “Mary and the Witch’s Flower”