I missed this game when it first came out. Actually, I missed the first two Mario & Luigi games when they first came about. I eventually picked up a used copy of Superstar Saga, but by the time I’d finished with that, Partners in Time was hard to come by and Bowser’s Inside Story was coming soon. Plus, the word of mouth of on Partners In Time was that is wasn’t very good. So I passed it by, letting it be a hole on the series while I busied myself with the wealth of other games available on the 3DS. As the years went by, the game’s reputation was cemented as the bad one. When the game came to the WiiU Virtual Console, I picked it up to be a completionist, but I didn’t have high hopes. I have never been happier to be wrong. I don’t know that I like this game more than Superstar Saga, but Partners in Time is an excellent evolution the series.

The big change to Mario & Luigi: Partners in Time was to add Baby Mario and Baby Luigi, making the pair a foursome. To be completely honest, it doesn’t quite work. It adds a layer of complexity, but the control in M&L was already complex enough. Now, special attacks require tracking four different characters, each represented by a button, rather than just two. It is hard to do. Adding two more buttons to combat made, for me at least, some of the attack items all but useless. That being said, the game doesn’t require the player to master all of its tools. All you have to do is find one or two that work for you and exploit them. It does work when the game forces the two pairs of brothers to split up. Those too infrequent bits are great, with the babies on the top screen and the regular bros on the bottom, moving them in tandem trying to solve puzzles. It is the absolute peak of the what this series offers. The only problems I had were likely caused by playing it on the WiiU rather than on a real DS.

The game also lacks a truly memorable villain, something that Bowser’s Inside Story and Superstar Saga have. In the first game there was Fawful, with his nonsense metaphors and showboating. In the third, we got the humorous take on Bowser. Partners in Time has … personality free evil mushrooms. There really isn’t anything to them, they are just a vague evil. That is one reason that Partners In Time is frequently considered lesser than other games in the series. But while that flaw is there, there are still a lot of great moments among the other characters. You get a lot of fun with a pair of Toadsworths as they attempt to keep the Baby Peach happy. There are a few, but impactful, scenes with Bowser and Baby Bowser. Then there is Kylie Koopa, who shows up throughout the game as some sort of Koopa Lois Lane. She is a delight. Not quite on the level of Fawful, but she is a character that should have had more staying power in the series. 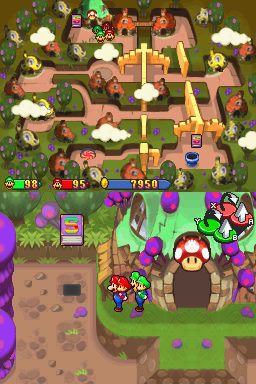 The other “problem” the game supposedly has is that it doesn’t really take advantage of its time travel premise. That is true, I guess. It really doesn’t do a lot with the time travel. Essentially, the current day Mushroom Kingdom, really just Peach’s Castle, is the hub for a game that takes place almost entirely in the past. Nothing you do as a player in the past really affects anything in the future, it is just another place to go to have adventures. It is a missed opportunity, but I don’t see the point in faulting the game for not doing something it never tried to do. It wanted the big bros running around with the babies, it really wasn’t interested in the mechanics of time travel.

The story has a lot of great moments that I don’t want to spoil, but one worth noting is near the end, when the brothers reach a Star Gate. The gate won’t let them pass because, it says, that Luigi isn’t pure enough. So there is a quest to prove his purity, at the end of which the Gate admits that he was just messing with Luigi and the brothers in general. It is pretty great.

Nintendo recently announced that they are putting out a remake of Bowser’s Inside Story, following up on the remake of Superstar Saga and skipping over Partners In Time. I get it, because BiS is the better remembered game and that is one that will sell more copies, but it feels like a missed opportunity to me. Partners in Time is a great game and with the kind of small tweaks and improvements that would come with a remake would go a long way to helping other people realize how good the game is.