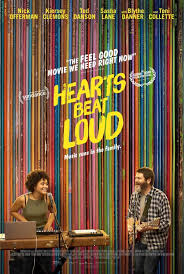 Hearts Beat Loud is a low key, charming little movie about a father and daughter. It doesn’t really do anything new or unexpected, but it is good hearted and enjoyable that it is easy to like anyway.

Hearts Beat Loud is a movie about the inevitability of change. Change isn’t innately good or bad, it merely is. Sam (Kiersey Clemmons) is graduating from high school and heading to college across the country. Her father Frank (Nick Offerman) is having a hard time dealing with it. Added on to this is that Frank’s record store is going out of business. The two of them are a musical family and after an evening of playing together, Frank becomes determined that the two of them will start a band. This is an enticing prospect for Frank, who used to be in a band with Sam’s mother before their daughter was born.

There is sadness is Frank’s obviously futile quest. The viewer knows that the worst possible outcome here is that Sam puts off her medical school dreams to start a band with her Dad, but as the movie seems determined to strip everything he has away from him you can’t help but sympathize with Frank a little bit. A big part of their relationship is obviously their musical connection and him wanting to keep them together with it is understandable, but also kind of selfish. Even Frank appears to know that it is a bad idea, although it is one that lets him keep his daughter around.

Sam appears to know this and for the most part shows little interest in giving up school to be in a band. But she also writes songs, because she is a musician. She also has to deal with moving across the country and giving up a burgeoning romance. There are tons of reasons for her to stay, but it is obvious that staying would be a limiting move for her.

In a parallel to losing his relationship with his daughter, Frank’s record shop is also going out of business. Like with the band business, Frank is given an opportunity to keep the record shop going, only it will mean changing it from what he knew. He has to decide if it is worth keeping what he had at the risk of changing it utterly, or just letting it go and grow to be something else.

A movie can’t put the emphasis that Hearts Beat Loud does on music and not make the music worth listening to. Fortunately, Hearts Beat Loud has some really great tunes and the significant time it spends letting its characters just play music is not wasted space.

Hearts Beat Loud is undeniably slight. It is a simple and low key affair buoyed largely by its charming cast, which in addition to Clemmons and Offerman includes Toni Collette, Blythe Danner, Ted Danson and Sasha Lane, and its engaging sincerity. A fun, touching trifle.