Immediately after I finished Yakuza 0, I popped Yakuza Kiwami into my PS4. I had played the original Yakuza back in the day on my PS2, but other than the basics of the story and vague recollections of greatly enjoying it, I didn’t remember much. Going off those memories, Yakuza Kiwami is something of an ideal remake. It keeps the core of the experience intact while updating and fleshing it out and embellishing things.

The story of Yakuza benefits greatly from the context added both by the remake and by Yakuza 0. The story here is probably the simplest that the series has ever been, but it also felt a little lacking. Kiryu takes the blame after his sworn brother Nishiki kills their boss when he tried to rape Kiryu’s, and Nishiki’s, love interest Yumi. Kiryu is released from a ten year prison sentence, excommunicated from his Yakuza clan and finds out that Nishiki has risen far in the organization and become corrupt. So Kiryu tries to get re-acclimated to life outside of prison, he gets caught in plots and counterplots that threaten to tear the Tojo Clan apart. What didn’t really work before was the connection between Nishiki and Kiryu. The original told you how close Kiryu and Nishiki were, but it never really showed that. That problem is exacerbated by the game keeping Nishiki off the screen for almost the entire game. Yakuza Kiwami adds more the start (I think; I don’t remember the first few scenes) and interstitials scenes showing Nishiki’s development while Kiryu was away. Those, combined with the added context from Yakuza 0, work to make the connection between Nishiki and Kiryu believable. It makes more sense that Kiryu wants to reconnect with him despite all he sees and hears. It is still disappointing that two of the most important characters in the game, Nishiki and Yumi, get very little time on screen. 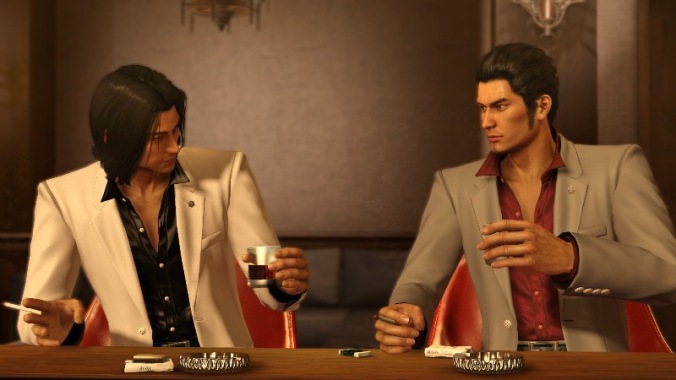 This game is clearly built on the same engine as Yakuza 0. It keeps the same array of fighting styles as that game, with Kiryu having three general fighting styles and one special one that is all but unusable until the end game. It all feels the same as the previous game, which is not a complaint. Both games are a lot of fun.

One of the biggest new change is the addition of the Majima everywhere system. Majima was a relatively small player in the first Yakuza, a memorable character, but not one that has a whole lot of plot significance. Since then, he’s evolved into one of the more loved characters in the series, up to his costarring role in Yakuza 0. To give him more to do here, Kiwami added Majima everywhere. With Majima everywhere, Majima takes it on himself to get Kiryu back into fighting shape after his prison stint by randomly fighting him all over town. With each encounter, or a set number of encounters, Kiryu traditional Dragon style is powered up. It is less annoying than it seems, at least initially. Majima uses all four of his fighting styles from Yakuza 0, so it isn’t the same fight over and over. He also trots out a series of costumes and hiding places to keep things interesting. And it works, at least until near the end of the game, when you’ve seen just about everything he has to offer and are trying to trigger specific encounters to finish upgrading the Dragon style. I don’t think the reward system for it was a good idea, since major parts of Majima Everywhere are locked behind story stuff, meaning Kiryu’s main style can’t effectively be used for most of the game.

Yakuza Kiwami is mostly just more of that Yakuza goodness. The game somehow manages the melodrama of the main plot with tons of inconsequential and downright goofy substories. Kiryu is a gangster with a remarkable aversion to actually do crimes, other than assault. Something new I noticed is how much this game draws from Battles Without Honor or Humanity, an excellent series of movies about the yakuza. The title is even referenced in a chapter title. The first movie starts with the forming of a yakuza clan in the aftermath of WWII as the rise and splinter and fall. A big part of that is one of the characters going to jail for a few years, only to get out and find all of his old friends either dead or changed. It takes up about a half hour in the movie, but it is essentially the same set up as Yakuza Kiwami. 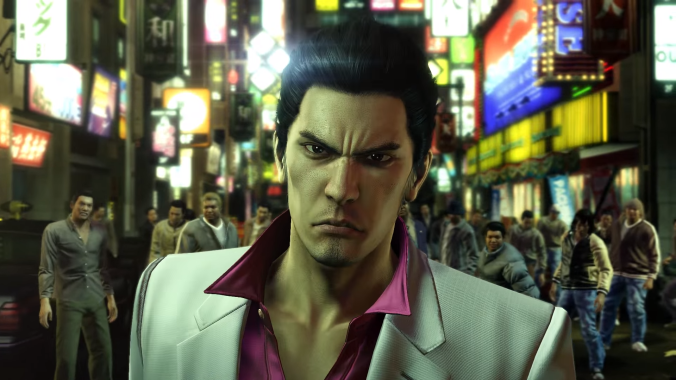 Yakuza Kiwami is good. Newcomers to the series can start either here or with Yakuza 0 and miss nothing. I’ve recently beaten 0 and 1, and I’ve got Kiwami 2 and 6 on deck. I think I might take a trip through the whole series before finishing up with Kiryu’s grand farewell in Yakuza 6. Mostly because my Mario replay is wrapping up and I need a new project to fail to complete.