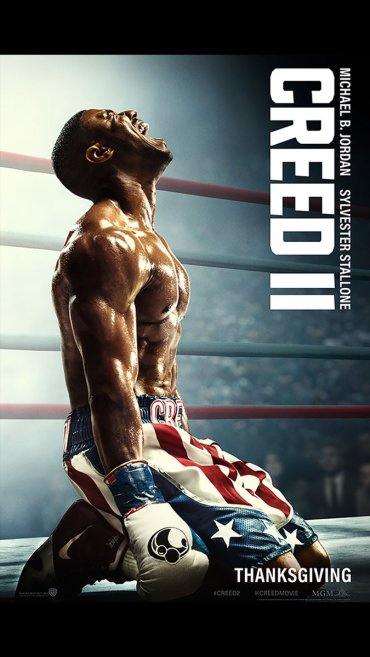 The first Creed was an excellent passing of the torch for the Rocky series. It kept the history of the long running series while opening up a lot of avenues for the future. It also helped that it was just a damn good sports movie, like the original Rocky, a movie were the sport is the focus, the heart of the movie is its characters. Adonis Creed was a nearly perfect new protagonist. As successful as the first movie was, a sequel was almost inevitable. While Creed II can’t match the first movie in any regard, it still manages to deliver a very entertaining movie that stands on its own.

The movie follows the very obvious next point for the son of Apollo Creed; it brings back the Rocky IV connection and has Adonis fight the son of Ivan Drago, the man who killed his father. The plot pulls a lot of notes from the first three Rocky sequels, telling its own story of fathers and their children. Adonis reaches the top and has to find out if he has what it takes to stay there or if he even wants to. This movie revolves around father and child pairings. You have the relationship, or lack thereof, between Adonis and Apollo. You have the surrogate father son relationship between Rocky and Adonis. There is Rocky and his strained relationship his son. Then there is Adonis and his newborn child. Finally, there are the Dragos, who also have unique relationship.

I don’t know that it is breaking any new narrative ground, but the fathers here have to make decisions about what is important to them. It is a decision that Apollo made when he fought Ivan Drago way back in Rocky IV. Now the fathers here face similar choices. Drago is trying to find his lost glory by training his son to fight in his place. Rocky, beaten down by life can’t sit by while Adonis makes the same choices as his father and can’t bring himself to reach out to his own son.

Thing is, it is still a boxing movie. It opens with Adonis fighting for the title, and then falls into the familiar refrain of a new challenger arising and Adonis having to find new strength to take him on. The movie still centers on the relationship between Adonis and Bianca. They are well rounded characters and thanks in large to excellent performances by Michael B Jordan and Tessa Thompson, they feel like real people. Bianca does get a little lost this time, she has her moments but doesn’t get enough to do.

The movie does rely a little too much on the past of the series. This is as much a sequel to Rocky IV as it is to Creed. Rocky IV was the bombastic peak of the series, the movie that went the biggest and most ridiculous. This movie tries to bring that bombast back down to something human. It mostly works, but jumping to this story seems a bit much coming from the largely very grounded Creed. For most of the movie Ivan Drago is the same cartoon villain that he was before. The tone from Rocky IV is not a great fit here and while the movie does its best to avoid it some of that creeps in.

What the movie lacks is just the filmmaking audacity and excitement of Creed. It plays exactly like you’d expect it play. It hits the familiar beats and in the ways you’d expect. I don’t mean to say there isn’t anything unexpected in the plot, only that the pacing follows very familiar tone and structure. It isn’t bad, it just lacks the spark that made Creed feel so fresh and special. Basically what I am saying the movie misses the touch of Coogler.

Creed II is a slightly disappointing follow up to Creed, but it is a solid addition to the Rocky series. It lacks originality, but it makes up for by simply being an effective execution of a formula. At its best, Creed II can be marvelously affecting. The ending alone makes it worth seeing.

As I approached the end of Suikoden V I began to feel increasingly wistful. I slowed down with playing the game, somewhat sad to end it. Mostly because I am fairly certain that this is the last time I will have the time to play through this game. My time for video games is limited and I likely will not have another 50 hours to put into what is honestly a fairly mediocre game. No matter how much I like it overall, I can’t deny the technical deficiencies that make the game something of chore to play at times. If in the future I have time to replay a game, I don’t think I am going to choose this one. Not when I could play Suikoden 2 or any number of SNES or PS1 games.

That doesn’t change my belief that Suikoden V is a very worthy game. It is. It’s plot and it general vibe I find incredibly enjoyable. I like large parts of what it does mechanically, pulling back from the mess that was Suikoden III’s battle system, but keeping a few if its twists to add to the classic formula. The addition of formations instead of just having two lines, making it easier to use the party members you want to use. The war system is a good evolution of what has been an afterthought in most of the series. The final dungeon finally does something interesting with the mass of characters that the player has recruited. That dungeon is right out of Final Fantasy VI, requiring the player to fill out three full six person parties to each tackle a different branch of the twisting maze of a dungeon. It is honestly pretty great. The game doesn’t prepare the player for anything like it. That multiple party set up happens repeatedly throughout Final Fantasy VI before culminating in the massive final dungeon. Here, the game just kind of springs it on you. Still, it is more good than bad. It just feels like an idea that could have been carried through the entire game instead of a one time expansion.

The ending of the story is kind of abrupt. The Prince and his forces have very few setbacks once he starts actually fighting. There is a final desperate gambit by the Godwins (I refuse to believe that name is a coincidence) that never seems close to working even as the Prince is forced to abandon his castle. Mostly because it turns the powerful dragon cavalry against his enemies. Otherwise, there are just so many unforced errors by the Godwins, choices that do nothing to advance their avowed cause but do help turn people against them, that the Princes victory seems inevitable.

The inevitability is part of what sent Sialeeds to the other side, as she switched sides mostly out of a desire to use the civil war as a way to do away with as many of the backstabbing nobles as possible. The fast resolution that the Prince was bringing things to would not have done solve the root problem. Of course, the game doesn’t really show that, it leaves it to interpreting one or two scenes and some incidental dialogue.

The end then comes as something of an anti-climax, with the villain finally discovering a way to use the Sun Rune without attaching it to anyone and the Prince having to stop him before he can do so. There is something off when the Prince sees visions of the people he lost along the way, his parents and his aunt most prominently, but also includes some of the villains. It strikes me as an odd touch to deliberately portray the villains as fascists then also show them smiling in heaven at the end, as though the game believes the villain’s assertions that there is little difference between them and the Prince, since they both want what is best for Falena, even though the Prince has prevented at least two genocides during the game.

One place the game unfortunately shines is in its cast and how ripe for further adventures they seem. The game almost seemed to be setting up a sequel following characters like Shula to Armes. Shula and his two aides/bodyguards are interesting characters that join very late in the proceedings. They feel like there is much more to learn about them, but they play a very small role here. I really like the cast of this game and was left wanting to see more from many of them, mostly in a good way. I’ve already written about how much I like Sialeeds, but there are plenty of other favorites. I like the family from Raftfleet; Logg, Lun and Kisara. It is kind of a sitcom family dynamic, but he can see why these characters work together. Kisara is the second command of Raftfleet, spending most of her time Raja. She is serious and respected. Her husband Logg and daughter Lun are introduced as something of joke characters. But as the game goes on you see the worth of Logg. He shows his bravery and his talents, being repeatedly relied on for dangerous missions involving boats and having a knack for getting things he is not supposed to. It is easy to see how Lun is caught in between her somewhat piratical, adventurous father and her respected mother. She wants to live up to both of her parents, and the game shows her at least partly on the way to doing so. I am also a fan of Nikea, Oboro and Dinn. I don’t think this cast overtakes the one from Suikoden II as my favorite, but there is a lot to like. 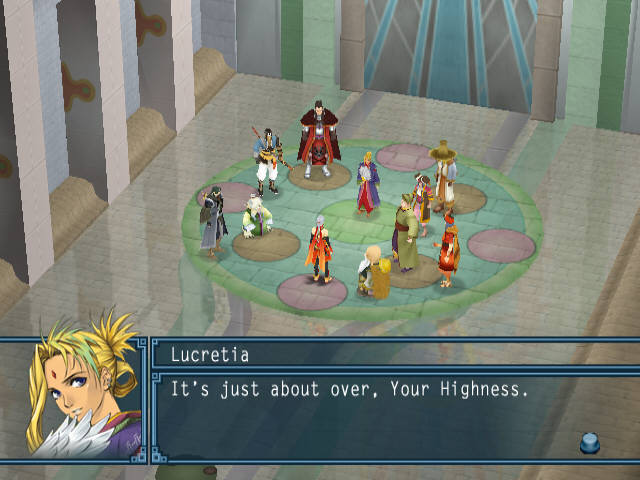 All the things I like is what makes this playthrough so bittersweet. I am fairly certain I will never play this game again. Which means I will never see the rest of the various interstitial scenes with these characters. I will never track down all the hidden things stuffed into the corners of this game. It isn’t just this game; I seriously doubt that I will have much time for a lot of time for replaying, or even playing for the first time, games I’ve played over the last ten or so years. That means those games will not have the time to cement themselves as favorites like a lot of my favorite games on early Nintendo and Sega systems have. I don’t foresee a time when I will go more than a couple of years without running through Chrono Trigger or Final Fantasy VI. I doubt I will ever touch many PS2 games again. But I am glad I took Suikoden V out for one last spin. It isn’t a classic. It isn’t great. It is somewhat underrated and a worthy successor to the Suikoden series one great game. I don’t harbor much hope that it will ever be accessible, but I hope a few more people give it a chance.