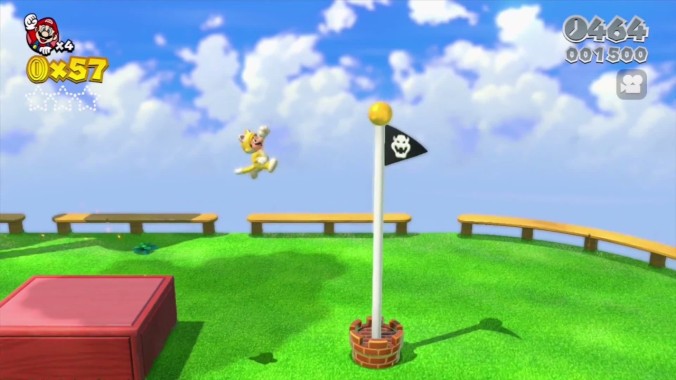 Like in Super Mario Bros. 2, Super Mario 3D World has 4 playable characters, initially. Mario, Luigi, Toad and Princess Peach all play roughly like they do in the NES classic. While the brothers themselves being playable it isn’t exactly a surprise, I believe this is the first time Peach has been playable since SMB2. It has a world made that is reminiscent of Super Mario World. It has the simultaneous multiplayer of the console New Super Mario Bros games. The touch of nearly all of the earlier games can be felt in this one.

Super Mario 3D World lacks a little of the wonder of Super Mario Galaxy. Its little diorama levels do not feel as alive as Super Mario Galaxy’s planets. That appears to be deliberate choice. Galaxy was constantly trying, usually successfully, to overawe the player. It tried to make each level seem huge while keeping the player’s focus on the usually actually fairly narrow path. Super Mario 3D World lets the player see the seems. It isn’t trying to be anything more than it is; and what it is is immediately comprehensible. That is necessary when trying to play with more than one player. Everyone has to know where they are and where they are going. The game is almost a complete repudiation of the 3D level design of Super Mario 64. That game attempted to create mini-worlds, 3D World’s levels are clearly artificial levels. It works, but it is a trade off. 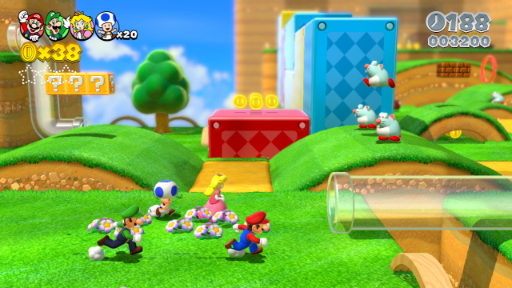 There is still plenty of wonder in playing the game. That wonder comes from the delight in the almost puzzle like playgrounds that are its levels. It isn’t the exploration of earlier 3D Mario games, but more of just exploration of how. Something the Mario series does better than anyone else is in its variety. The player’s abilities are actually quite limited, but the game is constantly finding something new to do with them. There are a decent number of power ups. The flashy new one is the cat suit, which dresses each of the playable characters as a cat and gives them vaguely cat themed abilities. With the suit, Mario can climb up wall and swipe at enemies. The levels that feature that power up tend to have more verticality, taking advantage of the climbing abilities. Then there is the double cherries which create a duplicate of your character. That mostly serves to create mayhem, but it also allows for some devilish platforming challenges, requiring the players to keep multiples alive. There are also a bunch of classic power ups with more limited general uses and limited unique power ups that exist mostly for the levels they are found in. Added to that are the differences in characters. To get all the collectibles, some stages require using a certain character. Otherwise, it is smart to fit the character to a stage. For most stages, a player will likely want to use Mario or Peach, depending on the player’s skill. Mario, as usual, is the all around character while Peach is slow, but her hovering jumps act as a useful crutch for new players. Luigi is the best jumper of the group and is needed to get to some hard to reach area, while Toad is the fastest and can simply run by some obstacles. The game, infuriatingly but understandingly, tends to put character specific collectibles in stages where that character is not the expected choice. Still, all that is superfluous and only really interesting on a replay.

For as good as the whole game is, and honestly Super Mario 3D World might be my favorite game in the series, the crown jewel are the Captain Toad levels. It makes sense that Captain Toad got his own spin-off based on those levels; they are a delight. While I called the regular stages dioramas, Captain Toad’s stages are the ones that really run with that idea. The stages are even more limited, mostly fitting onto one screen, and so is the character’s abilities. Toad can walk and he can walk slightly faster. That is about the extent of his skills. He can’t even jump. You have to mosey him around the stage snagging stars out from under the noses of oblivious enemies, mostly through stepping on switches and manipulating the stage. I love them.

The biggest flaw with the game is that Nintendo shut down Miiverse. Miiverse has always been a great idea that was never going to work. There is a lot of 3D World Miiverse functionality that doesn’t do anything anymore. One of the collectibles from stages are generally very neat stamps for Miiverse posts that are now useless. Miiverse created a sense of community in the game and you feel its lack. Even without it, Super Mario 3D World is still a damn near perfect game.