I managed an incredible feat in February, doing what used to be my routine. I read four books last month. One was a only anticipated release by my favorite author. Another was a book I had hoped to get for Christmas but didn’t so I bought it myself. I also read a couple of Douglas Adams books, because it was about time I did. 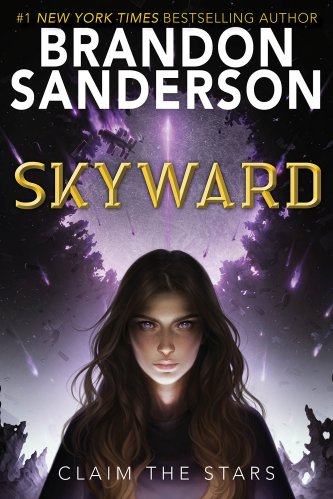 I sometimes feel bad when writing about Brandon Sanderson’s books, because I feel like I come off as very negative. I do have some problems with his prose, which are highlighted by this book, which is a young adult book. I think Sanderson’s prose is already kind of simple, and when it is further simplified for a younger audience it gets a little flat. I had that problem with this book; it just read sort of plainly.

That said, Sanderson has significant strengths, which is why I keep reading his books. I really like Sanderson’s writing, I just don’t think it is perfect. He does great work with world building and establishing characters. That is true here. Skyward has humanity exiled to a far off planet, stuck living underground to escape bombardment from the aliens who control the skies. Spensa wants nothing more than to be a pilot, one of those who fight the aliens to try to build a better future for humanity. At first her family’s reputation appears to keep her from that goal, she is allowed to join as a trainee. While she trains, she also finds a strange spacecraft in the caves that she works to get into working condition. The book is mostly team building and training, with Spensa learning a lot of hard truths. It builds to Spensa finally making a decision with the strange ship she found.

Skyward is solid. It lays a lot of groundwork and tells an interesting, if clearly incomplete story. I liked it well enough, but I am hopeful future books in the series are better. This one doesn’t feel like it really comes into its premise until near the end. The story it told is fine, but it feels a little like it was hiding all the good parts. I look forward to more.

If my math is correct, Early Riser is Jasper Fforde’s first book in nearly five years. That is kind of crushing for me, because I discovered him at about the same point he stopped producing new work.  Just as I caught up the well ran dry. But like with the people who complain about George RR Martin not producing A Song of Ice and Fire books fast enough, Jasper Fforde is not my bitch. I don’t get to dictate his writing schedule. I am just happy to have more from him to read. Early Riser did not disappoint.

Early Riser is set in a world where humans hibernate. The whole society is centered around this. There are a select group of people, the Winter Consuls, who stay awake all winter to make sure those who hibernate can do so in peace. The book follows Charlie Worthing, a newly accepted trainee Winter Consul, through much of his first winter awake. As tends to happen, he stumbles into important events that he doesn’t understand. His attempts to navigate through this dangerous events are what makes this book work. Charlie is not a particularly adept protagonist, he gets by mostly on gumption. He is smart enough to know his limitations and lucky enough to get through some tricky situation.

The book really doesn’t disappoint. It is a whole new world for Fforde to play around in. (I think it might actually be the same one from Shades of Grey, but it is different enough to actually be its own thing) He still plays wonderfully with skewed pop culture references, where he references something you know, but changes it just enough to make it clear it is something different. Fforde also never says no to adding a new weird idea into an already weird book. There is always something keeping the reader on their toes. The plot is a not especially intricate thriller, but that works with how intricate the setting is.  I have deliberately not written much about what actually happens in the book, both because explaining it is rather hard and because people should read it for themselves and I don’t want to spoil it. I loved this book; I am so happy Fforde is back.

This book is fun. It is a murder mystery where the murder itself is essentially a red herring. It plays with a lot of interesting science fiction concepts and weaves them together into the format of a detective novel, but the mystery was never really what you thought it was. I am given to understand that parts of this started as a Dr. Who script, and that makes sense. Adams’s wit is on full display here, making for a book that is a lot of fun to read, but it is much more tightly plotted than anything else I’ve read by him. That is not to say you could actually call it tightly plotted, it is only so in respect to Adams’s larger body of work. Still, it is quite an enjoyable read and I’ll finish up with its sequel sooner rather than later.

The Hitchhiker’s Guide to the Galaxy

I’ve got a full post about how much I like this story. Read that, I don’t have anything to add here.