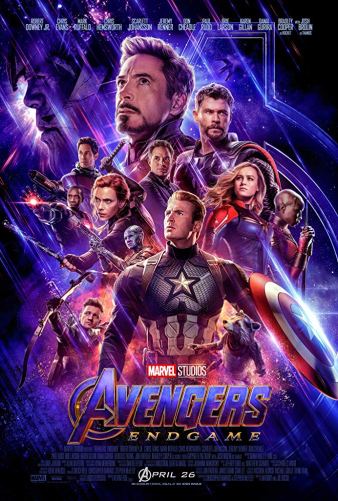 This is a hard movie to review.  I get why people love it, but it was such an uneven experience for me that I ended up walking out of the theater somehow completely satisfied and a little disappointed.  For more than two hours of Avengers Endgame’s runtime it is easily the best Avengers movie.  It is focused and narratively coherent, while also having a real solid theme and doing great character stuff.  It is everything I could want from superhero movie.  Then the finale hits, and none of the payoff lands.

Endgame is a movie about loss and grief and how people handle it.  The surviving Avengers all deal with it in a different way.  Natasha throws herself into her work, Tony retreats to his family, Steve pushes himself to help others through it, etc.  Thor, who lost more than anyone between Infinity War and Ragnarok, kind of gives up completely.  The movie lets each character process things in their own way and spends time digging into how and why they have reacted the way they did.  It is some of the best character stuff in any of the Marvel movies, let alone the always overstuffed Avengers movies.

I also loved the middle section of this movie.  The time heist was great.  They chose some really interesting scenes to revisit.  Sure, going back to The Avengers was a no brainer; I may personally believe it has aged poorly, but that was when the MCU went from a handful of decent to good movies to a full on phenomenon.  Likewise, jumping back to the start of the original Guardians of the Galaxy makes sense because that is when the movies first really left Earth.  The third drop in for the time heist is the most interesting choice, with Thor and Rocket stopping in during Thor: The Dark World.  While not all the movies have been equal in terms of how important they are to the overarching story of the MCU, the two that have been the most comprehensively ignored since their releases are The Incredible Hulk and Thor: The Dark World.  Endgame manages to pull more pathos out of that movie than was in it to begin with.  The time heist overall manages to be both a lot of fun, and really dig down into the core of most of it characters.  Especially the original Avengers, excluding the Hulk.  Tony gets to hash things out with his dad, Cap gets another look at the life he lost, and Thor gets a few precious moments with a world he has lost.  Then there is the big scene between Nat and Clint, which works for both characters, even if I think it doesn’t get quite get to where it wants to.

All is going well until the big climactic moment.  It is a big moment that brings in nearly every superhero to appear in one of these movies.  However, unlike the sprawling battle from Infinity War, this battle didn’t work at all for me.  The geography of the battle makes no sense, its objectives make no sense, there is no flow or feel.  It is just twenty or so minutes of largely pointless violence.  Getting to see some cool hero shots doesn’t really fix anything.  It takes a movie that had fun and entertaining and just lands with a big, deflating thud.

At least the wrap up after the fight scene was suitably emotional and well done.  This movie is definitely an end, and it clears the deck for movies to come.  Movies that, for the first time in like a half decade, we don’t know are coming.  Outside of a few obvious ones, at least.

Someone else, I’m sorry I don’t remember who for attribution, noted that these last two Avengers movies work as a strange pair of inverted expectations.  Infinity War was largely a downbeat, mournful adventure. Endgame, on the other hand, is sparkling light-footed meditation on loss.  The start of this movie is a fitting coda to its predecessor, the middle section is as much fun as any Avengers movie has been, but that ending lets it all down.  I know that is not a popular position to take, but while I applaud the ambition and scope of that last fight, it also worked to disconnect me from a movie that I had been largely in sync with until that point.  The point where when the final climax hits, I felt nothing at what was objectively a very cool line.  This is also a movie that, the longer I think about it, the less I like it.  There are a lot of unanswered questions and a lot of strange choices.  Still, it is a fitting and entertaining end to more than a decade of good movies.