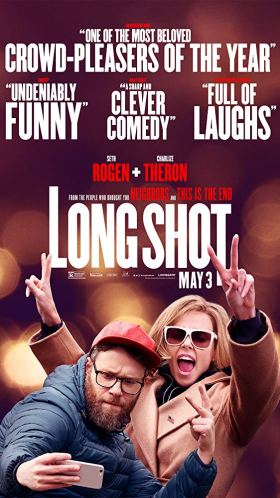 Long Shot is a solid romantic comedy with a political bent. It does not do anything that has not been seen before in the genre, but it is a well acted and well written, making it more than worth a watch. The movie stars Charlize Theron as a Secretary of State gearing up for a presidential run while trying to win support for a big environmental treaty. Seth Rogen is a recently unemployed journalist who is hired to punch up some of Theron’s speeches. During the trip, they kindle a romance.

As with most romcoms, Long Shot’s appeal comes down to its two leads and the chemistry between them. Here, Long Shot soars. Charlize Theron and Seth Rogen work surprisingly well together. Yes, it is that old schlubby guy with a beautiful woman dynamic, but it works here. It works because Rogen as Fred is genuinely charming. He is opinionated and a goof, but he also clearly shows what he cares about. Theron is similar as Charlotte, a genuine and likeable politician. You can see why she’s popular and why Fred has been in love with her for so long. They work together thanks largely to Fred’s mostly unselfish infatuation with Charlotte. He clearly has a crush on her from the start. He is also smart and funny enough to show to win her over. It really helps that Charlize Theron is always amazing. She seems perfect in nearly every role, and this is no different. This is her movie. Fred gets sucked into her orbit, but it is all about Charlotte’s journey and Theron sells that journey.

It also has some pretty great supporting players, from June Diane Raphael as Charlotte’s chief of staff to O’Shea Jackson Jr. as Fred’s best friend, to Bob Odenkirk as an actor turned incompetent president because the American electorate is a bunch of brain dead knobs who will fall for any stupid mother fucker no matter how obvious corrupt and shitty he is. It is a fun cast to spend time with.

The big conflict between them also works. Fred refuses to compromise, about almost anything. Charlotte perhaps compromises too much. They are both somewhat right, and the movie does a good job of showing how they each learn from the other. Fred becomes a little less strident, which had isolated and hurt is ability to actually accomplish anything. Meanwhile, Charlotte realizes, or at least finally finds the point, where compromise has given everything away and it is no longer worth it. Added to this is the optics of what dating Fred would do for Charlotte’s optics. Charlotte’s struggles also get into to the compromises that women in positions of power have to make that men don’t even consider. The movie could beat you over the head with that point, and while it isn’t subtle it mostly just lets it come out organically in the story.

The movie mostly gets along on the charm of its cast and some fun, snappy dialogue. It leaves the believability that is often a hallmark of the romcom. These are not normal people, they are extraordinary people. How well their struggles translate to relatable is up for debate. The movie largely works anyway just on charm. It is an easy, pleasant time in the theater. Long Shot is slight, but delightful.

One thought on “Long Shot”