Yakuza 6 was conceived and sold as the end of the Kazuma Kiryu story. And it is that; it is supposed to be the last time we see the Dragon of Dojima in a starring role in the series and it really does close out his story. I have some spoilery thoughts about how it does that which will be at the end of this post, but it is an ending. The Song of Life is a strange game for the send of the series iconic hero, as it removes him from nearly every character he has built up a relationship with over the course of the series.

Before I dig into the story, a few words about the gameplay, which is solid. I first experienced this new Yakuza engine with Kiwami 2, and this feels much the same way. The game is a little more fluid than it was before, moving more seamlessly into and out of fights with roving bands of thugs that accost Kiryu in the streets.

One thing that is absolutely disappointing with Yakuza 6 is how little the series usual cast has to do. Yes, it stars Kiryu and nearly every game in the series has introduced a full new cast to spend time with. But the series has built up quite the stable of regulars and most of them are MIA for the bulk of the game. If you played Yakuza 0 and love Majima, this is not the game for you. I don’t know that he even speaks a line. The same goes for Saejima, a co-protagonist of Yakuza 4 and 5. He appears briefly at the end and does nothing. Daigo Dojima is absent as well. Haruka Sawamura, who is vital to the plot of the game, is barely there outside of some bookend scenes. Kiryu’s detective friend Date makes the occasional appearance, and Akiyama at least gets to show up occasionally, but they are tertiary here, at best. Maybe it’s just me, but I expected a game that is saying farewell to its hero to let him interact a little more with all of the allies he’s built up over the course of the previous six games. 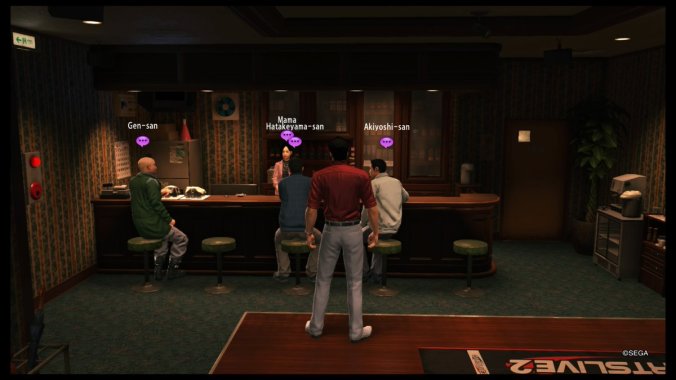 Still, the game fills in with some really good new characters. I have long been a defender of Yakuza 3, and one of the things I loved about it was Kiryu meeting a yakuza family that initially knew nothing about him, only to win the group over just by being awesome. Yakuza 6 does the same thing, and I think does it a little better. Instead of a family of just three, this one is a little larger and feels a little more fully formed. Plus, they are led by Beat Takeshi. Kiryu shows up in Onomichi looking for clues about what happened to Haruka. AMong the first people he encounters is the abrasive Nagumo. Soon, he meets, and fights, all four of the underlings of the Hirose family; Nagumo, Matsunaga, Tagashira and Yuta. Nagumo and Yuta quickly become close allies. It follows a familiar set up, with first they fight Kiryu, then they grow to respect him, then almost worship him. By the time you get to the end and a former foe is agreeing to go on what is essentially a suicide mission with Kiryu, it all feels just perfect. Which is what makes the ending such a downer.

Here is my big problem with the ending: it is not the ending to the game that preceded it. It is a perfectly understandable ending, and fits with Kiryu’s characters, but it flies in the face of the lessons he supposedly learned during the preceding 40 or so hours of game. It is also clumsy and occasionally aggravating. I am going to have to really spoil things to explicate this, so consider yourself warned. Yakuza 6 ends with the apparent death of Kiryu. This is a fine ending, though a little disappointing given the perpetrator. Still, Kazuma Kiryu shot down while protecting his Haruka is a perfect way for him to go out. After 20 minutes or so of ending, the other shoe drops. Kiryu is not dead. He survived the gunshots. Instead, he took a deal from the government to cover up certain revelations during the last act of the game and has to disappear forever. So he does, leaving his family behind. And that is where the game loses me. Kiryu deciding or discovering that his family is safer without him around and then leaving to keep them safe is a very Kiryu thing to do. But the game just spent it whole story showing why that is a bad idea. Again, the relationships between fathers and children is the heart of the game. And the game shows a multitude of ways in which they work and they don’t, and one big thing, outlined by Kiryu in a letter to Daigo at the end, is that a father needs to be there for his family. The game opens with Kiryu, in order to be with Haruka and the kids from the orphanage, going to jail for his Yakuza past. The idea is that he’ll serve his time and be allowed to be with them as himself. When this attempt to deflect attention fails and people are paying attention to Haruka, she leaves the orphanage as well, because the girl with the adopted yakuza dad draws too much negative attention. She doesn’t tell Kiryu this, so when he gets out and find her gone he sets off looking for her, and finds her in a coma, the victim of a hit and run, and mother of a small child. The father of that child is revealed to be a low level yakuza member, though like Kiryu a good guy.

Along with several other plot threads, the clear message here, to me at least, is that Kiryu going to jail to protect Haruka didn’t work. He wanted her out of the yakuza or yakuza adjacent life, but she ended up in it anyway. Again, the most important thing about being a father, according to Kiryu, is being there for your kids. He shows this by not being there for his kids. If the lesson of the game was that Kiryu’s yakuza past will always catch up to him and the only way to keep Haruka safe is to leave her, then okay. She’s grown by this point anyway. But the game teaches the exact opposite lesson, that bad things are coming no matter what and he needs to be there. Plus, Haruka takes over the orphanage with her (ex?) yakuza beau, so everything is right back where it started. The whole thing just didn’t work for me. That missed note at the end kind of soured me on what was otherwise an excellent game.

I’ll still play Yakuza games going forward, and am interested to see who will take over has the protagonist. Will it focus on Saejima and Majima? Akiyama? Those are good options who have been playable in the past, but they are all also kind of old. Maybe Yuta will take over, but if so, why get rid of Kiryu. I know the next game set in Kamurocho is this summer’s Judgment, which is about a detective. I’m not sure if any Yakuza characters show up.